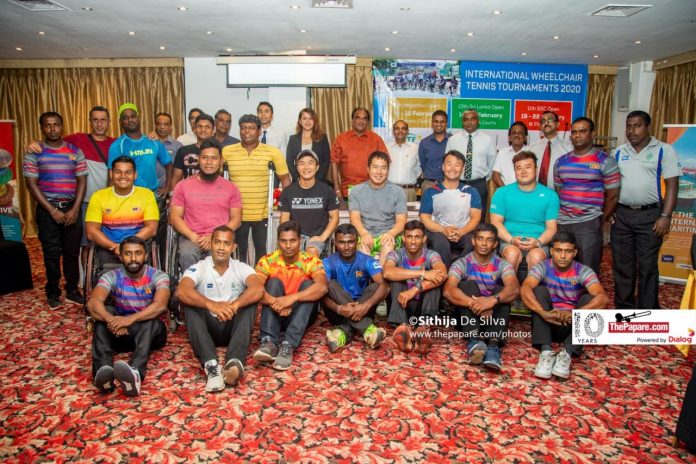 The Sri Lanka Tennis Association is set to host 3 back to back International Wheelchair Tennis Tournaments and the World Cup qualifier (Asian region) this year.

There will Prize Money of US$ 3000 at stake at the tournaments, making them one of the most valuable wheelchair tennis tournaments on the ITF calendar.

Two countries of the wheelchair corps were honoured at the…

The tournaments are expected to attract top-ranking wheelchair tennis players from around the world with players from South Korea, India and Malaysia already in the island.

The Sri Lankan National Team is coached by Mr Jagath Welikala and overlooked by Brigadier Shiran Abeysekea. Top Sri Lankan and Asian Para Bronze medalists T. Ranaweera and Dharmasena, along with Gamini and 10 Sri Lankan players will compete at these tournaments. The tournament will serve as an event for players to rack up International ranking points for the upcoming World Cup in Japan an Asian qualifying in Malaysia.

Speaking at the press briefing held to announce the events, President of SLTA Mr Iqbal Bin Issack said, “we are delighted to be hosting the highest prize money Wheelchair Tennis Championships here in Sri Lanka and are particularly proud that the ITF endorsed SL open being a suitable venue. SLTA is supporting this game for the differently-abled particularly to uplift the great game of Tennis”

Colombo International Container Terminal is the main sponsor for wheelchair Tennis in Sri Lanka and their tremendous support over the last five years has lifted up the game tremendously.

Speaking to the media, Mrs Catriona Jayasundara of the CICT said, “CICT has been with wheelchair tennis for the last 5 years and we have seen such a bunch of beautiful and very very talented gentlemen. I have seen these guys for the last fifteen years and I’m very inspired by them personally.”