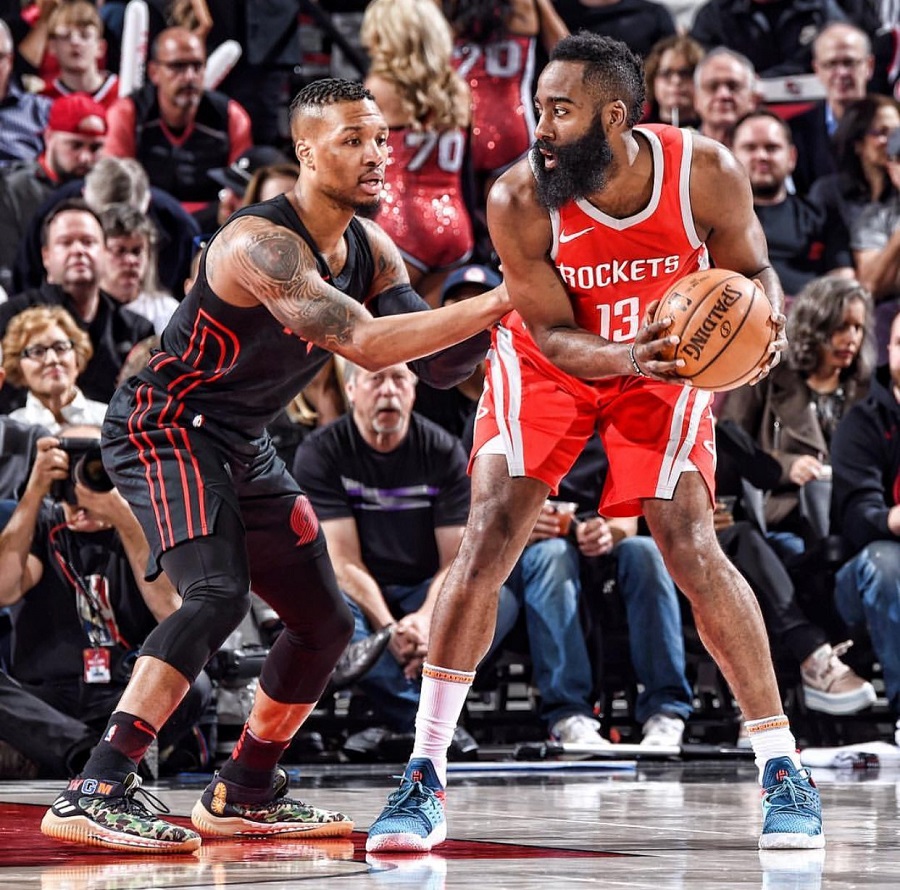 10 teams with 40+ wins. 2 teams with 55+ wins. Rockets with the best record in the league with 62-15. Need I say more to convince you that the Western Conference franchises have waged war against each other at the moment.

And boy isn’t he right?

Though the 1st and 2nd seeds seem to settle permanently for the Rockets and Warriors respectively, no clarity can be seen from 3rd to 10th in the West. Only 8 teams will progress to the playoffs once the regular season ends and we only have 5 more games to go. Tough times it is!

Houston Rockets is a franchise who showed their dominance since day one in the season. James Harden who was having the hot hand since 2016-17 season, continued on his merry way and currently has the highest points per game this year with 30.6 and averages 8.8 dimes per game as well. Harden is making the strongest case for the MVP this season amidst so many mind blowing individual performances by many elite players in the league. Through the contributions made by Harden mingled with Chris Paul’s veteran game play and the robust presence of Clint Capela in the paint, Rockets are now at a position in which they can take down a healthy Warriors squad.

The @HoustonRockets are the 6th team in @NBAHistory to have three winning streaks of at least 10 games in the same season. pic.twitter.com/0CYcmoc4V6

Golden State Warriors; the inimitable defending champions of the league are currently the 2nd seed in West with a 56-21 record. Since the beginning of the season the Warriors had a smooth ride until they hit the ugly bump of ‘injuries’ very recently.

On 24th March, the two-time MVP Stephen Curry was diagnosed with a grade 2 MCL sprain and will be re-evaluated in another 2 weeks. The absence of Curry was another blow to the Warriors as were already without Kevin Durant due to right rib soreness and Klay Thompson due to a fractured right thumb. Their other superstars, Draymond Green, Andre Iguodala, Jordan Bell and Omri Casspi also suffered injuries recently and currently everyone but Curry and Casspi are on board.

Kerr remains confident in his team.

Though the Warriors head coach; Steve Kerr further said “There’s no way he’s playing in the first round”, when he was asked about the starting point guard’s return, Curry still remains optimistic.

Stephen Curry says hopefully he’ll prove Steve Kerr wrong and try to get back during the first round.

Just a few days ago, the back up point guard of the Warriors, Patrick McCaw landed awkwardly at a matchup against the Sacramento Kings and is currently sidelined with no due date for return. Though there was no structural damage reported, McCaw’s left leg was totally numb for a while after the scary fall so he’s expected to go through a thorough checkup. Despite of the fact that Warriors are shorthanded at the moment, they are still cruising along.

One of the teams who had eye opening seasons this year is the Portland Trailblazers. Amidst the star studded Western Conference franchises, Trailblazers have popped above to secure the 3rd slot on the standings list with a 48-29 record. Damian Lillard who has had plenty of dashing performances throughout his career, was never appreciated in a way he deserves and finally his talent is widely recognized.

Not only Lillard, C.J. McCollum, Jusuf Nurkic, Al-Farouq Aminu and Evan Turner are making major contributions for the Blazers’ success and they’ll have to continue to do so if they intend to survive in the playoffs run as they are just 3 games ahead of number 3 Spurs.

In the upcoming weeks, they’ll be facing Rockets, Spurs, Nuggets and Jazz. Everyone but Rockets have permanently secured a spot so matchups against the rest are expected to be much more competitive and physical. Only time will tell who will survive as losing more than 5 games isn’t a luxury that the Western Conference teams can enjoy.

Despite of all difficulties that the Spurs had to go through at the beginning of the season with two of their superstars; Kawhi Leonard and Tony Parker, being sidelined due to injuries, now they sit 4th in the Western Conference standings with a 45-32 record. Even though Parker returned as the backup point guard for Spurs in November last year, Leonard is yet to secure a constant spot in the roster as the long saga of his quad injury still continues. Not only the players, even the veteran head coach, Gregg Popovich isn’t happy about the current situation the franchise is going through.

How far do you think the Spurs will go in the playoffs? ? #NBA #SanAntonio #Spurs

Though Leonard made a couple of appearances in last December and January, now he’s back in New York to continue rehabilitation for his quad injury for the second time this season. While the players have accepted the fact that Leonard might not return this season, the rumors suggest that the 2014 finals MVP who doesn’t show any discomfort with the injury, sitting on the sideline has unsettled some players. Danny Green, the starting forward for the Spurs replied to settle the stories once and for all.

Throughout the history of the franchise, Spurs are known to be a ‘sleeping beast’. You never want to poke so it’s hard to believe the fact that the Spurs are hobbling without Leonard as they always bring immense energy and physicality to the floor every day. With the incredible basketball IQ Popovich has, Spurs will surely give their best shot once the playoffs start but for the moment, ending the season with many wins as possible should be the goal. Spurs are holding onto the 4th seed, with the 10th seed just 4 wins away from them. Just 4 games! And it will decide the destiny of 6 teams!

During the last two games Spurs played, they successfully took down Thunder (103-99) and Rockets who were on a 11 game winning streak (100-83). Matchups between Clippers, Lakers, Trailblazers, Kings and Pelicans are due in the upcoming weeks and Clippers, Trailblazers and Pelicans who are also struggling in the playoffs swamp in West will surely bring their A games on.

Well that wraps up the recaps on the top 4 seeds of the Western Conference. Wait for the recap on the rest as we’ll be giving our predictions for each team in West along with it as well. Till then, keep balling!