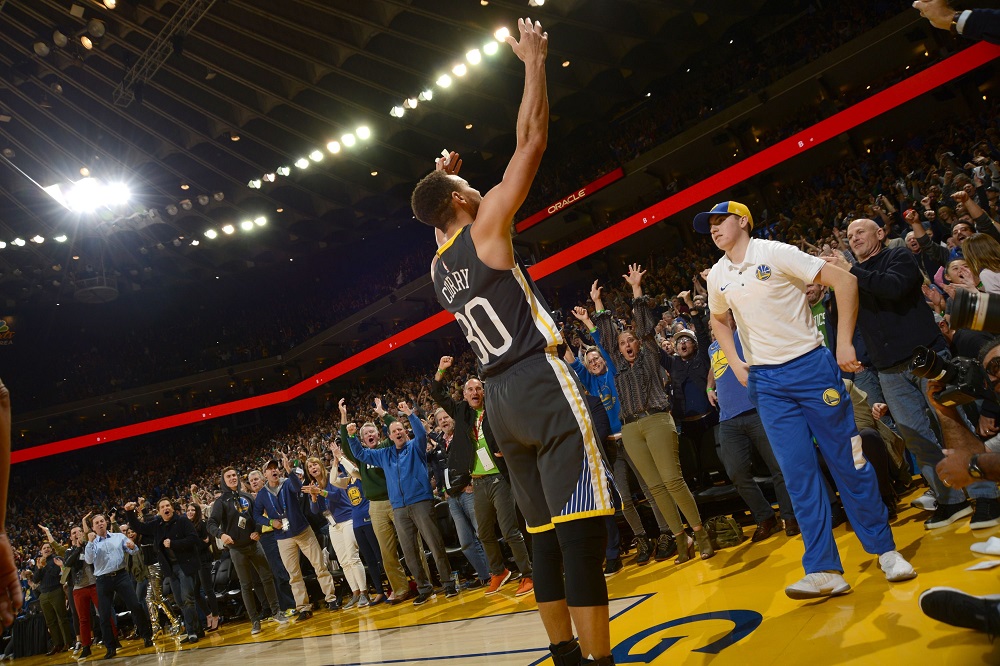 Golden State Warriors, the home of sharp shooters has always been making headlines. In the interim of toasting for having the best record in the league (41-13), Steph Curry, the baby faced assassin, just capped off a perfect month with the honor of being named the Western Conference player of the month for the 7th time in his career.

Curry, averages 27.3 points, 5.1 rebounds, 6.4 assists, 1.6 steals while leading the league in plus minus with 9.4, guided the team to a 11-3 record in January and made sure to take the big guns down with absolute ease.

Cavaliers, Rockets, Celtics, Clippers, Raptors, Bucks, Timberwolves, all were soundly beaten as Chef Curry averaged an NBA best 29.5 points per game on 51.4% shooting from the field and 46.3% beyond the arc. Mind boggling NBA high 62 3 pointers were made (62-134FG) as he again topped the league with 8 games with 5 or more 3s made. Within the span of 14 games, Curry exceeded the 30-point mark 6 times which was the 2nd most in NBA.

In addition to the scoring prowess that he possesses, his knack to share the ball was displayed by contributing 6.7 assists per game to the staggering and league’s best 30.3 assists that the Warriors average.

During a matchup against Dallas Mavericks on January 3rd, Curry netted a game high 32 points with the game winning 3 pointer, with mere 3 seconds left. Since then, his red-hot shooting streak continued, showcasing one of the most efficient shooting performances made by him this season.

Twice he was named the player of the week in January during which he shattered his own season high scores record.

45 points in just 29 minutes without playing the whole 4th quarter against LA Clippers on January 7th, marking a new career high in free throws made with 15 (15-16) was pure shooting magic on display by Steph. 52.3% from the field with 8-16 beyond the arc should satisfy anyone who asked to be entertained by the 2 time MVP. Guard-less Clippers had no answers throughout the game as Curry steamrolled over them with glee with a 3rd quarter that included a 23-9 run and the final scores read 121-105.

On January 28th, arguably the best point guard duo in the league battled for a W as Celtics were on a road game against the Warriors. Irving whose dribbling skills seem alien-like made sure himself and Curry gave the spectators’ their money’s worth. Irving went onto score 37 points but it was Chef Curry who stole the show with 49 points including 5 assists and 4 rebounds. As if the 8-13 beyond the arc shooting performance wasn’t dazzling enough, the stat sheet only had 1 turnover mentioned under Curry’s name.

Stephen Curry’s season-high 49 points are the sixth most points he’s scored in a game in his career and his second-highest point total at Oracle Arena.

13 of Curry’s 49 came off in the final 1:42 minutes in the 4th quarter as the Warriors edged over the Celtics, 109-105. MVP chants blew off the roof of the Oracle Arena as Curry’s mouth guard was hanging and the shots were dropping. 18 point 3rd quarter and 8 free throws made within the final minute of the 4th quarter shows the quintessential switching between aggressiveness and patience.

A matchup between the Celtics and the Warriors as NBA finals is hyped already and to see Curry stepping up and dominating the floor was exhilarating.

The top teams from the respective conferences in NBA battling out couldn’t have been any better. For any other player in the league, scoring above 40 is usually “going berserk” but since it’s Curry, it’s just a normal day on the court.

The dynasty that the Warriors have created can surely go on for ages to come and Curry still reaching elite standards in his version of the game is noteworthy.

Stephen Curry has always been a game changer. From an era of brute force, physicality and muscling your way down the lane every now and then, we now have swapped to a mixture of silky smooth shooting and eye popping dribbling displays to gain space and make your way through on the floor. Credit should be given to Curry for molding the game in a way that the size doesn’t matter on the floor as the 6’3″ 2 times MVP is now a world-renowned baller who’s bruising ankles and egos, eagerly waiting to add another championship ring at the end of this season.

So that’s a wrap for this week! Until next week, keep balling!