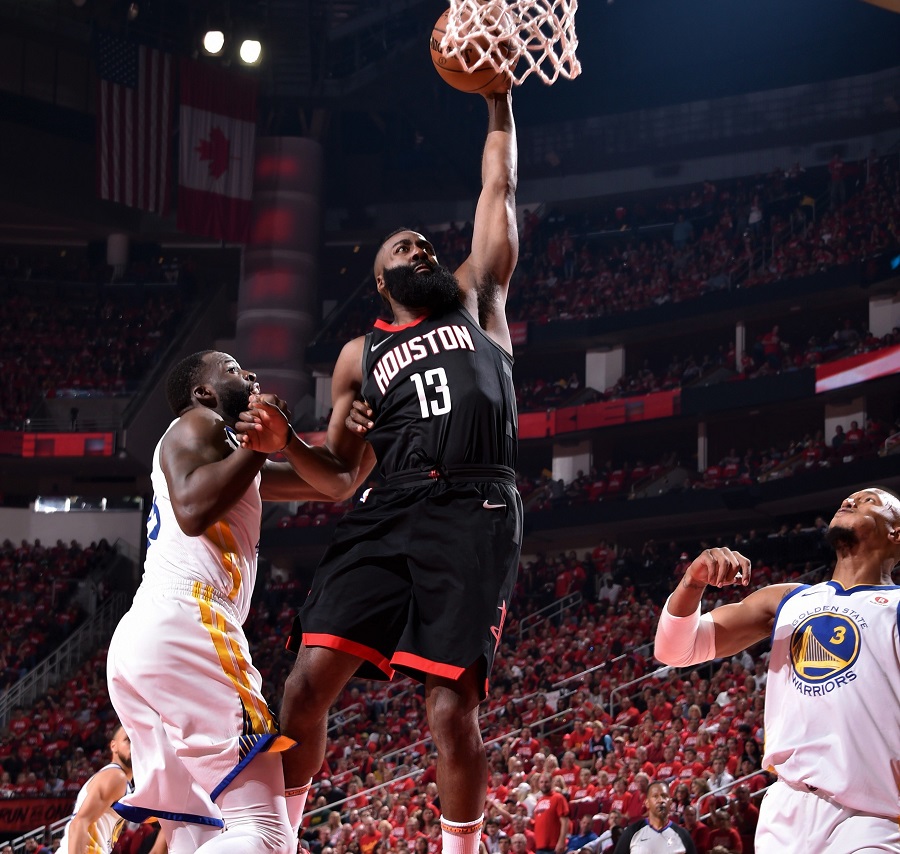 Throughout the entire regular season, the buzz for the predicted conference finals matchup between the Warriors and Rockets was phenomenal as the two teams emerged as high powered offensive franchises since the commencement of the season. As Rockets and Warriors are finally scrambling for the Western Conference title, it’s safe to say that the battle has been even better than what the NBA fandom anticipated.

With 6 games done and dusted, Rockets have made an implausible accomplishment of tying with the Warriors 3 all, going into game 7. Many would have chosen Warriors over Rockets, favoring them to make the fourth consecutive trip to finals but Rockets have busted up all predictions.

Since the beginning of the conference finals series, the Warriors were keen to dominate as they snatched a win despite the Rockets having the home court advantage. Rockets who maintained a home court record of 34-7 in the regular season bounced back with a win to tie the series as the scores read 127-105.

Meanwhile Warriors who haven’t lost a playoffs home game since NBA finals 2016, held their ground for game 3 but a surprising win by the Rockets in game 4 not only leveled the series, but also sent a clear message that they are here to play. To add more context to the state of turmoil that the Rockets aggression has created, Warriors failed to grasp a win in game 5 as well.

The Warriors have lost their last two games despite recording a higher field-goal percentage, 3-point percentage, and free-throw percentage than the Rockets in each game. No other team in NBA history has suffered back-to-back losses like that in a single postseason.

Game 4 and 5 were exhilarating nail biters as wins were up for grabs for the better team of the day. Rockets emerging victorious on both occasions were mainly due to timely buckets being made amidst shooting woes by both teams.

In game 4 with an 80-70 score at the end of the third quarter, Warriors had a comfortable lead of 10 points. Coming off a 34 points third quarter fueled by Steph Curry who found his rhythm and went 4-7 from the 3 point territory, many would have assumed that the Warriors were on the verge of a comfortable victory. Being unable to make buckets and maintain the lead, made them pay the dues as Rockets outscored Warriors for the fourth quarter, 25-12 and tied the series at 2 games apiece.

Warriors only managed to make 3 field goals out of 18 attempts for the entire final quarter and none of the made shots were 3 pointers which was highly unlike the Warriors we know of. Amidst the uncharacteristic shooting inability shown by the Warriors, Rockets managed to edge over and create a 5 point cushion with 2:27 remaining on the clock as Chris Paul assisted Eric Gordon for the only 3 point shot he made throughout the game. Talk about luck!

While out rebounding the Warriors in the final seconds which provided ball possession, Rockets somehow managed to push the Warriors players into tough spots offensively as they continued to struggle to make the ball fall through the hoop.

As the series was leveled, game 5 was held at Rockets home court and they surely managed to reap the perks of it. Despite of the sparkling start they made with a 11 points advantage at the end of the first quarter, Warriors pruned the lead and managed to stay neck and neck with the Rockets until the fourth quarter.

Since the commencement of the final quarter, it was all a “CP3 (Chris Paul) show” at Houston. For four consecutive plays, Paul managed to create a mismatch on David West through switching screens and capitalized with 3 mid-range shots and a double clutching 3 pointer. The only response to that by Coach Kerr was taking West off the floor for good. The separation between the two squads began to visualize after Kevin Durant fell for a pump fake by Eric Gordon at the 3 point line which resulted in a shooting foul and addition of 3 points from the charity line.

Adjustments made for the poor offensive fourth quarter in game 4 by Rockets were distinctly portrayed by attacking the basket to cover up for the missed jump shots. For every single bucket made by Rockets, Warriors had an answer until a costly turnover and a foul committed by Draymond Green with 2.45 seconds left on the clock and it relinquished the grip they had to turn the tables over. The scores read 96-94 with 2 point lead by the Rockets and it was extended by Eric Gordon and later by Trevor Ariza who was fouled as Curry failed to bank a shot in the final seconds.

The domineering force behind Houston managing to clinch 2 Ws (Game 4 – 95-92, Game 5 – 98-94) is the defensive and offensive intensity that they brought onto the floor. James Harden putting Draymond Green on poster dunks is nothing but the best example that encapsulates game 4 and 5.

Apart from the offensive intensity, it’s mind boggling to comprehend the fact that Houston have managed to shunt the offensive flow that the Warriors possess as they were unable to exceed the 100 point mark for two consecutive games now. Throughout the regular season Warriors claimed the 1st slot in offensive rating and assists per game while averaging 113.5 points. During the 3 loses that Warriors suffered, they average a meager 97 points on a 43.1% field goal percentage and 33.7% 3 point shooting percentage to pair up with 17.7 assists and 16.3 turnovers. Inability to take care of the ball and swing the ball between players has diminished the invincible stature of Warriors.

Despite of the blatant criticism received throughout the season for isolation ball playing, Rockets now have a chance to reach the NBA finals and they only need one more win. For the upcoming week, one of the major concerns will be missing the star point guard Chris Paul in rotation due to a hamstring injury he suffered with 22.4 seconds remaining in the clock in game 5 as he tried to make a go-ahead fadeaway jumper against Quinn Cook. CP3 has made major contributions and kept the Rockets in lane as James Harden only averages 27.4 points on a 41.4% field goal percentage and a peculiar 24.5% 3 point shooting percentage in the series. If the rest of the roster steps up as they have already, it’ll be a herculean task for the Warriors to defend their championship this year.

If the Rockets secure a win either in game 7, the momentum that they’ll be carrying will surely help them thrive in the finals no matter the opponent. Transferring the defensive energy into offense has paved them the path to the conference finals and only one single leap is needed. By next week, we’ll know for sure whether Rockets are as good as advertised throughout the regular season.

So that’s a wrap for this week on NBA playoffs conference finals via ThePapare.com. Till next week, keep balling!