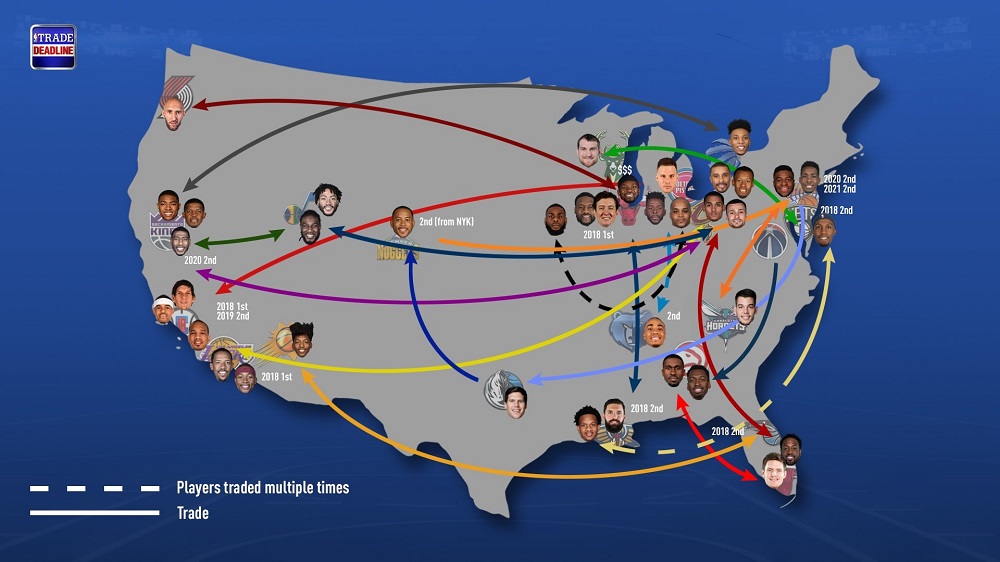 NBA trade deadline which ended last Thursday, zoomed in without much hype but ended as if a hurricane blew by. Most of the teams were settled upon not changing their rosters but adding more talent if possible. But a few franchises thought otherwise and really shook things up.


Here’s a roundup on the notable trades since the beginning of February.

Cleveland Cavaliers, who were expected to make some headlines, surely did so, in a larger magnitude. 6 players (2 starting, 4 rotation) were traded leaving only 4 out of their 2016 championship roster. Lately the Cavs have been struggling immensely on and off the court due to lack of chemistry, energy and commitment from the players and gobs of locker room shenanigans which reduced them to a 5-8 record in January.

Cavaliers first pulled the trigger trading Isaiah Thomas, Channing Frye and their own 2018 first round pick for Jordan Clarkson and Larry Nance Jr. from Los Angeles Lakers. Cavs added much needed athleticism, scoring prowess and youthful presence at the defensive end while the Lakers added a top pick with the added bonus of clearing cap space to pursue free agents with maximum contracts next season which is a situation with much more gravity in the long run.

Lakers are shifting their focus to the 2019 free agency class. Would y’all like to see this happen? 👀 #NBA #LALakers #Lakers #KawhiLeonard #KlayThompson

Cavs also engaged in a 3-team blockbuster trade which sent Jae Crowder and Derrick Rose to Utah Jazz and Iman Shumpert to Sacramento Kings for whom they received George Hill from Kings and Rodney Hood from Jazz. Hill is a veteran two-way player with a 45.3% 3-point shooting percentage which is the 3rd best in the league while Hood averages a career high 16.8 points per game which will immensely improve the Cavs bench scoring.

Meanwhile Derrick Rose is expected to buy out of his contract from Jazz and at the moment Minnesota Timberwolves and Washington Wizards are the front runners in pursuing the 2011 MVP.

The trade that stood out of the 6 the Cavs did was them sending Dwayne Wade back to Miami Heat in exchange for a 2024 second round pick. Wade who was a major scorer off the bench for the Cavs seemed thrilled with the situation and will be the spark that Heat needs once the playoffs come.

Truly happy for my brother @dwyanewade!! It’s how it’s suppose to be. Love you my guy!! #WadeCountyBack⚡️

As the Cavs changed the landscape with their roster, several other big names had to bid farewell to their franchises as well.

On 30th January, LA Clippers traded the 5 time All star Blake Griffin along with Willie Reed and Brice Johnson to Detroit Pistons who in return sent Avery Bradley, Tobias Harris, Boban Marjanovic, 2018 first round pick and a 2019 second round pick. It marked a shocking turn for the Clippers, leaving only DeAndre Jordan behind out of the CP3-Griffin-Jordan trio they had.

Brice Johnson who was acquired by the Pistons was later traded to Memphis Grizzlies along with a 2022 second round pick in exchange for James Ennis who is expected to fit into the wing position that the Pistons lack.

On 5th February, Chicago Bulls swapped Nikola Mirotic and a 2018 second round pick for Omer Asik, Tony Allen, Jameer Nelson and a 2018 first round pick from New Orleans Pelicans. In the absence of All Star center Demarcus Cousins in the Pelicans line up due to a season ending torn Achilles, Mirotic is expected to provide frontcourt help while spreading the floor through his well-known 3 point shooting prowess.

Jameer Nelson who was acquired by the Bulls was later traded to the Pistons for Willie Reed and a future second round pick.

Milwaukee Bucks who are expected make an enormous impact once the playoffs come, increased their depth in the frontcourt by acquiring Tyler Zeller from Brooklyn Nets who received Rashad Vaughn and a 2018 second round pick. While the Bucks made adjustments necessary for a long run, Nets later traded Vaughn who is a first round pick from the 2015 draft, to Pelicans for Dante Cunningham who would instantly add veteran toughness to the young core that the Nets possess.

Orlando Magic who currently sit one spot above rock bottom in the Eastern Conference took a bold step by trading Elfrid Payton to Phoenix Suns for a 2018 second round pick. Payton who puts up triple doubles every now and then will surely fill the void of the point guard position of the Suns while pairing up perfectly with Devin Booker.

Amidst all the trades, the buyout market just blew wide open as many veterans and skillful players bought out of their contracts in order to move into a team of their own preference. Houston Rockets who grabbed the opportunity with both hands signed Brandon Wright and Joe Johnson to the already stacked up team while Marco Belinelli who’s an immensely capable 3 point shooter committed to Philadelphia 76ers in order to improve their chances of making a playoff run this year.

Weeks before the trade deadline Kemba Walker, DeAndre Jordan and Tyreke Evans were in the spotlight but the talks ended with no success and they still hoop for the same franchise. None of the trades were worthy enough to trade the aforementioned players.

Most of the players have already made their debuts with the new franchises in new threads and it’ll indeed be an eye opener to see how the moves will unravel.

So that’s a wrap for this week! Until next week, keep balling!