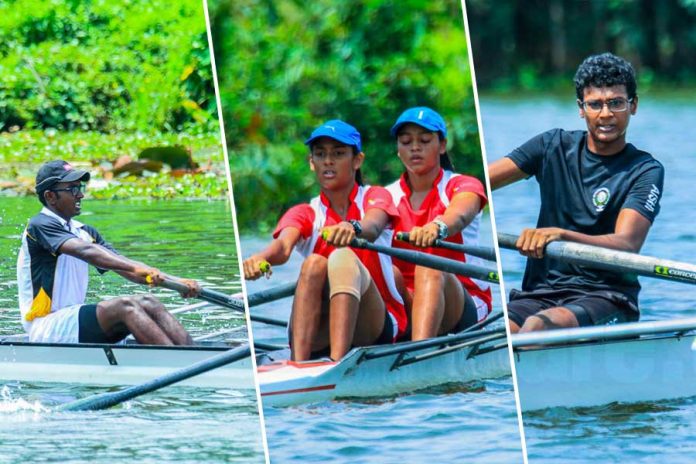 The fourth and final day of the Sri Lanka National Intermediate and Junior Rowing Championships took place on Saturday at the Diyawanna Rowing Centre. Ladies College and S. Thomas’ College dominated most of the events in the Junior category while Navy Men and Women dominated in the Intermediate championship.

The Intermediate rowing championships featured University of Moratuwa, University of Colombo, Navy, Army and Air Force. Navy men and women dominated almost all events as the armed forces of the sea blazed the waters of Diyawanna with ease. They won the Men’s and Women’s quad double and scull events. The Women’s 4+ event was won by University of Colombo and the Men’s 4+ was won by Air force. Navy women won the overall champion while the men’s championship was a joint win by Navy and Army.

This event was organised by the ARASL and the Intermediate Championships was under international standards by FISA where the distance is 2km. The closing ceremony was held at 4.30 and almost all time had achieved something, especially in the Junior category.

Another day at the races and the heat is on! The final of the Boys’ Under-14 Single Scull was won in a thrilling finish by the Ananda College A Scull, who came in just ahead of the B Scull. The Girls’ Intermediate Single Scull Final was won by the Sri Lanka Navy B Scull, who reached the finish just ahead of the Air Force contender and her crewmates in the Navy’s A and C Sculls.

The Boys’ Under-18 Single Scull Repechages concluded with the SJC A Scull and the Gateway College Scull making it to the finals, which will be held tomorrow.

The day’s races were concluded with the Boys’ Under-18 Coxed Four Finals, which were comfortably won by S. Thomas’ College. The Josephians who gave them a good run for their money came in more than a boat length behind.

Day Three of the National Intermediate and Junior Championships saw most of the Boys’ Junior Category races run off. The remaining Finals will be worked off tomorrow, the last day of the Regatta

The second day of the Sri Lanka National Intermediate and Junior Championships began with the heats for the Junior age categories. The school crews took to the water and Ladies’ College, as the defending Junior Champions put on a good show, winning many of their events in the Under-16 and Under-18 categories.

The Under-18s worked off the preliminary rounds of the Coxed Four and Quadruple Scull races, again with the LC-ites winning, in a bid to retain the title for yet another year. The rest of the morning’s events were Single and Double Sculls, with the Girls’ Under-14 Single Scull Semifinals happening.

The Boys’ Intermediate Double Scull repechage turned into a reenactment of the age-old inter-university conflict, with the Universities of Moratuwa and Colombo soon leaving the Peterites behind. UoM won by a boat-length, which means that both universities will race in the semifinals.

The day went off without a hitch and one hopes that the remaining two days of the Championships would continue in the same manner. The stage has now been set for most of the semi-finals and finals and for the majority of events there are no obvious favourites. It remains to be seen who will pull forward and claim the Championships this year.