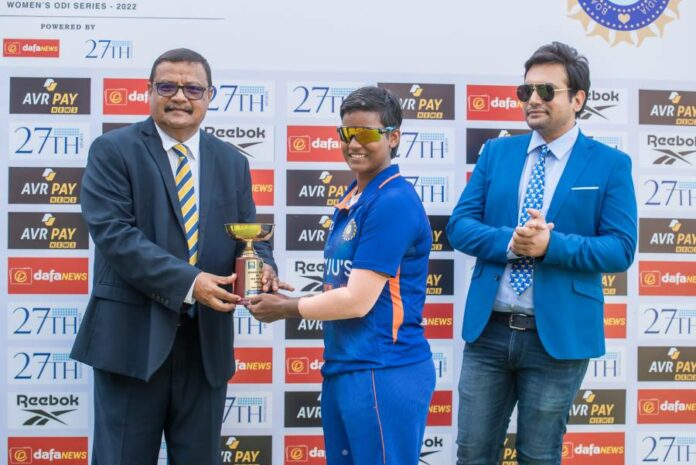 Deepthi Sharma shone with bat and ball to ensure India took a 1-0 lead in the 3-match series against Sri Lanka at the Pallekelle International Cricket Stadium.

Chasing 172 to won, India were almost immediately put on the backfoot, when Oshadhi Ranasinghe sent both Smriti Mandhana and Yastika Bhatia back to the pavilion by the end of the 4th over.

Skipper Harmanpreet Kaur and Shafali Verma built a 44-run partnership to put the visitors back on track before the latter was dismissed playing a loose shot. Verma had looked impressive during her stay at the crease and will be disappointed with her dismissal to Inoka Ranaweera.

Kaur was cautious, leading a ‘new-look’ India batting order, which was missing talisman Mithali Raj, who retired from the game just prior to the series.

Harleen Deol was impressive at No. 5 and looked one of the most fluent batters on a track which looked tough to get settled on. She partnered with Kaur for another 62 runs but just when it was looking like it would be plain sailing for the visitors, Ranaweera picked up Kaur, Deol and Richa Ghosh in quick succession to cause a bit of a hiccup.

Having reduced India to 138/6, Sri Lanka were in with an outside chance, but Athapaththu inexplicably took Ranasinghe out of the attack and with Ranweera done with her overs, opted for the relatively inexperienced Kavisha Dilhari and debutant Rashmi de Silva.

Neither looked threatening against the experience Sharma and Pooja Vastrakar as the pair took India home with 12 overs to spare, the latter finishing the game off with a 6.

Earlier in the day, Sri Lanka won the toss and opted to have a bat on what looked like a slow track.

Renuka Thakur took the all-important wicket of Athapaththu, but Hasini Perera led the charge for the hosts, playing some brilliant shots on the offside.

The inability to rotate strike continued to haunt the hosts, as they struggled to get the run-rate above that 4-runs an over mark. Nilakshi de Silva looked busy in the middle but received little support in the latter half of the innings as Sri Lanka were bowled out with more than an over to spare.

Thakur registered career-best figures and was impressive with both the new and old ball, but it was Sharma who shone again with the ball, picking up 3/25 to close things out.

With the win, India take a 1-0 lead in the series and also get on the board in the ICC Women’s Championship with 2 points.

The 2nd ODI will be played at the same venue on the 4th of July from 10am (local time) onwards.