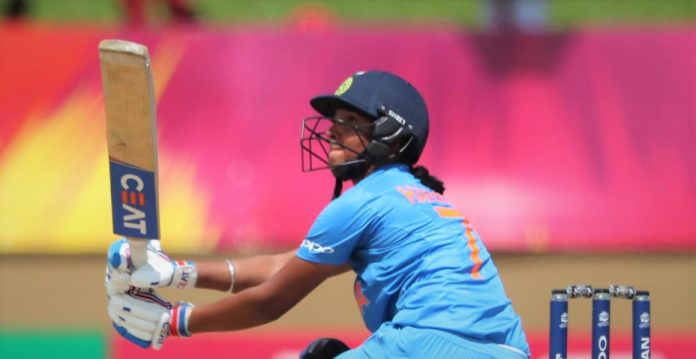 Harmanpreet Kaur, the India captain, struck her maiden Twenty20 International century and the first by an Indian woman as her team began their ICC Women’s World T20 2018 campaign with a 34-run win against New Zealand.

Kaur was struggling with cramps, but battled through the pain, the heat and the nerves of an opening match to post the highest individual score at the World T20 and lift India to a winning 194/5 at the Guyana National Stadium on Friday, 9 November.

Having won the toss, India chose to bat, with Taniya Bhatia opening with Smriti Mandhana as they attempted to get a flying start.

India were tested with some fiery pace bowling from Lea Tahuhu and quickly lost three wickets in the Powerplay. That included the wicket of Mandhana to a blinder from Hayley Jensen at the ropes.

Kaur then combined with Jemimah Rodrigues, to steady the innings. The skipper took her time to get in, and leaned on her younger partner while she got used to the conditions. But once the switch flicked, it rained boundaries.

The duo went on to add 134 off 76 balls, which is India’s best partnership in all T20Is. Rodrigues fell for 59 off 45 balls, with seven fours, but Kaur had enough time to bring up her hundred.

She brought up the milestone with a couple of runs behind square. She finally fell for 103 off 51 balls; the knock included eight sixes, with one of them soaring into the stands.

New Zealand came out swinging in chase of a target of 195. Suzie Bates especially looked in ominous touch and kept her side ahead of the par score. They had added 52 in 6.2 overs when debutant Dayalan Hemalatha got the breakthrough, and Poonam Yadav further turned the screw with the wicket of the dangerous Sophie Devine.

The Indian spinners kept at it, with Yadav’s leg-spin and Hemalatha’s off-spin chipping away at the line-up. Katey Martin and Leigh Kasperek played cameos, but none of the White Ferns could kick on for the big innings that this chase needed, and they could get no further than 160/9.