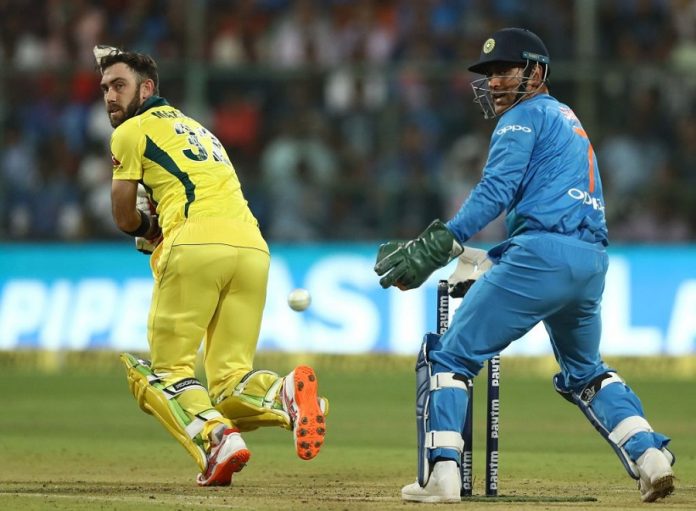 A brilliant Glenn Maxwell hundred helped Australia chase down 191 to seal the two-match series 2-0 in Bengaluru.

After a nail-biting last wicket win in the first T20I, Australia won the toss and elected to field. The tourists made a decent start to proceedings, restricting India’s opening pair to just four runs from the opening two overs.

Shikhar Dhawan struggled to get into his groove, only scoring one boundary in his 24-ball innings whilst his partner KL Rahul played the role of the aggressor at the other end. Towards the end of the Powerplay, Rahul hit Jhye Richardson and Pat Cummins for four sixes in just six balls, the highlight of a which was a casual flick off his toes over the mid-wicket boundary off the bowling of Cummins.

The pair departed soon after the end of the Powerplay, Rahul ramping Coulter-Nile straight to third man while Dhawan was superbly caught by Marcus Stoinis running in to take a diving catch from the boundary. After closely examining several replays, the TV umpire eventually adjudicated that the catch was taken cleanly.

Rishabh Pant departed the following over to bring MS Dhoni to the crease to join his captain, Virat Kohli. Initially, the iconic duo were content rotating the strike in the knowledge that they were capable of accelerating later in their innings. On 115/3 after 15 overs, Australia would have harboured hopes of restricting India to a sub-160 total. But, the acceleration from Kohli and Dhoni came in some style and quickly dispelled such ambitions.

Both began to clear the boundary with some regularity and although Dhoni fell in the last over, his 23-ball 40 and Kohli’s 38-ball unbeaten 72 took India to an imposing score of 190/4.

India started the defence of their total well. Siddarth Kaul bowled Stoinis for seven an over before Vijay Shankar dismissed Aaron Finch for eight. Australia were 22/2 after four overs, already requiring more than 10.50 runs an over. Enter, Glenn Maxwell. Fresh off a good end to his Big Bash League campaign and 56 in the first T20I of the series, Maxwell took off from where he continued, pulling Jasprit Bumrah for six in his first over at the crease.

That set the tone for an innings of brutal hitting. Ably supported by D’Arcy Short (40 off 28), Maxwell had given Australia cause for optimism after looking well out of the game earlier in the chase. Peter Handscomb joined Maxwell and his plan was clear from the outset – give Maxwell the strike.

All smiles after a couple of cracking T20s. Bring on the ODIs starting Saturday! #INDvAUS pic.twitter.com/CxdKnByz3s

As well as Maxwell was striking the ball, Yuzvendra Chahal and Krunal Pandya managed to temporarily contain him well. The 13th, 14thand 15thovers went for a combined 23 runs – excellent in the circumstances. At that stage, Australia needed 60 off the final five overs. A tough ask, but not an impossible one.

Then came the Maxwell onslaught. Australia subsequently hit 46 runs from the next three overs, most of them off Maxwell’s blade. Suddenly, they needed just 14 from the last two overs and despite a typically economical penultimate over from Bumrah that went for just five, Maxwell took them over the line with two balls to spare. He ended on 113 not out, a simply sensational display of power hitting. Handscomb ended on just 20 off 18 balls, but his presence of mind complemented Maxwell’s ball-striking to perfection.