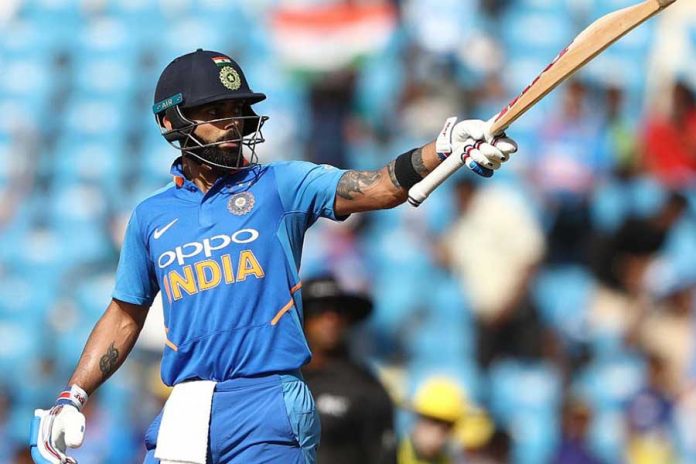 A century from Virat Kohli, alongside some strong bowling from India at the death, helped settle a pulsating one-day international in Nagpur.

Australia, led by Marcus Stoinis’ half-century, threatened to level the series in a game that endured plenty of twists and turns. It all came down to the last over, bowled by Vijay Shankar.

The 28-year-old responded to the pressure placed on him in style, dismissing Stoinis with his first ball – also his first ODI wicket – before castling Adam Zampa to seal an eight-run victory, and give India a 2-0 lead in the series.

What a game in Nagpur!

India edge to victory by eight runs, with Australia bowled out for 242. Marcus Stoinis (52) threatened to take the game away from the home side, but some strong bowling at the death sees India go 2-0 up. #INDvAUS SCORECARD ➡️ https://t.co/pNkv2db4Mg pic.twitter.com/236W0cyXDK

As is the case usually, Kohli was the leading man for India with the bat, becoming the second man to scale the ascent of 40 ODI tons. Kohli’s knock of 116 was the centrepiece of India’s innings, with only Shankar (46) offering anything else of real substance. The pair put on the innings’ most productive partnership, joining forces with India 75/4 after 17 overs.

Shankar, whose last ODI innings saw him hit 45, went one run further here, getting himself to 46 in quick time before his stay at the crease ended in the most unfortunate fashion. A straight drive from his skipper saw the ball crash into the stumps at the non-striker’s end, with a deflection from Adam Zampa ensuring that a maiden ODI half-century would have to wait for another day.

Zampa’s wickets of Kedhar Jadhav and MS Dhoni – both of whom had been thorns in Australia’s side in the first ODI – saw to further damage for the Indians, and a four-for for Pat Cummins saw India bowled out for 250 with 10 balls left to play.

Aaron Finch and Usman Khawaja laid the foundations for Australia’s run chase, putting on 83 for the opening wicket before both batsmen departed in the space of six balls.

While Shaun Marsh (16) and Glenn Maxwell (4) perished to the spin-pair of Kuldeep Yadav and Ravindra Jadeja, Peter Handscomb and Stoinis’ fifth-wicket partnership looked to be taking the game away from India.

Jadeja intervened, however, stunning Handscomb with a bullet throw from back point to send the batsman on his way, two runs short of a half-century. Australia continued to battle, with Stoinis finding a more than able partner in Alex Carey (22). Another twist in the tale came in the form a wicket from Kuldeep, and a double-wicket burst from Jasprit Bumrah put India back in control.

The game remained on the line till the very end, but Shankar’s final over heroics ended any hopes of Australia securing a series-levelling victory.