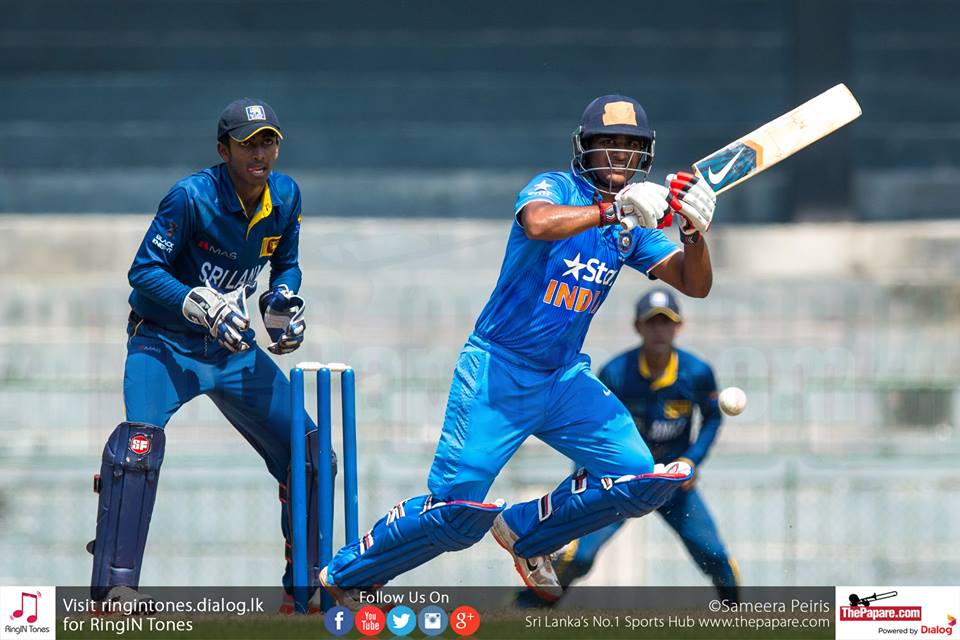 Virat Singh and Washington Sundar stroked valuable half-centuries as India under 19s defeated Sri Lanka under 19s by 4 wickets in their U19 Tri-Nation match which was played at R. Premadasa International Stadium on Thursday.

The unbeaten Indian team overcame a stiff target to keep their unbeaten tag intact and finish the round-robin stage with 4 wins out of 4.

After being sent into bat first, Kavin Bandara who came in place of Salinda Ushan opened the batting with Avishka Fernando for the Lion Cubs. The right-handed Fernando failed to impress as he was dismissed for only 9 by opening bowler Khaleel Ahmed.

Skipper Charith Asalanka added 47 with Bandara for the 2nd wicket before the former fell to the bowling of Washington Sundar. The left-handed Richmondite made 22 off 36 balls with 4 fours. Vice-captain Sammu Ashan was undone by Rahul Batham in the very next over as the hosts’ were restricted to 75 for 3 in the 18th over.

Left-handed Bandara from D.S Senanayake College batted with excellent authority to stir up a superb 91-run stand for the 4th wicket along with Kamindu Mendis. Seamer Ahmed struck once again when he clean bowled Bandara for a well-constructed 74 off 116 balls.

None of the lower-order batsman made a significant contribution to the score apart of Mendis who slammed 65 from 93 deliveries. Sri Lanka U19s ended their allotted 50 overs when the giant scoreboard read 221. Left-arm seamer Khaleel Ahmed was the pick of the bowlers taking 4 scalps for 55.

Chasing a testing target of 222, Indians lost Himanshu Rana in the second over as Trinitian Lahiru Kumara struck early. Left-handed Ishan Kishan was the next to fall as Kumara hit the stumps as the visitors were 37 for 2 in 8 overs.

In-form Washington Sundar and Anmolpreet Singh shared a 55-run stand for the 3rd wicket before the latter was run-out courtesy some excellent fielding by the Lankans. Sundar’s astonishing innings of 61 was also halted by another stunning piece of fielding by the home team.

Half of the side was back in the pavilion with just over 100 runs to get but Virat Singh and Mahipal Lomror guided the strong Indian side to victory. Singh remained unbeaten on 60 to tarnish Sri Lankan hopes.

The all-important final round-robin match between Sri Lanka U19s vs England U19s will be played on 18th December at the same venue to decide the other finalist who will meet India U19s on 21st December.