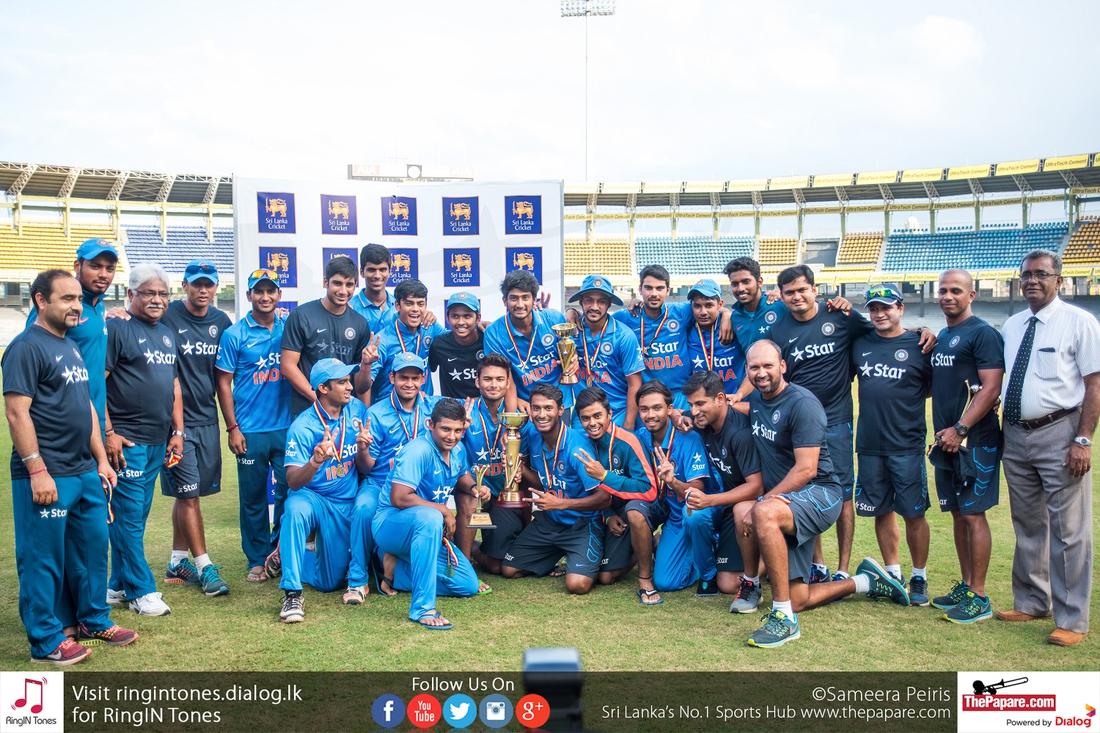 The young Indian U19 fast-bowling unit and their top-order batsmen helped them clinch the under 19 Triangular trophy beating Sri Lanka under 19s by 5 wickets in the final worked out at R. Premadasa International Stadium on Monday.

Left-arm seamer Khaleel Ahmed picked up both Captain, Charith Asalanka and Vice-captain Sammu Ashan for 0 and 1 respectively as the home team were in deep trouble at 23 for 4 after being 17 for no loss.

Richmondite duo of Kamindu Mendis and Wanindu Hasaranga tried to resurrect the innings but they were only able to contribute 18 and 11 respectively as the left-arm spinner Mayank Dagar came into play. Josephian all-rounder Jehan Daniel playing his first match of the tournament due to O/L examinations mustered only 6 runs as Sri Lanka were in dire straits at 81 for 7 in 29 overs.

Isipathanian wicket-keeper batsman Vishad Randika and Maliyadeva College spinner Damitha Silva batted sensibly and shared 61 runs for the 8th wicket to give some hope to the Islanders. Right-handed Vishad played a gem of an innings when he made 58 off 75 balls with 8 fours while Silva stroked 2 boundaries during his 47-ball 23.

The visitors finished off the Lankan tail cheaply as the hosts’ posted a below-par 158 runs on the board. Seamers, Avesh, Khaleel and Shubham Mavi shared 7 wickets amongst them.

Chasing 159 runs to win, the Indian openers, Washington Sundar and Rishabh Pant got them off to a blazing start by adding 89 runs in 16 overs before the latter fell to the off-spin of Charith Asalanka. He made an enterprising 39-ball 35 with 5 fours and a six.

Sundar stroked his 3rd half-century of the tournament when he made 56 off 77 balls including 6 fours. Spinner Damitha Silva was introduced into the attack and he triggered a minor collapse by taking 3 wickets including Sundar, dangerous Sarfraz Khan and Ishan Kishan but experienced Ricky Bhui got them off over the victory line safely with an unbeaten 29.

The home team will rue their dismal batting performance for the loss as this was the 4th consecutive defeat at the hands of the touring Indians including the tour game. England under 19s was the other participant nation which failed to win single game.