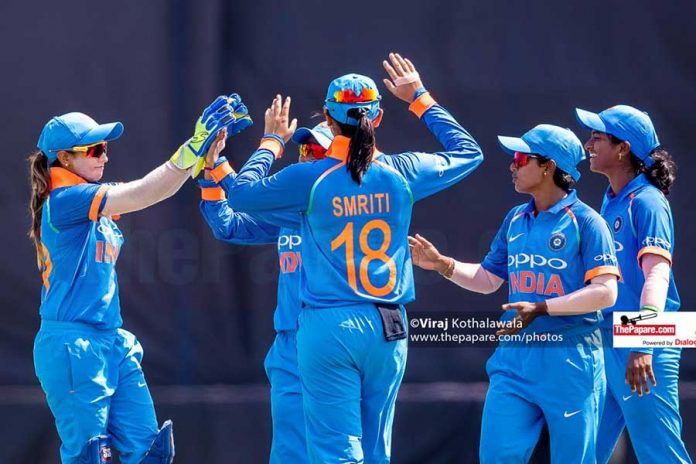 The 1st T20 between the India Women’s team and the Sri Lankan Women’s team was played today (19th), with India claiming a hard fought victory by 15 runs at the MCG in Katunayake.

The hosts won the toss and elected to field first. Indian opener Smriti Mandhana was dismissed in the very first over by Udeshika Probodhini to give Sri Lanka an early advantage. First drop bat Jemimah Rodrigues, and the experienced Mithali Raj got together and consolidated the innings for the visitors putting them back in control.

Rodrigues hit an explosive cameo of 36 runs off just 15 balls, which helped the visitors to take the upper hand. The Lankans managed to tighten the screws somewhat by dismissing both Rodrigues and Mithali Raj. But another brisk partnership between Taniya Bhatia and Anuja Patil propelled the Indians to a formidable total of 168 runs. Apart from Chamari Atapattu and Prabodhini, the rest of the Sri Lankan bowlers struggled to control the run flow which helped the visitors to score freely.

In reply, the hosts started off with a blistering knock by Yasodha Mendis. She scored 32 runs off just 13 balls with 2 sixes and 5 fours. Skipper Atapattu also got off to a good start, but her dismissal gave the edge back to the Indians.

Sri Lanka needed 92 runs in the last 12 over’s, with 6 wickets in hand. Middle order batter Eshani Loksuriyage kept the Lankans in the game, but she did not get much support from the other end. She ended up with a top score of 45 runs which came off just 31 balls. Poonam Yadav was the chief destroyer for India with the ball. She took four wickets, including the big fish of the Lankan batting line up. The 2nd T20 will be played on Friday the 21st in Colombo, with India leading 1-0 in the five match series.