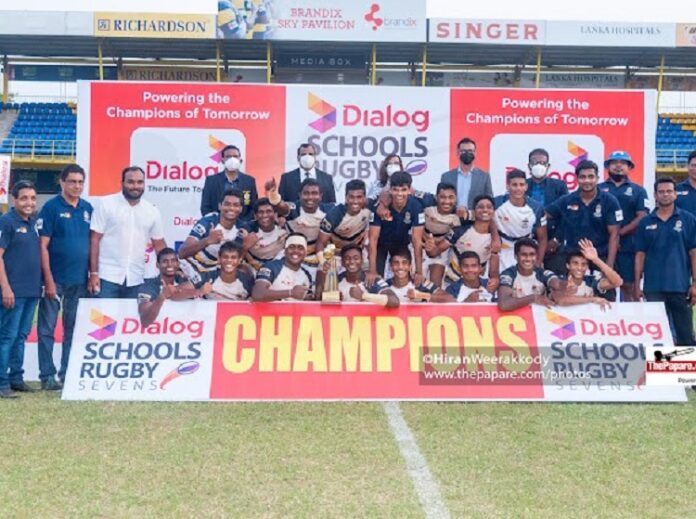 St.Peter’s laid down a daunting marker in the Dialog Schools Rugby 7s Western provincial competition as they stormed to 7s title by defeating S.Thomas’ college 19-17 in the opening competition held at Royal Complex.

12 teams participated in segment one of the western province tournament and the day commenced with the initial group level games.

Hat trick of tries from Avishka Gunawardene helped Royal College to start their campaign with a thumping victory over Ananda College 33-00.

Zahira College won the Maradana derby 35-00 against Ananda and set up a group deciding encounter with Royal.

Royal was far superior to Zahira as they went past them with a comfortable win as the score stood 31-00.

Wesley College and S.Thomas’ College won their respective games against Thurstan College with ease by scoring 28-00 and 31-00.

In the group deciding game, S. Thomas’ dashed out some exciting rugby as they trounce the Double blues 29-00.

The surprise package of the tournament DS Senanayake College made two big upsets by defeating the giants St. Joseph’s and Isipathana 07-05 and 17-12 respectively to secure a spot in the cup semifinal.

While St. Joseph’s humbled the struggling green machines 22-14 as they entered the Bowl semifinal and Isipathana had to settle for the Shield Final.

St.Peter’s and Science fought out for the top spot as they received walkovers from Prince Of Wales College. The Bamba brigade was too much for the boys from Mount as they were humbled 24-00.

Shield Semifinals – Thurstan and Isipathana meet up in the shield final

Thurstan College managed to fend off Ananda College 38-05 as they set up a big game against their archrivals Isipathana as the green machines were awarded a walkover.

Bowl Semifinals – Wesley and Science to battle out for the bowl

Wesley College came back strongly after the defeat against S.Thomas’ as they got the better out of Zahira College 26-05. In the second semifinal, Joes lost to Science College after a thrilling game that ended 17-12.

Archrivals Royal and S.Thomas’ faced off in the first semifinal. Thomians went into an early lead as O.A. Hettiarachchi scored a brace. Thomians continued their dominance as they ended the first half with another try as they lead 21-00. Thomians defense held up until the 10th minute as Royal managed to score back to back tries but it was enough for the home side as they lost the game 21-12.

In the second semifinal, St.Peter’s managed to survive a late scare as they took a 19-00 lead but lackluster performance in the last five minutes brought DS back to the game as they scored two tries in quick succession. DS had the opportunity to score a winner but a handling error by the Dons prevented another upset as St.Peter’s went into the final by winning the game 19-14.

Finally, the green machine started to function as they trashed their brothers 36-00 and took home the shield concluding a disappointing sevens competition.

Wesley opened the game with a superlative team move as they turned defense into attack and they took a 7-0 lead. Wesley managed to score two tries in the second half which sealed the bowl for them and science scored a consolation try but that wasn’t enough as Wesley took home the Bowl 19-07.

DS started the plate final on a high note as they scored two tries as they pounced on the mistakes which Royal made and took an early 14-00 lead.DS continued their superlative form as they went over for another try at the beginning of the second half. Royal managed to reduce the deficit by scoring a try just before the final whistle as DS made another stunning victory to clinch the plate 21-05.

Thomians drew first blood through their nippy scrum-half, N.S.S Perera, as he dummied the Peterite defense and went over for a 5-0 lead. Peterite defense made another blunder as they could collect the high handing ball as the tall lanky centre O.A Hettiarachchi collected the loose ball and scored under the post.

Peterites made comeback to the game and score two quick tries just before the break as Kushan Tharindu and T. Ranasinghe went past the white line to snatch the lead.

The tense second half began as the Peterite skipper Ishan Fernando ran around the Thomian defense from their half touch to score an important try. Both teams made a few handling errors in the latter part of the game as Thomians scored in the dying stages of the game and they couldn’t convert it as the Peterites were crowned cup champions.

Player of the tournament – Mahith Perera of S.Thomas’ College