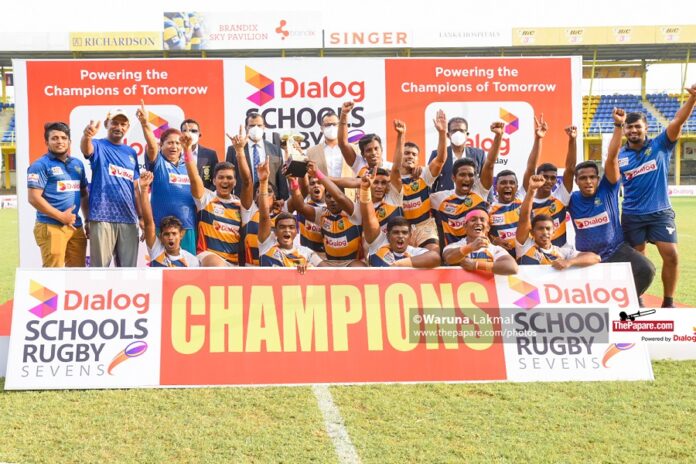 Schools Rugby made its return after an extended break enforced by the pandemic, as the Sri Lanka School’s Rugby Football Association (SLSRFA) commenced their Inaugural School’s Rugby Tournament with the Segment B of the Western provincial competition, at Royal complex today (18th).

The day’s proceedings were kicked off with Mahanama College comprehensively defeating CWW Kannangara College, while Sumangala College Panadura got the better of Piyarathana College in a one-sided affair. Piliyandala Central College was awarded a walkover over Nalanda College, and St. Benedict’s eased past St. John’s in the opening set of games.

The tournament moved towards it business end as the Bowl semifinals commenced with Mahanama College massacring Kannangara College with five unanswered tries to seal a spot in the Bowl final with St. John’s, as they received a walkover for their game against Nalanda College.

The cup semifinals displayed some exciting games as Carey College won a close tussle against Moratu Vidyalya, while Piliyandala Central College won a nail-biter in the last move against St. Benedict’s College.

St John’s College opened up scoring with quick try and managed dominate the first half until Mahanama College burst through the St. John’s defense line to score a try in the final move of the first half, to take a two point lead at the break.

Mahanama College had the perfect start to the second half as they went over for their second try. Mahanama College were one man down, but it did not matter as they scored a fabulous counter-attacking try to secure the Bowl by 21 points to 05.

St. Benedict’s drew first blood in this final as they took the maximum out of the numerical advantage they had to go in to an early lead. The Bens continued their dominance as they went over for the second try on the dying stage of the first half.

Bens continued their dominance in the second half as they scored three more tries to secure the plate, as they won the game 29 points to nil.

Piliyandala Central College had a perfect start to the final as they went over in the first minute of the game, where they showcased some smooth hands to take a 5 point-lead. The boys from Pilyandala continued to show their dominance as they went from their own 22 meter red zone to sprint past the Carey College defense to increase their lead, and they managed score another try on the brink of half time to extend their lead.

Carey College began the second half on a positive note as they managed to open their account, going over to cut the deficit down to 12 points, but the killing blow for Carey came on the 12th minute as a quick counter-attacking try by the boys of Piliyandala clinched the game. Carey College scored a consolation try but that was not enough as Piliyandala Central College ensured that they clinched the Western Province Segment B competition.

Player of the tournament – Ishan Tharindu of Piliyandala Central College

Sri Lanka’s #1 Sports Hub, ThePapare.com will be bringing you the live action of Dialog Schools Rugby 7s Western Province segment A tomorrow from 08.50 am onwards.