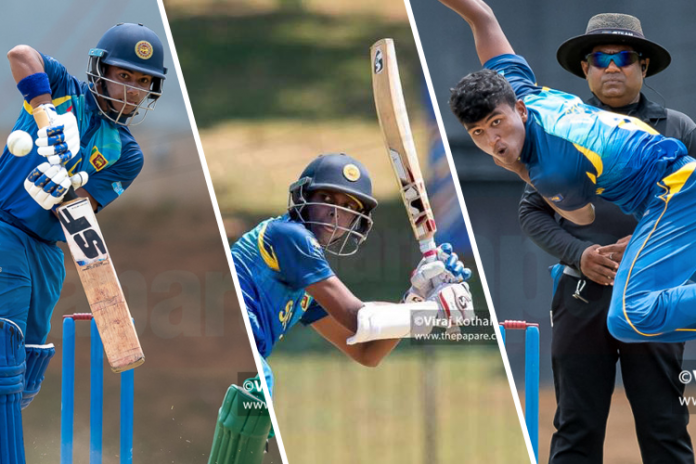 The Sri Lanka U19 skipper Nipun Dhananjaya (St. Joseph Vaz College) won the toss and had no hesitation to bat first, as they were very confident of defending the targets with their bowling lineup. The left-handed duo Kamil Mishara (Royal College) and Navod Paranavithana (Mahinda College) opened the innings for Sri Lanka, but could not provide a solid start as both of them were dismissed by left-arm seamer Tahir Hussain within the first 9 overs.

At 36 for 2, the right-handed batsmen Mohamed Shamaz (Zahira College) and Thaveesha Abhishek (Richmond College) met at the crease and built a 33-run partnership for the third wicket. However, both Shamaz (19) and Abhishek (13) were dismissed by the 17-year old left-arm spinner Aamir Ali by the 19th over.

When Sri Lanka was reeling at 71 for 4, the skipper Nipun Dhananjaya and all-rounder Sonal Dinusha (Mahanama College) joined at the middle and rescued the innings, building a 122-run partnership for the fifth wicket. However, Sri Lankan innings fell apart and bowed out for 215 runs in 49.3 overs after their dismissal.

Left-hander Sonal Dinusha became the top scorer for Sri Lanka as he made 68 runs off 87 balls including 7 fours. The skipper Dhananjaya stroked 55 runs off 88 balls with a four and 2 sixes. The left-arm seamer Tahir Hussain was the pick of the bowlers for Pakistan as he picked up 4 scalps for 41 runs. In addition to this, Mohammad Amir Khan, Abbas Afridi and Aamir Ali took 2 wickets each for Pakistan.

In reply, Pakistan opening batsmen Haider Ali and Muhammad Shehzad got off to a good start, putting 61 runs on the board in 10.4 overs. However, the left-arm seamer Dilshan Madushanka (Wijayaba National School Hungama) struck thrice in three overs to dismiss both the openers, with the number three batsman Rohail Nazir putting pressure on the Pakistan middle order.

However, the middle order batsmen Fahad Munir and Mohammad Haris recovered the innings nicely, adding 65 runs for the fourth wicket. Mohammad Haris ran himself out after scoring quick 43 runs off 36 balls with 5 fours. Fahad Munir (51) and Qasim Akram (29) then built another crucial 49-run partnership for the fifth wicket before the former retired out, letting the other batsmen get accustomed to the South African conditions.

The Pakistan U19s chased down the target in 45.2 overs with 4 wickets remaining. The left-arm seamer Dilshan Madushanka was the pick of the bowlers for the Sri Lanka U19s as he grabbed 3 scalps for 21 runs.

The Sri Lankan U19 team will play their first match of the ICC U19 World Cup against India on the 19th of January at Mangaung Oval, Bloemfontein. Keep logged on to ThePapare.com for all the live updates, scorecards, match reports and information on this tournament.

Pakistan U19 won by 4 wickets