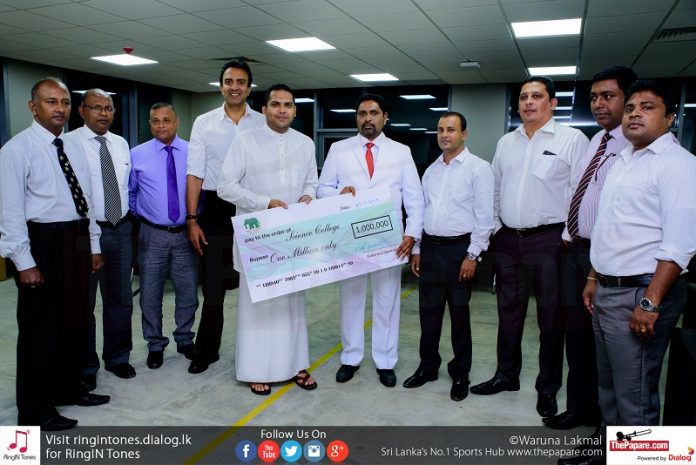 Hon. Minister of Telecommunication & Digital Infrastructure Harin Fernando handed over the amount collected from the jersey auction at the Sri Lanka Super 7’s that was held this year to the Principal of Science College Mount Lavinia ahead of the upcoming schools’ rugby season.

The Sri Lanka Super 7’s series that was inaugurated last year initiated to a move to accumulate funds for a notable cause of the sport. In 2016, during the first ever series, an autographed All Blacks jersey was auctioned in a bid to fund a new stadium for Isipathana College.

This time around an exclusive signed jersey of the Hurricanes Super Rugby team who emerged champions in 2016 was put out for auction during the series in aid of Science College’s rugby development.

Speaking to ThePapare earlier this year at the launch of the 2017 edition of the Sri Lanka Super 7’s, Minister Harin Fernando added these words on the initiative.

“Last year I had a jersey and we auctioned it. We collected the funds and handed it to Isipathana College. Even this time, thanks to Inthi Marikar, he was able to use his contacts in New Zealand and has been able to get his hands on a Super Rugby champion team, the Hurricanes jersey, got it signed and endorsed”

“This time around as well, we are going to do the same, auction the jersey, make some money and give it to this school that has done so well in rugby over the past. This tournament isn’t just about the rugby but about promoting rugby in schools”

The effort that was spearheaded by Hon. Harin Fernando saw the champion Hurricanes jersey fetching a sum of rupees 1 million. The proceedings were handed over in an official ceremony to the principal and the members of the Science College Rugby Development Group yesterday in the presence of the minister himself.

In addition to the monetary donation, Sri Lanka Rugby handed over rugby boots for the benefit of the players who would be taking up the sport in Science College.

Science College rose to popularity in the schools’ rugby arena since 2011 and was a key player in the top tier league till last year. The year 2015 was the school’s most glorious year as they won the Milo Presidents’ trophy under the leadership of Lasindu Ishan, defeating Isipathana College in the finals.

After surviving seven years in the Singer Schools Rugby Division ‘A’, Science College has been shown the door as they…

This year’s season was a disappointment for Science where they faced relegation to division ‘B’ after surviving seven long years in the main draw. The contribution that was made will no doubt empower the spirit of the sport and see the standard of the sport re-instated to its original level in the school.