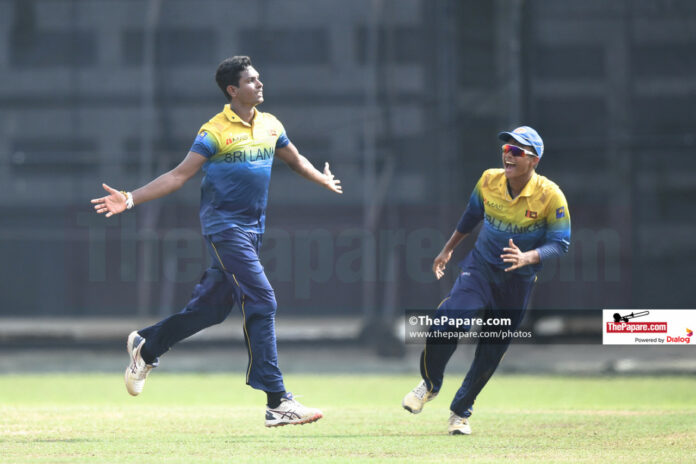 When it comes to identifying talents, there’s no better person in the sport than Tom Moody. The former Australian all-rounder, during his stint as Sri Lanka’s Head Coach, had a knack of picking players who did not really have much of a reputation.

The other good thing about Moody was that once a talent had been identified, he was given the full backing. Promising speedster Matheesha Pathirana can be proud that he has got the backing of Moody, a two-time World Cup winner under Allan Border and Steve Waugh.

Moody will be mentoring Pathirana in his capacity as Director of Cricket of the Desert Vipers during the ICC-sanctioned ILT20 tournament to be held in the UAE next year.

“We see him (Pathirana) as an impact bowler. He will be someone who will be taking on the pressure situations, like impact bowlers do, and is brought on to take wickets, whether it be in the power play overs or closing the innings and defending x amount of runs in the last couple of overs. That is really the thing that attracted us to him,” explained Moody.

Pathirana, who turns 20 next week, first made an impression with his slingy action during the ICC Under-19 World Cup earlier this year and since then he has earned a few franchise stints including at the IPL where he is part of Chennai Super Kings team.

“He is unique. We have seen glimpses of him when he played for CSK in the IPL. A lot of people were surprised that someone so young was given the backing and the opportunity there. I have also seen him around the Sri Lankan system, since he represented them in the Under-19 (World Cup) in the Caribbean. He is a bit in the Lasith Malinga mould, and he is a genuine slinger, brought up with soft ball cricket, and brings a unique action to the table, because of that background,” added Moody.

“We felt that it was important to try to have something that was a little bit different. We have left arm options in our fast-bowling cartel, but we did not have someone that has that slinging action,” Moody said explaining the franchise’s decision to hire Pathirana.

A lot of people have tried to emulate Malinga but not many have been able to generate the pace or bounce of Malinga that unsettled many batsmen. Matheesha has been able to match Lasith’s pace and bounce although he needs to do lot of work on control, bowling under pressure and so on.

“We watched and imbibed the career of Lasith Malinga over the years, and he was always so intriguing to watch bowl. I think the pace (of both Malinga and now Pathirana) just comes from that upper body power and the slinging motion of that action. Bounce? I wish I could answer how he does generate that type of bounce because you would naturally think that the ball would just skid through on to the top of the stumps, but he has obviously got that ball that he can get up and challenge the batter at the right time.”

Moody was also impressed with Matheesha’s wider skill set. “For his age, his skills are quite advanced, which comes as no surprise to me because, we see in the subcontinent, particularly in Sri Lanka, not just with bat but also with ball, that uniqueness in Sri Lankan cricketers. They have got that X factor, and you do not have to look back too far in history to see people like Muttiah Muralitharan, and Malinga, who have unique styles. What is beautiful about what they bring to the table is that it has not been influenced or changed, just because it is not the norm. It has not been disturbed going through the coaching system, it has been embraced. Having those skills, and being able to adapt and evolve his game at such an early age is exciting for him, because where is the ceiling? If he is doing what he is doing with his bowling now, that ceiling is extremely high.”

The Desert Vipers is one of the six franchises in the tournament and the team is owned by Lancer Capital. Pathirana will play alongside Wanindu Hasaranga, Alex Hales, Colin Munro, Tom Curran and Sheldon Cottrell in the Desert Vipers side and it will be a good learning experience for him.

Pathirana has represented Sri Lanka in one T20 International, but he is expected to feature a lot more next year with the national cricket team.