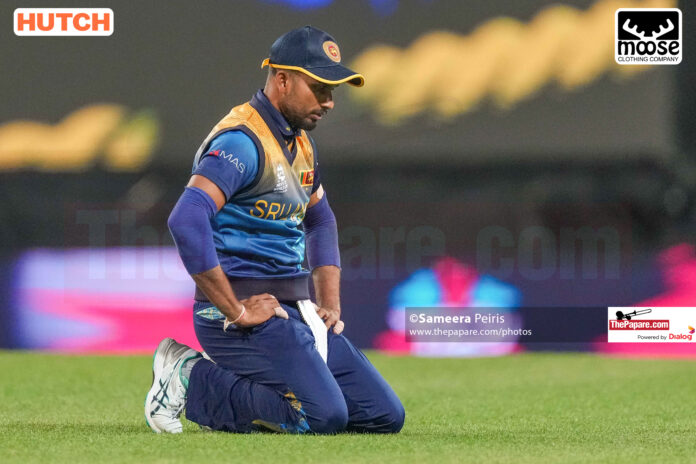 Sri Lanka were knocked out of the ICC T-20 World Cup in Australia with a game to spare.  Heading into Saturday’s game against England in Sydney, the former champions had won four games and lost three with their wins coming over UAE, Netherlands, Ireland and Afghanistan while they went down to Australia, New Zealand and Namibia. The loss in their opening encounter to Namibia was a bitter pill to swallow.

Nevertheless, having played back to back qualifying events, there was some consolation as Sri Lanka gained automatic qualification for the next event to be co-hosted by USA and West Indies. The top four teams of each group would automatically qualify for 2024.

Sri Lanka blew hot and cold in Australia this time around. Even Clive Lloyd’s invincibles of 1970s would have struggled to make an impact with six players injured and four of them ruled out of a tournament. The biggest casualty of them all was Dushmantha Chameera, who had been wrapped up on a cotton wool with one hope, that he would be fit to play the World Cup.

The team management was repeatedly asked as to why they had to put up with so many injuries and an assurance had been given that this will be scientifically looked at when they return to their bases at RPS after the campaign.

The weather in Geelong, where they played the opening round fixtures, rarely hit double digits during night games and that has been pointed out as one reason for frequent injuries. Another factor is said to be the soft soil at the football ground that had been converted into a cricket stadium. But, you wonder why the Dutch, Namibia and even UAE teams didn’t suffer so many injuries?

Some questions, however, will be asked on Binura Fernando. Was his fitness assessed properly before he flew out of Colombo as replacement for Dilshan Madushanka, who tore a quad muscle on the eve of the competition?

You also wonder whether the highly publicized fitness regime that came into effect during the Mickey Arthur days, which effectively shut the door on half a dozen seniors, is still in place or has that been abandoned? Most of the players seem to have come good on the two kilometer run but questions remain on the skin fold tests and it is believed some of them failed it.

Sri Lanka also failed to get key players like Kusal Janith Perera and Avishka Fernando back into the fold after their respective surgeries. Sri Lanka’s top order doesn’t possess the firepower that some of the other teams have and the presence of KJP and Avishka or for that matter even one of them would have solved that problem.

Spinners Wanindu Hasaranga and Maheesh Theekshana shouldered the bowling responsibilities along with quick Lahiru Kumara and Kasun Rajitha, a late replacement rose up to the occasion so well.

The batting duties were well performed by the top four of Pathum Nissanka, Kusal Mendis, Dhananjaya de Silva and Charith Asalanka, who chipped in with match winning contributions or decent ones that enabled the team to post on par totals.

The biggest disappointment was Bhanuka Rajapaksa. After his Asia Cup heroics, the team was banking on him heavily but a high score of 34 before Saturday’s game didn’t help Sri Lanka’s cause. The entire middle order was a flop with Dasun Shanaka top scoring with 35 runs while Wanindu Hasaranga even failed to get into double figures.

Fielding was one discipline that had shown drastic improvements in recent months. That was a key factor as Sri Lanka went onto win the Asia Cup against many odds beating both world’s number one ranked team India and number two ranked team Pakistan, twice. However, during the World Cup, fielding was a big disappointment. Dropped catches and misfields cost the team dearly. Some of those drops were embarrassing and as it had happened time and again, drop catches prove to be costly.

What next for Sri Lanka? The team will be touring India for a T-20 and ODI series after Christmas and when selections are made, team composition has to be done with the next World Cup in mind. There are few exciting talents who have come through the Under-19 circuit like Dunith Wellalage, Ranuda Somaratne and Shevon Daniel and giving some of them exposure at the highest level is not a bad idea with the next World Cup in