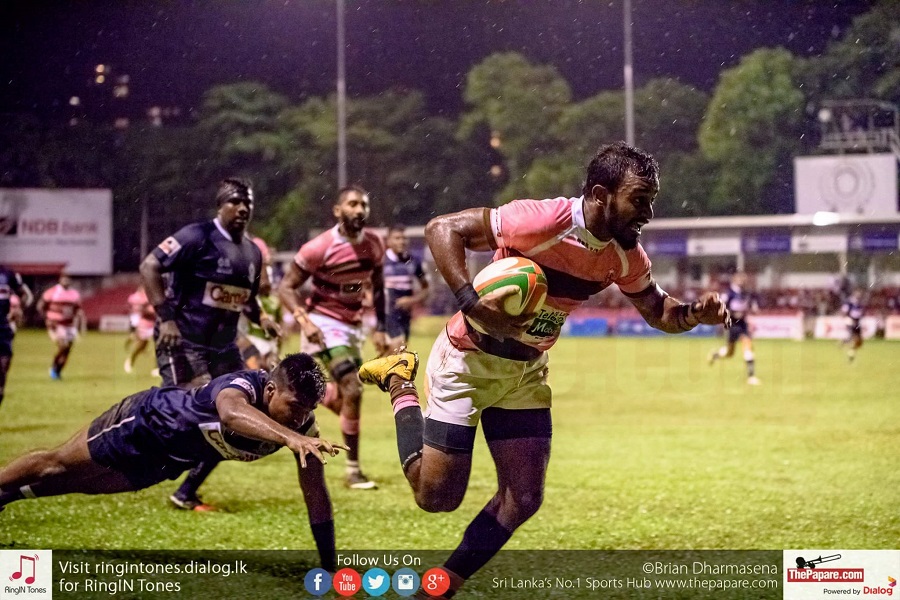 Havelocks Sports Club got their Dialog ‘A’ division league campaign off to a good start securing a rather comfortable 36nil victory over Police Sports club in their season opener worked off at Havelock park. Havies collected their points from 4 Goals, 1 Try and a penalty while restricting their opponents to no score.


The sprinkling showers that persisted throughout the game meant that both teams had to be wary of handling the wet ball and negate the slippery ground conditions. But it was the hosts who got off to the perfect start when Hooker Prasath Madushanka went over the whitewash off a rolling maul inside 2 minutes. Rizah Mubarak who made the switch from Longden Place to the park club got his Havies points tally up and running, slotting over the conversion despite the acute angle. (HSC 07 –POL 00)

The home team, especially their forwards were dominant from the start and five minutes later Prop forward Dushmantha Priyadarshana doubled his teams advantage with classic Prop forwards push over try from close range after his fellow forwards had kept knocking on the door with some close range pick and goes. Mubarak was once again on target with the conversion. (HSC 14 –POL 00)

Despite the early set back Police did have a rare chance of getting themselves into the score sheet but Fly half Sandesh Jayawickrama’s two identical attempted 3 pointers in the 23rd and 27th minute were off target. Rizah Mubarak on the other hand maintained his 100% success rate putting over a penalty in the 29th minute. A score that remained unchanged for the remainder of the 1st half.

The Cops started the 2nd half brightly, earning a penalty and kicking it to touch which saw them inside their opposition 22’. But as it turned out to be such forays in to Havelocks territory proved to be a rare occurrence and easily dealt with by the Havies defense. Instead it was the home team who went to score their third try distancing themselves from their opponents. Close range “pick and goes” seemed to be the plan from the Havies forwards and given the fact their opponents were not effective in their ‘one on one’ tackles, the plan seemed effective. It was under these circumstances that skipper Jason Melder Barged his way through in the 50th Minute. Mubarak was yet again on target with his kick to put his team in a comfortable 24 point lead.

The home team did look rusty on a few occasions which could have been due to the first game of the season but such was their grip on the game that those mistakes never had a telling impact. The hosts were over the mountain and far away by the 65th minute as they collected their bonus point try through Rizah Mubarak which was helped by a scintillating run Kevin Dixon. Mubarak converted his own try and Havelocks were in total command. (HSC 31 –POL 00)

With the game seemingly won Coach Sanath Martis sent out his reinforcements to consolidate their grip on the game. Havelocks sealed the game with a try right at the end and it was Kevin Dixon who ended up scoring a brilliant try by the corner flag. Kevin who was started the game as Winger saw his speed take him a past the desperate Police defense and when it came to the last man Kevin used outfoxed the full back with neat bit of footwork and finish off a superb back division move.  With Mubarak Substituted Dulaj Perera took over the kicking responsibilities but his conversion attempt was way off target. (HSC 36 –POL 00)

Nonetheless it didn’t take away the shine off a good win for the hosts. Havies will meet Air Force next week at the same venue.