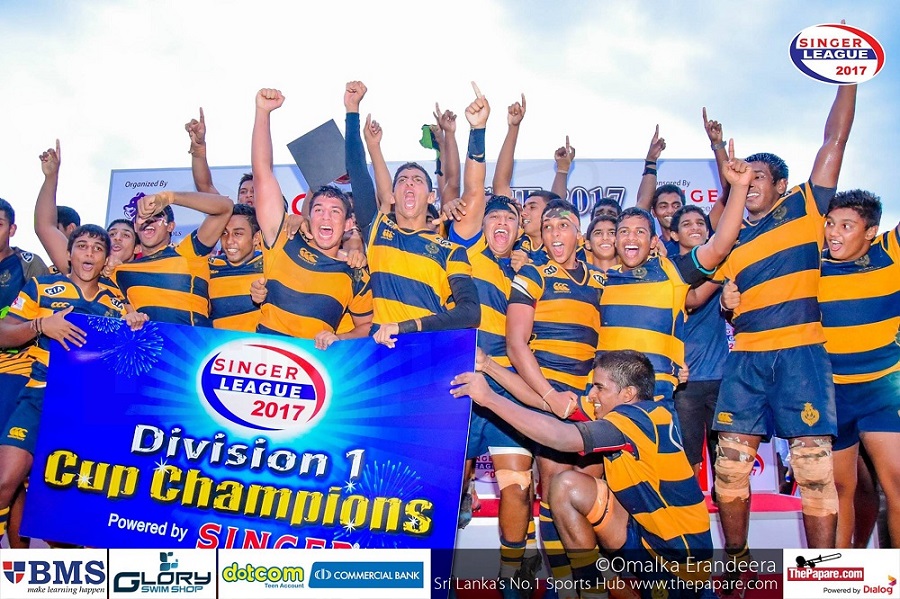 To the victor goes the spoils and so to Royal College all praise should be given. What a wonderful achievement for the boys from Reid Avenue to go into the lion’s den and steal top spot from Trinity College.

Royal College have been a team that has been growing all season. A team without a forward pack to start the season and now they have become the competition’s dominant forward pack. The coaching staff of Martis and Lewke need to be singled out for firstly knowing the players skillsets well enough to change backs into forwards and then having the coaching skills to make those changes a success.

To be a successful coach one must wear a number of hats and be able to change hats seamlessly and with ease. There is the political coach’s hat that gets a coach into a coaching position in the first place. This hat is necessary in all the parts of the world that I have been involved with rugby but it plays a bigger part here than anywhere else on the globe. Maybe it is because there are so many different tunes being played on the political dance floor it is difficult to know which song is going to be the most popular. A foreigner trying to explain the political machinations of the Sri Lankan rugby landscape is like a father trying to explain child birth pain – I have a general idea of how it works but I really don’t know what I’m talking about. We can leave that article to someone more knowledgable but we know it is an area that needs a coach’s attention.

The most important hat a coach dons is that which holds all of their rugby knowledge. Pure and simple. Rugby knowledge is the key to being a good coach and it is the one area coaches cannot fake. This is all about the finer details of how things work. Like how to form a rolling maul or how to clean out a ruck. The finer details can be boiled down to where to place your feet, where to bind, how do you get the forwards to push together, how to fake the jump to the front, how to change the point of attack and the list goes on. It is apparent to all that Royal College have the coaches that understand the intricate art of both of these facets of rugby play. Any coach can say let’s form a driving maul from a line out inside the attacking 22 meters. It is the detail that matters here. The exciting part for rugby fans is that all areas of rugby can be taken to this level by concentrating on the detail. So as coaches focus on their own area of expertise they also continue to grow and strive to be more competitive.

After a closely wrestled encounter amidst a packed stadium..

All areas of the game need the coach’s attention and as teams play and advance through the season new skills and tactics are applied as the coach sees fit. There is no point in having a great attack if you cannot secure good set piece ball, but if you have an attack ball retention is essential to holding the ball and building pressure. What about defence and defensive systems at set-piece time? Or defending against a team that has a competitive box kick? Or a team that attacks through the 12 / 13 channel? All these facets of the game need to be balanced into the team’s DNA and different styles of coaching can be seen in the way teams play the game. Try and guess what skills Royal College spend most trainings perfecting?

The player management hat is worn at all times also and this involves how you relate to the outside forces that players contend with. Distances to travel to training, nutrition and health care, assessment, treatment and rehabilitation of injured players, influences that family and friends have on players at training and on game day. All of this is covered by the player management hat which is all about getting the best out of the players with the resources at hand.

There is an analytical hat that is often left on the hat stand that plays a huge part in specific preparation for opponents and also correcting skill errors of team members that form the basis of weekly training. Sir Graham Henry believes analysis makes up 25% of coaching and who am I to disagree. Having the ability to show players what areas need improving makes coaching easier as it can reinforce patterns of play or attacking shape or defensive systems. All three of these mentioned areas are concepts that can be talked about, drawn on a white board and marked out with cones but often the penny only drops when players see footage of themselves in those scenarios. Learning how to best use analytical tools is on-going because new programs are constantly being introduced and systems are still in the infancy in this country.

How are coaches measured to see if they have done a good job? Is it only the team that has won the most games that has a good coach or is it the one who has made the most advancement up the ladder? There can be only one champion so what of the other coaches? Should they be sacked or congratulated?

I can honestly say that all coaches I have meet in the Singer Schools Rugby League, and in the many other leagues I have been involved with, are doing a great job. How do I know? Because coaches  typically enjoy the challenge. Generally all coaches want to get better, all coaches want their teams to fulfil their potential and all coaches are giving it their best. Coaches are not in the business for the money because the job can consume every waking moment. I’m not saying it does all the time but when the heat is on it is difficult to take your eye off the ball.

Sir Graham Henry once said “if you want to be a better coach get better players” and that is certainly the case here this year with Royal College. They may not have started the season with the best forwards but they certainly ended it with the most complete pack.

Congratulations once again to Royal College, the players, the administration and all of those associated with the team but a big congratulations must go to the coaching staff who wore all of the hats to finish the season ahead of a very competitive chasing pack.