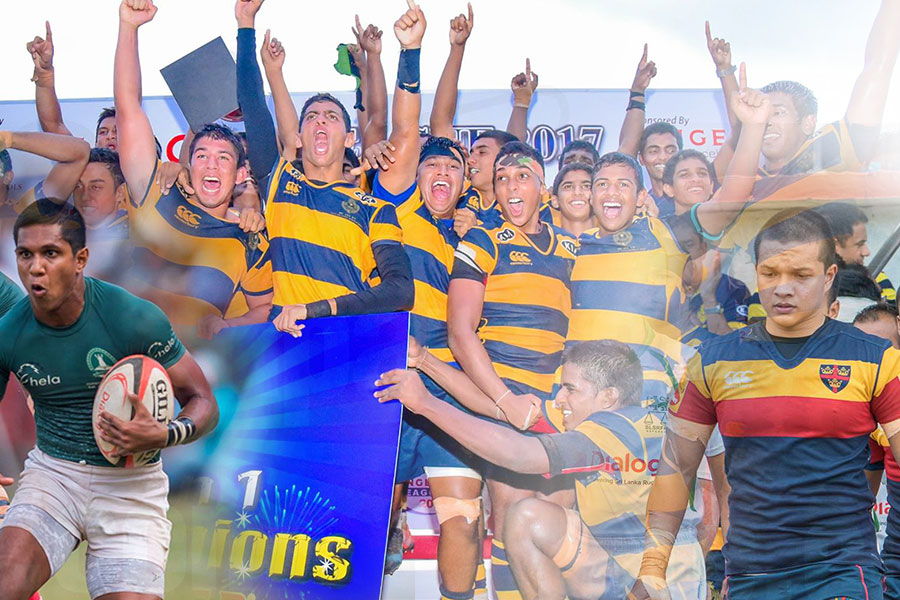 There couldn’t have been a better finish for the eleven week School Rugby League as Royal College laid their hands on the prized league title after a lapse of two years shattering the hopes of Trinity College in their own den.

After eleven exciting weeks of schools rugby action, the 2017 edition of the momentous schools rugby league came to a conclusion yesterday with the final four games of the cup championship worked off.

The league that had four contenders at the conclusion of the 1st week of the 2nd round later was narrowed down to two teams going to the final week.

Schools League down to the wire; Bradby to decide 2017 race

The third week of the Schools Rugby League saw the four-horse race narrowing down..

The first leg of the 73rd Bradby Shield that also climaxed to become the deciding fixture of the Singer Schools Rugby League saw Royal securing a hard- fought victory over Trinity College at home. The full-time scores read 22-17 in favour of the Reid Avenue lads.

This win being the second one in Pallekelle for Royal College will be a historic achievement as this encounter also got them the important league title.

Three more games took place on the final Saturday of action and it was Isipathana, St. Joseph’s who recorded wins while it was a stalemate in the encounter that involved St. Peter’s and S. Thomas’.

Isipathana College had an easy routine against Wesley, barring them from scoring a single point in the final encounter winning it 28-00 at the conclusion. The Josephians met Zahira College for what could be phrased as the ‘Maradana derby’ and it was St. Joseph’s who got the better hand with final scores reading 38-14.

The final week of schools rugby witnessed the first and last draws of the season as the encounter between S. Thomas and St. Peter’s ended in a draw. The score at eighty minutes read 25-25.

After eleven weeks of action, the Singer Schools Rugby League points table as at Sunday 21st May 2017 will be as follows:

The past nine weeks have had only one team taking the top position in the league and even after their loss to St. Peter’s, Trinity College were in the forefront with their points average.

Disappointedly Trinity College will have to contend with a third place finish despite leading the table for a considerable time with their net average (4.56) being lower than that of Isipathana (4.6) although both teams have lost two matches respectively.

Royal College will take the top spot to take the league title as Ovin Askey’s team secures the baton forward from Bhanuka Gamage who won it for Royal in 2015.

This is the first time in four years that a team has been able to win a league title even after losing a match. The winners of 2013-2016 ended up remaining unbeaten.

Last year’s winner Isipathana College should be more than pleased to finish in the second spot as they have an average of (4.6) at the conclusion of the season.

The Wesleyites shouldn’t be too worried about their performance taking heart at how they shifted gears from the first match towards the end stages. The Double Blues will take the fourth position losing only to Trinity, Royal and Isipathana.

After ending eight in the table last year, Wesley should be happy with their performance as a unit to get that fourth place in a much more competitive playing field.

The Josephians missed out on that important fourth place finish by just 0.05 point average. Wesley College had with them an average of 4 points and St. Joseph’s will have to the fifth place with an average of 3.95. They showed promise and will be a reckoning force in the coming seasons.

If there is any team that needs to be applauded for making the league more competitive, it should be St. Peter’s. The Peterites created the upset of the first round defeating Isipathana College and later giants at the time Trinity. However, after beating two big teams, the Bambalapitiya brigade would know they could have done much better than sixth on the table.

Finishing second last year, S. Thomas’ failed to keep up the momentum this year, as Naveen Henakankanamage’s Thomian team was a disappointment winning only three out of the nine matches they played.

Zahira showed some good momentum adding much excitement to the league in the first round but failed to live up to the expectations in the second round, losing all four of their second-round games. However, they must be pleased about surviving the first round to end up in the cup championship.

In conclusion, the Singer Schools Rugby League 2017 has seen one of the most highly competitive versions and the most frenzied schools rugby fans were treated to some excellent fare.

ThePapare.com thanks all its ardent fans and followers for being part and parcel of the league and we hope that we have done justice in our coverage of this electrifying passage.

Schools rugby to add more spice to the March Madness