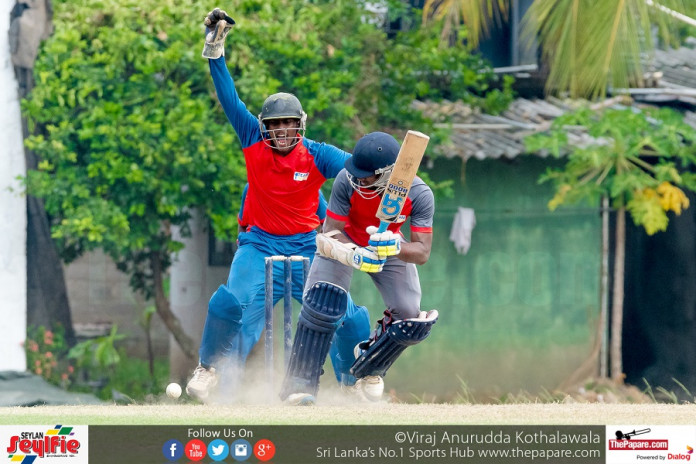 Captain Harsha Cooray scored a valiant 126 but it was insufficient to guide Kilinochchi home, falling short by 4 runs in the final game of the group stage against Vavuniya in the Inter District one day tournament.

Winning the toss and having a bat first proved to be the right decision for Vavuniya as they put on a respectable 283 in 50 overs.

Openers Akila Lakshan and Tharindu Dilshan put on 85 runs for the first wicket partnership as the duo took the opposition bowling apart in the first 10 overs. Tharindu Dilshan was the first to be dismissed as the left handed opening batsman was caught off the bowling of Suraj Randiv.

Samith Dushantha came to the crease and he along with opener Akila Lakshan got together and put on 55 runs for the third wicket partnership. The 4th wicket partnership was a prosperous 84 run stand as Vavuniya closed on 250.

A mini collapse from then on brought the scoring rate down as Kilinochchi District pegged back the batsmen and managed to restrict them to 283 even though they seemed to be on course for a 300+ score.

Akila Lakshan (79) and Samith Dushantha (70) were the pick of the batsmen for Vavuniya as 134 runs was divided between the remaining nine batsmen.

Suraj Randiv (2/35) and Kasun Rajitha (2/54) were the only two bowlers who managed to make head way through the Vavuniya batting as their colleagues failed to disturb it.

Kilinochchi District had the worst possible start in their chase of 284, losing opener Irosh Samarasooriya in the second ball of their innings.

Harsha Cooray continued on his merry way even though fellow Cooray, Sangeeth was caught and bowled off the bowling of Manjula Jayawardene for a well compiled 65 off 86 balls which included 5 fours and 2 sixes.

Captain Harsha Cooray made a well deserved 102 off 104 balls. He continued to score at a reasonable pace as he witnessed the fall of wickets at the other end.

Harsha’s was the 5th wicket to go as he eventually fell for 126 off 132 balls with 10 fours and 3 sixes. Vavuniya sensed an opening with the dismissal of captain Harsha Cooray and tightened the screws on the Vavuniya batsmen.

Shehan Madushanka came in at the fall of the fifth wicket and contributed with a 31 run cameo off 19 balls with 4 fours and a solitary six. Madushanka was starved off strike as he too witnessed the departure of partners at the other end.

The game went down to the wire as Kilinochchi District needed a further 8 runs off the final six balls in the run chase.

Sasindu Perera was entrusted to bowl the final over with his left arm spin. Perera began well and conceded just 3 runs off the first 4 balls. Needing 5 off 2 balls, the Kilinochchi batsmen threw everything they had with the bat. First Harshika Fernando failed to connect giving Perera a simple return catch in the 5th ball of the final over. New batsman Avishka Fernando came and went off the final delivery as he was clean bowled in the last ball handing Vavuniya a nail biting 4 run win.

The quarter finals are scheduled to begin on Wednesday (29th March) as the tournament comes into the knockout stage.