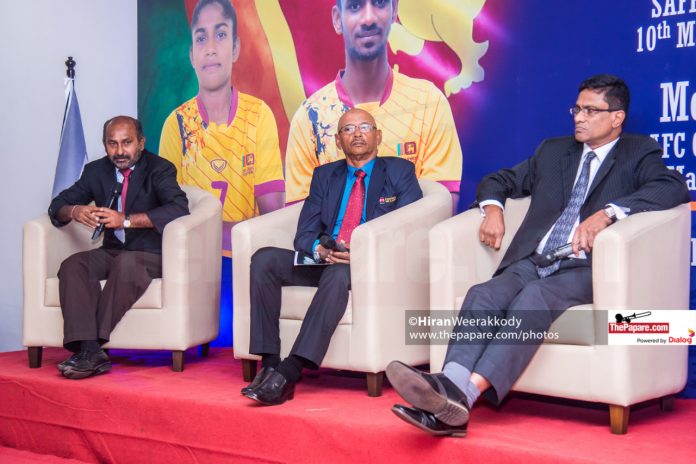 The biggest single sporting event in the World, the FIFA World Cup will see its 22nd edition in 2022 in the State of Qatar. 32 teams will find themselves a spot in the Finals in the summer of 2022. Sri Lanka too will be taking part in the qualifiers from the Asian region.

A media briefing to announce the Sri Lanka …..

The FIFA World Cup takes place every 4 years.  Even though the final tournament is in 2022 the qualification for the finals will start from 6th of June 2019. Such is the extent of the qualification process.  Established world cup winners too prepare years in advance for the next tournament.

The Sri Lankan Senior National Football Team currently does not hold any planned training sessions to our knowledge. The head coach of the National Team, Nizam Packeer Ali is working with a U23 squad which is preparing for the Asian Football Confederation (AFC) U23 qualifiers which will take place in Bahrain later in the month.

The domestic league season, the Dialog Champions League came to an end in the early part of February and except for Colombo FC, who are currently taking part in the AFC Cup 2019, no other club is under a strict training regime. Hence the players are on their off season.

Owing to the fact that Sri Lankan Football is not at a professional level, one cannot expect the players to maintain work out sessions, diet plans. This adds to the already existing problem of the lack of physical fitness and stamina.

The last international match Sri Lanka played was a friendly game against Malaysia on 12th October 2018 at the Sugathadasa Stadium. The Lankans lost the game 4-1. The Hype of “International Football is Back” caught the eye of many football followers and the starved public looked forward for International Games. The FFSL managed to put up 3 International Friendly Matches in the year 2018. We are still waiting for the remainder of the return.

Another notable announcement from the FFSL was the “Vision 2030”. So far, the general public is yet to be informed of the objective of the vision and the expected outcome.  Year 2019 was named as the year for Women’s and Youth football development. However, the SAFF Women’s championship which was awarded to Sri Lanka to be held in December 2018, saw Sri Lanka surprisingly withdraw from hosting and the event was shifted to Nepal.

As for the World Cup Qualification, Sri Lanka, the lowest ranked team in Asia (48th) and (201st) in the world will have to go through the process of playing in a playoff round as they did in 2015 against Bhutan where they lost 1-2 and 2-1 in both legs. 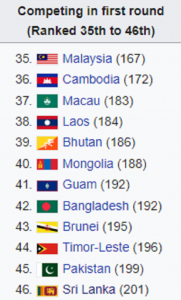 Speaking at a recent media briefing to announce the Sri Lanka Women’s and Men’s U23 teams, the president of FFSL Anura De Silva mentioned that they are trying to build strong national teams and look for the future with the current U23 squad which will be a feeding line for the National team.

“We will prepare for the World Cup qualification in June with the current squad and the U23 players included.”

He also happened to mention the World Cup qualifiers are too on its way and the team will need to prepare along with the current U23 squad.

Head Coach Nizam Packeer Ali in a Media Release mentioned the current U23 squad does not have much experience locally or internationally.

“The boys are not much experienced locally or internationally. But we have a talented and physically strong team. Though we conduct practices in a short period of time. We hope to give a good competition in these qualifiers.”

One ponders how players get selected to a national U23 squad without much experience playing locally. As Sri Lanka football does not have many International games at Senior or Junior levels it’s understandable the exposure to an international game is seldom. The biggest question is to be asked is how a squad of 32 players does not have much experience playing in the local football tournaments.

Training time too has been limited as per the Head Coach despite this concern being raised a million times in the past.

Looking ahead to the first game on 06th June 2019 Sri Lanka National Football Squad is still in the pipeline. The U23 team will return to the Island on 27th March 2019 giving the Head Coach exactly 70 days, not to mention the number of holidays coming in the month of April and May to select, train, practice and put out a team to kick off a World Cup Qualifying match.

India, ranked 103 in the world, recently took part in the Asian Football Championship and will not start their campaign till September 2019. However their 35 man squad is regularly training despite not having a head coach. The Indian Super League has now transformed Indian Football to be able to compete with the best of Asia. So great is the development that they were able to send a second string team to the recently concluded SAFF Championship and still make it to the final.

Is the FFSL really taking matters seriously to develop the game and the national team? If so when can the supporters of Sri Lanka football really see progress? In sports, winning and losing is part and parcel of the game. What the supporters want to see is improvement even if the team is losing. The players too need the support to develop and improve their skills. It’s not only about getting a qualified coach. The production line must be streamlined to have quality players coming through the system. This area is still not being addressed by the administration.

Improvements must be made from the grass root level to the national level. Given the magnitude of the task, one wonders if the administration deliberately prolongs laying down plans or simply fails to execute them.  Vision 2030 is still to be revealed and no one knows when.

Running of the DCL 2018 was a nightmare for team management and coaches. Fixture congestion coupled in with commitments outside work has forced many players to leave the squads prematurely. Clubs incurred unnecessary costs in travelling due to incomplete games – this is just the tip of the iceberg.

Come the 6th June 2019 Sri Lankan Football lovers will come in numbers to support the Lion flag, it’s now up to the FFSL, Team Management to put up a show on the field and send the poor man home happy.

Why were they dropped from Sri Lanka U23 squad?