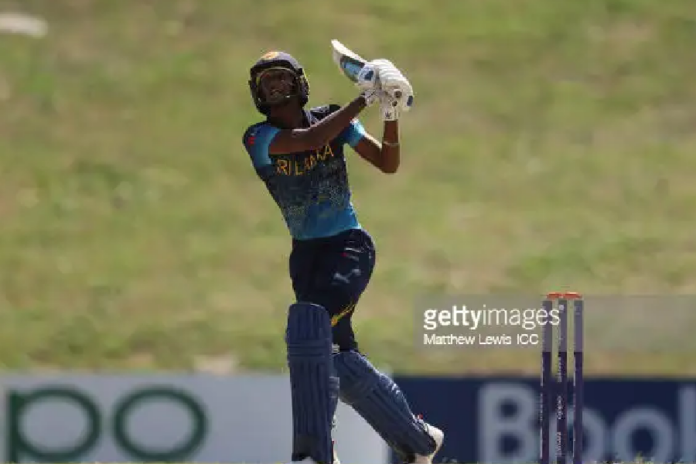 The county cricket ground at Essex, a ten minute walk from the Chelmsford train station may not be as inspiring as Lord’s or as historic as The Oval or as modern as Headingley.

It’s a small ground that can barely house 5000 fans. One thing to like about the ground is that it is surrounded by berry bushes – blueberries and blackberries.  Several locals turned up for the game and they appreciated the cricket that Sri Lanka under-19 played – attractive and attacking.

When they were set a target of 273 in 59 overs or two sessions, most teams would have shut up shop and played for a draw. But you wanted them to at least try. When first innings centurion Asitha Wanninayake departed reducing Sri Lanka to 48 for four, that should have been game over. England possessed four very good fast bowlers and all of them have got experience in County Cricket so saving this game looked like one hell of a task. But Ranuda Somaratne had other ideas.

A very organized player with a tight defence, technically he is sound. His specialty is like some of the South Indian batsmen such as G.R. Viswanath, VVS Laxman and Mohammad Azharuddin as he uses his wrists a lot and those flicks to the mid-wicket boundary were a treat to watch. In fact, Sri Lanka’s win, with an over to spare, was brought up by one such stroke for four. Now, it’s one thing to play the flick against spin but quite another to do the same off pace because if you get the timing wrong, you are a goner. When someone executes that shot properly, he’s got to be a special player.

Why you say that his game is organized is that he’s batting at five, which requires the temperament to bat with the lower middle order and this he did quite well. The attacking part was left to Lahiru Dawatage while Ranuda played the anchor role. The wicketkeeper is a bit of dasher and another exciting talent. He looks a natural leader and has a sensible head behind the stumps. Once the partnership was broken, Ranuda changed gears and he became the attacker.

It was Asitha Wanninayake who set up the game with his first innings hundred. England had scored 387 in the first innings and going by Kumar Sangakkara’s theory, a team that scores 400 runs is unlikely to lose. The left-hander batted for over seven hours to ensure that Sri Lanka took a first innings lead and stayed ahead of the game.

Wanninayake looks a good long format player. Taking lot of time to settle down and rarely plays a high risk shot. He looked set for a big one in the second innings as well but was  hit on the helmet by Dominic Kelly and soon a good ball from the same bowler got him.

Both Wanninayake and Somaratne are from  Kurunegala. Cricket took them to Kandy. While the former moved to St. Anthony’s Katugastota the latter took up a scholarship from Trinity.

Duvindu Ranatunga, the right-arm quick looks a special talent. Just 17 years of age, he is a bowler in the mode of the indefatigable Dhammika Prasad. This is the first time he has come out  of the country but nothing has rattled the young man.  The good thing is that he can play the next ICC Under-19 World Cup. Already bowling at 130kmph, we will hear a lot more about him over the years.  Ranatunga is from Ratnapura and he arrived at Mahanama College after passing the Grade Five scholarship. For a late developer, his skill set is something.

The scoreboard suggests that Dulaj Samuditha claimed only two wickets and went for plenty of runs but the left-arm quick from Weeraketiya bowled with lot of fire and was making life difficult for batsmen with his awkward angles. Doing basics right and waiting patiently rather than pushing too hard is something that he can work on and his  pace will do the job. You can not entirely blame him as he bowled to attacking fields despite runs leaking. The good thing is that all these players are from outstations and as Arjuna Ranatunga  says, the talent is out of Colombo.

Captain Raveen de Silva too was a standout performer scoring 62 in the first innings and the 50 run partnership between him and Somaratne steadied the Sri Lankan second innings after the tourists were reduced to 48 for four. His leg-spin also fetched him three wickets. It was good to see the coaching staff leaving the captain alone letting him make the decisions on the field, something that we rarely see these days in cricket games involving schoolboys.

Under-19 tours should be all about developing young players. The Sri Lankan team management and coaching staff have done an excellent job at it. The team’s muted celebrations after the winning runs were scored suggested that they have the bigger picture in mind. The future of Sri Lankan cricket certainly looks bright.