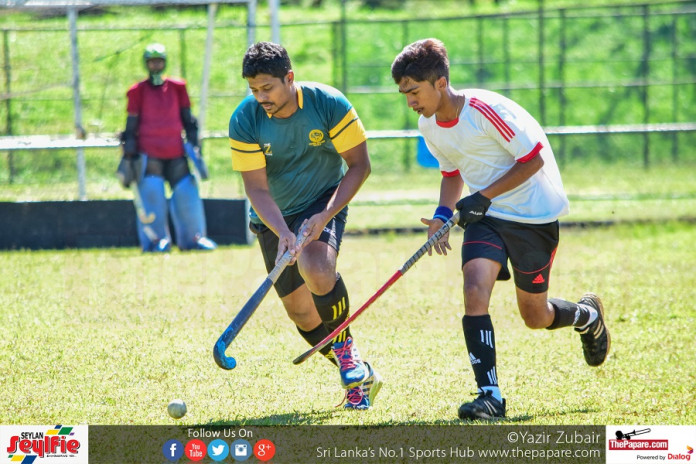 The first day of the  Kandy Hockey sixers’ kicked off today at the Peradeniya University Grounds.

The tournament started around 8 am after a small opening ceremony and a speech made by the principal. A total of 65 matches were scheduled to have been completed but due to the heavy rains, play was interrupted which reduced the number of matches that was completed for the day.

The tournament was divided into 6 categories.  Men’s Super 9 and women’s Super 8 was where all the Clubs and the Forces’ hockey teams competed in 2 groups.

Sri Lanka Navy, Air Force, Army and CH & FC were some big names in this category. Group A was won by Air Force A in both Men and Women as they remained unbeaten in their 4 matches. Army secured the top spot of Group B in the Men’s category defeating the rest of the teams in the groups rather convincingly. President’s ‘A’ won the women’s category in the Group B. This was the only category where all the matches scheduled for the day was played out.

There were also two categories for both Men and Women where all the Old boys and Girls took place. They were grouped into 4 where the Old Rajans, Kothalaawala Defense Unit A, Old Slyvestrians, and University of Peradeniya topped their groups although there were some more matches to be completed tomorrow on the second day. The most exciting match was between Old Sylvestrians and Anthony’s SC where both scored 2 goals apiece. This particular category in the women’s section was named as veterans where the clubs fought off in two groups A and B, as all the matches weren’t completed due to bad whether the group winners weren’t selected.

There was a schools tournament where all the schools from U15 around the central Province took part. Here too all the matches weren’t completed but Seethadevi A, B and Mahamaya looked liked they had more points than the rest. Dharmaraja, Trinity and Kingswood showed dominance in the Boys’ categories.

Tomorrow will be the second day of the Kandy Hockey sixers’ where the matches that couldn’t be played today will be played as well as the Quarter finals and the Knockouts, where the trophies for the winners will be handed at the end of the Day.