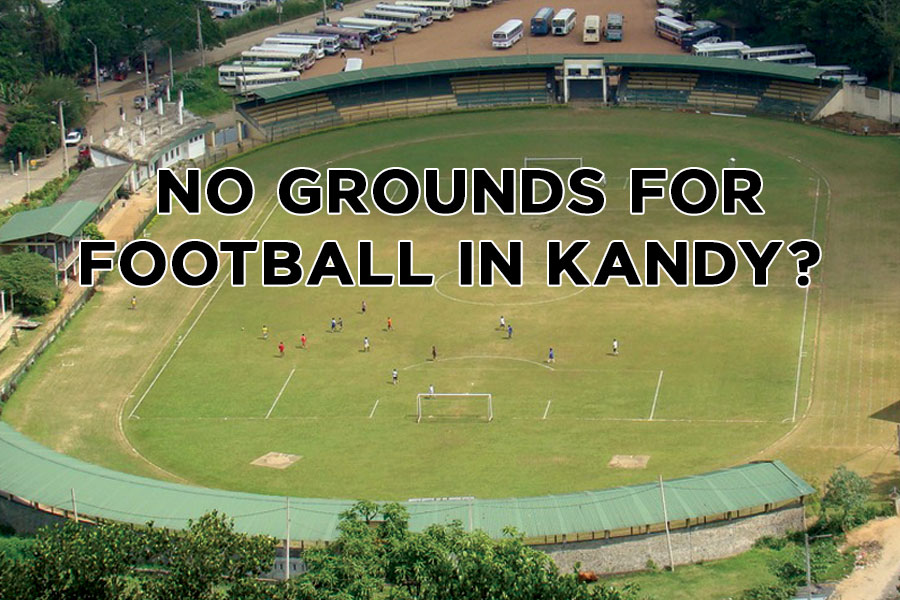 Once a factory for footballing talent, Kandy has today become a city with no proper football infrastructure, lacking even the resources necessary to conduct club level training sessions.


With no team in the Champions League, ThePapare took it upon us to investigate this fall from grace in the hill capital’s football.

What do you need if you want to have a kickabout with the lads? Ball. Boots. Goals. And most importantly, Grounds.

Back in the day, the Hill Capital was littered with football turfs. Getambe, Nittawela, Podi Bogambara, Police Grounds and the legendary Bogambara stadium were all stadiums freely available to the youth of the area. Today however, this is not the case as most of these grounds have been taken up for other purposes and this seems to have influenced Kandyan football’s swift downward spiral as today, the youth of Kandy has no space to hone their skills.

ThePapare.com spoke to an influential figure in the Kandyan football circles who agreed to give us the dirt on the current situation of the sport in the area.

“Kandyan Football has hit a new low recently and a lot of it is to do with no grounds being available. Nittawela is now solely used for Rugby as their lease, which expired, has been renewed with the help of a Ministerial hand. The Getambe ground has been taken for Cricket while the Police Grounds are no longer available.”

With lightning pace that leaves defenders gasping for air, and an eye for a finish that is reminiscent of a certain Mohamed Issadeen, the football crazy city of Kalutara has found a new shining light in young striker, Nirmal Udara Perera.

When asked as to what effect the lack of grounds has had on the youth in the area, we were told that,

“the youth participation hasn’t dropped. But we have had to resort to using grounds like the one at Deiyanwalala and Aruppala, which are very small to train the teams. Even the Mahaiyawa grounds have had the goalposts removed and is now used for Hockey.”

Kandy has been home to a number of legendary teams who have made their mark on the local football arena in the past. This includes the likes of Sunrise SC, York SC and former Champions League side HiLine SC who have either fallen to extremely poor standards or have ceased functioning altogether.

“In Kandy, clubs can’t afford to pay rentals as they don’t have the finances to do so. It’s usually the club owner who funds the ground fees as well. This too is tougher now. Grounds like the Bogambara commands around Rs.10,500 per day and last I heard, that too has increased. This has taken its toll on the Kandy Football League as matches have gotten clogged as there is no place to play games and practice spaces are sparse too. Crystal Palace, our strongest team, uses the Gampola Zahira grounds to train, and the maintenance there is also not up to the mark.”

“Increasingly, a lot of our players are now leaving Kandy and joining the Armed Forces sides to pursue their football career. If not the forces, they move to Colombo and play for clubs there as the money is better. In the future, we will have no more strong Kandyan teams to challenge for titles as we lose our talent”, said our source.

When asked about the stadium that was set to be built in Kandy during Sports Minister’s Aluthgamage’s time in office as a football venue, ThePapare.com was told,

“We were promised a ground from FIFA that was set to cost hundreds of millions of US Dollars. The ground was set to be built in Dangolle and was on a ground given on a 30 year lease by the Municipal Council on an alternative 6 month basis between the FFSL and the KMC. The gazette was passed and the money was made available but in the end, it didn’t come to fruition.”

“The Kandy Municipal Council must take the complete blame for the situation. Due to their poor administration, they have taken apart the football infrastructure and now turn a deaf ear whenever we try to bring things to their attention. If things go on like this, football in Kandy will go to the dogs and there will be no turning back.”

Rugby is king in the hills, but never has the situation of the nation’s most widely played sport ever been so dire. The lack of basic infrastructure like a ground is unacceptable if Sri Lanka is to continue to push towards success, at least at the South Asian level and is a problem that needs immediate addressing.

With this in mind, ThePapare tried to approach KMC officials for comment, but the respective officials could not be contacted on both official and personal lines.

We then took the issue to Sports Minister, Hon. Dayasiri Jayasekara, and the Minister took steps to contact FFSL President Anura De Silva and have the Digana ground be arranged as an alternate venue to play the matches as a short term option, while promising to continue trying to find more of a permanent solution to this issue.

ThePapare.com will be on the ball, ensuring that the authorities follow up on these promises and fulfil them to the letter, for the sake of the sustenance of our beloved game.