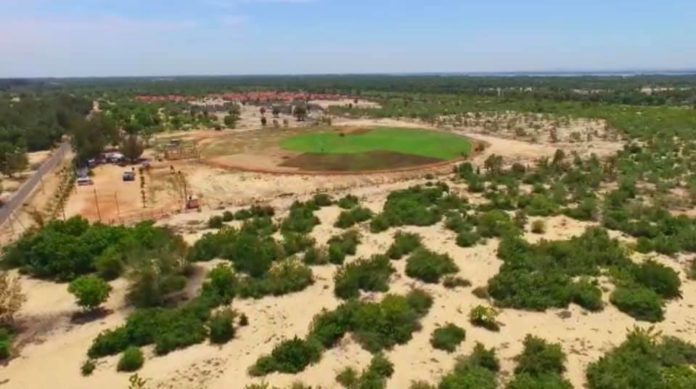 The first turf wicket of the entire Eastern Province has been laid at a private facility in the Koddaimunai Sports Village.

From Hambantota to Point-Pedro is almost 628.9 kilometers along the Eastern coast of Sri Lanka, across the four largest provinces of Sri Lanka, covering 8 districts and a land spread of 37,852 square kilometers. And this is the only ground you will find with a usable turf wicket within that area.

The ground is being built in a 10-acre land since 2016 and the turf was just. The stands, dressing rooms and lodging facilities with 30 private rooms are still under construction. It boasts a dimension of 83 meters on all four sides and also contains 98 sprinklers across the ground.

The funding has been provided primarily by a Sri Lankan ex-pat, Mr Puvanasingham Vaseeharan, who was a member of the Koddaimunai Sports club. Mr Vaseeharan is living in the UK and is a director of a company named AKV Services LTD. He is a philanthropist and has done a huge deal of services for cricket in his hometown, Batticaloa.

The land for this stadium was provided by the Governor of Northern province Mrs P. S. M. Charles. There were several complications following the allocation of the land until Mr Vaseeharan promised to take over the project completely.

The ground is expected to be ready for use by next year and the people behind this wonderful deed are expecting to make this an international standard venue within the next 10 years.

The venue is located in a scenic surrounding overlooking the Indian Ocean. With many government offices and buildings in the neighbourhood, it is expected to bring more attention and value to the stadium in the future. The members of the Koddaimunai Sports Village also hope to make this magnificent stadium a central attraction in the sports tourism field in the Eastern region.

“Once this is completed, this is going to be one of the best grounds in the North-East region.” commented the veteran left-arm seamer Chaminda Vaas.

We have only seen a handful of cricketers from the Eastern and Northern province of Sri Lanka. Almost none make it to the international arena. Initiatives as such will most certainly motivate more kids from the region to take up the sport.