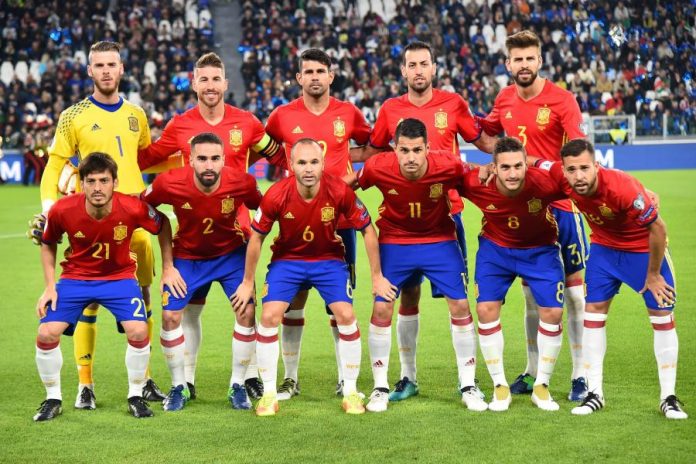 Spain, ranked 6th in the FIFA World Rankings, is one of the 8 countries to have won the FIFA World Cup championship and will be competing in their 11th consecutive World Cup this summer as a favourite among football fans.

Iceland, with its first entry into the World Cup as the smallest..

Spain is a country with a football history that dates back to 1934 when they made their debut appearance in the Football World Cup. The team has made two semi-final appearances in which the first one was in Brazil in 1950 where they were placed 4th in the tournament.

In 2010 in South Africa the team entered the tournament as European Champions and won the FIFA championship beating the Netherlands 1-0, with the winning goal coming from the boot of Andres Iniesta.

In 2014, Spain was greatly disappointed in what was called ‘A World Cup disaster’, as the defending champions were dumped out of the tournament by the Netherlands & Chile, losing 5-1 & 2-0 respectively.

During the qualifying campaign, the biggest victory Spain had was against Liechtenstein (8-0) and it helped the team cruise to the FIFA World Cup 2018. Spain beat Italy and Albania 3-0 in the qualifiers.

During the European qualifiers, Spain faced threats from the FIFA body about being banned from the upcoming World Cup due to political interference. However, they remained undefeated in the games.

Later in the same phase, Spain’s entry into the World Cup was decided after they beat Israel 1-0. In the recent friendlies, Spain was able to lead with a draw against Germany and a massive win over Argentina of 6-1.

Julen Lopetegui, who joined after the last World Cup in 2014 and succeeded Vicente Del Bosque, has made a few changes to the Spanish team, trying out new players from time to time, young and old.

A coach with past experience in coaching the U19’s and U21’s, Spain’s young teams will guide the team in Russia in his first-time senior level coaching position at a World Cup.

The playing style has changed from the last World Cup from a 4-3-3 to 4-5-1 under Lopetegui’s coaching as there has been a shortage of good wingers. His decisions regarding the squad for Russia is something to look forward to.

The major strength of the team is their unique playing style and tactics on the field. The backbone of the team who can put them through are the many players from Barcelona and Real Madrid. Gerard Pique and Sergio Ramos dominating the defense could give the team a lot of strength and physicality.

Lopetegui’s choice of players, if he finds the right balance, could be a real strength. Sergio Busquets suffering from a toe injury and one of the players who can fit in with 11 men should make his return for the World Cup.

Alvaro Morata, the impressive striker, perhaps should continue without being replaced by Diego Costa who has not been active for a while, however, if he makes his return this might be a possible challenger for Morata, given that they are the two best options the team has as strikers.

Many outstanding players of the ‘golden generation’ such as the former captain, David Villa, the top scorer in Spanish football, have retired. Xavi Hernandez and Xabi Alonso’s retirement along with Fernando Torres and Carlos Puyol are big names in the class of 2010’s championship that will be missed in Russia.

However, the team has a new troupe to reclaim the trophy once again. Sergio Ramos who was the second-most capped player from Spain is a key player as captain and starter. Currently, the captain of Real Madrid, central defender Ramos with aerial ability and strong passing skills is going to give other teams a tough time.  Though his inconsistency is a weak point, he is a determined player in the penalty boxes and in keeping the team till the last stages.

Andres Iniesta, captain and the central mid-fielder of Barcelona who scored the winning goal in Spain’s championship year is another key strength.

Isco, the Real Madrid star, who plays attacking midfielder, proved against Italy in the qualifiers that he is a player to watch out for along with David Silva, who scored 11 goals, the highest number under Lopetegui’s coaching.

Marco Asensio, Real Madrid star, can be a game-changer in Russia as well.