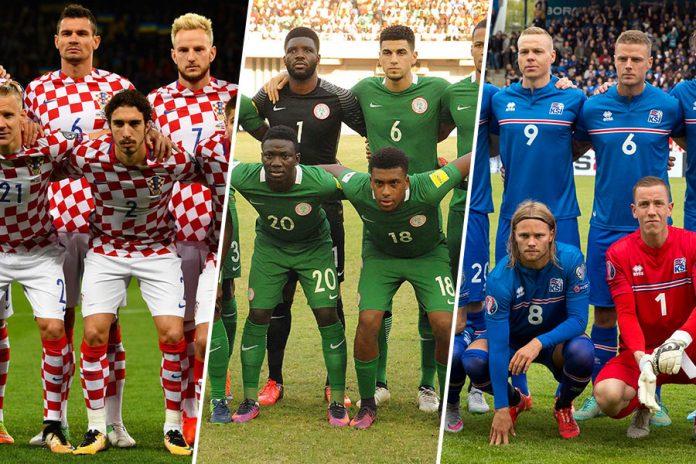 Iceland, with its first entry into the World Cup as the smallest nation inspiring other fledgling teams, will face Croatia and Nigeria, two nations who have proved themselves in the World Cup and are dreaming of glory in Russia.

Denmark, Australia and underdogs Peru has a great…… 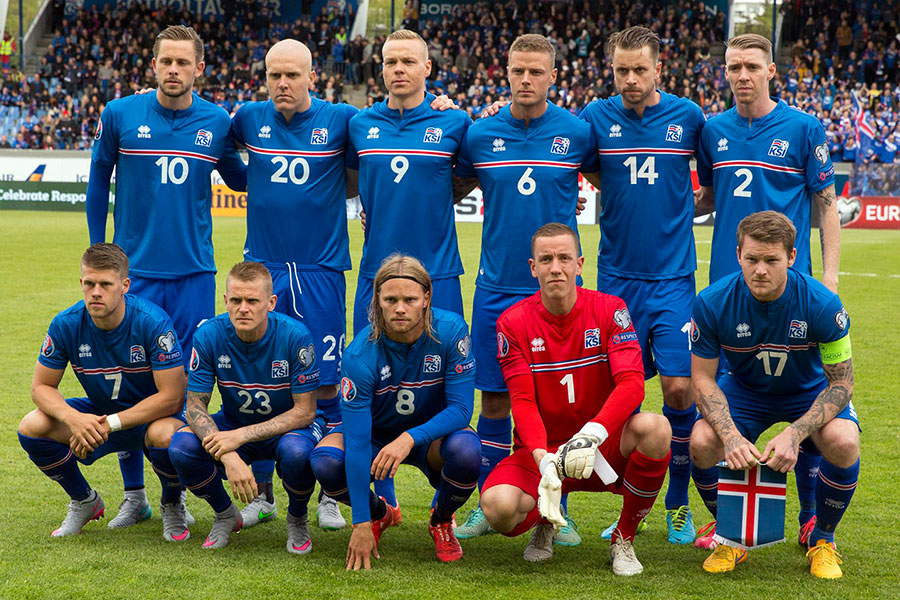 The team began entering tournaments back in 1974 and have been taking part in the playoffs ever since. Out of thirteen qualifying campaigns in the past, Iceland had never made it to the World Cup even once.

For the 2014 World Cup in Brazil, Iceland became the smallest side to make it to the third stage where they lost to Croatia 2-0. Iceland performed extravagantly well in the Euro 2016 under the guidance of Lars Edvin ‘Lasse’ Lagerback triumphing over England and Hungary.

It was the turning point that gave the nation more confidence as they climbed up to 23rd in the FIFA World Ranking and currently stand on the 22nd place leading up to the World Cup.

In 2016, Iceland beat Finland 3-2, which was the first step in the qualifying stage after a drawn match against Ukraine which put Iceland to the top of the table. Soon after they lost against Finland and realized that they had to exert themselves more into the game.

During October 2017, the team made its comeback to the top of the group after winning against Turkey. Continuing the victories, Iceland rose to the top of Group E with a shocking 1-0 victory over Croatia with a goal at the last minute.

Soon after, the team made it to the final 32 after beating Kosovo 2-0, with a daring goal after the second interval making it Iceland’s first entry into the World Cup.

Lagerback’s leadership was the turning point in Iceland’s footballing journey. Taking Iceland to the quarter-finals of the 2016 European championship, his style of coaching is remarkable and is adored in Iceland.

From assisting Iceland since 2011, Heimir Hallgrimsson became the sole manager of the Iceland team after Lasse joined Norway following Euro 2016 and will take the team into World Cup 2018.

The combination of Lasse and Heimir was a key strength the nation had during the past. Their joint managing was one of the reasons the team outplayed bigger teams in the Euro 2016 making its way up in the world rankings.

Heimir’s relatively better tactical flexibility would be a strength for the team this summer. Iceland, who plays 4-4-2, also uses 4-5-1 sometimes and three center backs in a five-man defensive line could be a tactic they use at this tournament.

Captain Aron Einar Gunnarsson, is the main force to kindle the spirit of the team along with Gylfi Sigurdsson, who was the leading goaler, contributing five goals towards the qualifying rounds to the 2018 World Cup.

However, Sigurdsson’s ability to make it to the World Cup is a question as he is suffering from a knee injury, which will put the team at risk though they have a good squad.

The other players to watch out for from their side are Hordur Bjorgvin Magnusson also known as ‘The Beautiful Death’, who holds the center back position and can deliver great results.

Since entering the FIFA World Cup in 1994, reigning African Champs, Nigeria have made regular appearances in the World Cup, only failing to qualify for the 2006 World Cup of the last 6 tournaments.

They have remarkably qualified to the round of 16 in 1994, 1998 and in the recent World Cup in Brazil in 2014 where they were eliminated by France 2-0, which came after Nigeria was suspended from international football after the 2010 World Cup.

Nigeria journeys to the World Cup overcoming strong opponents such as Cameroon, Zambia and Algeria. Though their side is underrated back home by its fans, they won four, drew 2 matches, scoring 12 goals and conceding just 4.

It was a win over Zambia 2-1 initially that drove the team to go ahead. Their second match was a win of 3-1 against Algeria as they went on to beat the Indomitable Lions of Cameroon 4-0.

The friendlies with Poland and Serbia during March were lost by Nigeria but they will play a friendly on June 2nd against England as a part of the final preparations before the big tournament.

The team will be led by German coach Gernot Rohr. Rohr, has been the coach who has stayed, restoring the team’s energy till the qualifier to the World Cup. He is confident of his squad and hopes to stick with the players who took part in the qualifying rounds.

Nigeria will have the youngest squad from the 32 qualifying nations in Russia which could prove to be a defining factor. The strongest African team going into Russia this summer, the challenge Nigeria faces will be to overcome the ‘Group of death’ with their young squad.

The absence of goalkeeper Carl Ikeme who has been diagnosed with leukaemia will also be an issue.

The key man of the Nigerian team will be John Obi Mikel, the captain who made his debut 4 years ago in Brazil and who will be the contender in midfield in the upcoming World Cup.

Shining in the UEFA Champions League in Chelsea as a defensive midfielder until 2017, he will be a much-needed pillar of strength for the Super Eagles to succeed in Russia. Currently he plays for Chinese club Tianjin TEDA as a midfielder.

Chelsea winger Victor Moses is another key payer the team can rely upon, who carries a lot of dynamics in the ground.

The players to keep an eye on include Wilfred Ndidi and Arsenal player Alex Iwobi who can turn the fate of the African team to conquer the trophy this time. 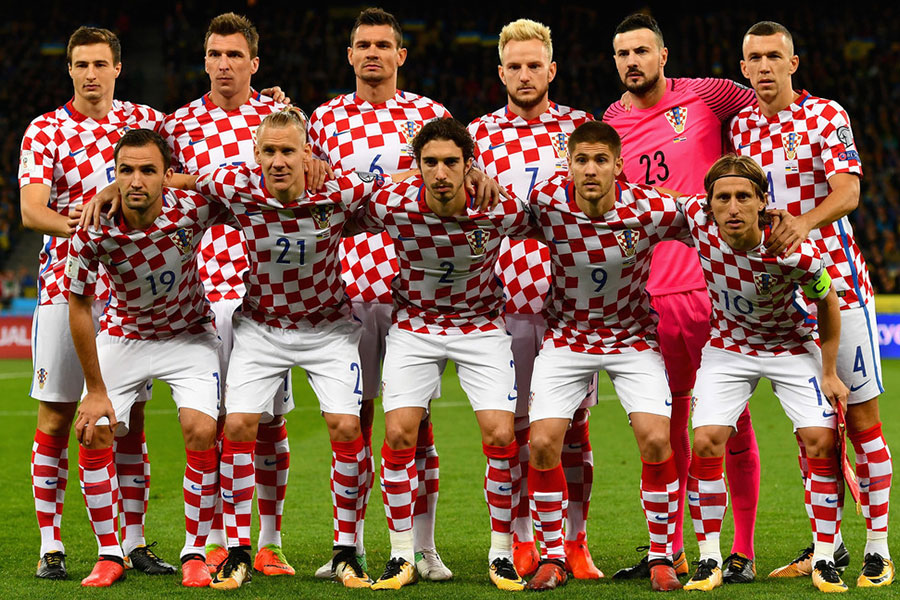 Croatia made its first World Cup appearance in 1998 where they finished third after beating Netherlands 2-1 in the 3rd place playoff. With a strong beginning, the team was ranked third in the world for 3 months, however the glory didn’t continue for long as the team fell apart soon after they failed to qualify for UEFA Euro 2000.

Croatia was on the verge of qualifying for the 2010 World Cup but failed to do so. However, they made a strong comeback as they returned to the top fray at the 2014 World Cup after beating Iceland in the qualifiers.

The journey leading them to the World Cup in Russia 2018 started with Marcelo Brozovic’s consecutive goals against Iceland after playing indoors due to the misbehaviour of some fans.

In 2017, Iceland hit back with a 1-0 win in which the team was completely out of luck. At home they finished with a draw against Finland which was soon met by a 2-0 victory over Ukraine. Finally, they beat Greece 4-1 to seal their spot.

Zlatko Dalic is an experienced coach who led the team to beat Ukraine and Greece in the playoffs. Croatia can run into success with his coaching as the team has a brilliant line-up of midfielders such as Luka Modric, Ivan Rakitic and Brozovic.

The 4-2-3-1 system with Real Madrid’s Mateo Kovacic sharing the role with Brozovic in midfield is a definite field plan. The high expectations for these players mean that the rest of the squad has to also keep their pace and for Croatia inconsistency in the recent matches have been a huge drawback.

The player who can change the game this summer is Luka Modric, the undisputable leader and one of the best midfielders in the world. The Real Madrid superstar was the first to win the Champions League competition three times.

However, he scored his first goal after three years for his national team at Euro 2016. His dribbling skills, long shots and defensive pressing makes him a key player in this tournament with his creative presence.

Ivan Rakitic, a midfielder who has a high profile taking part in major tournaments like winning the La Liga title with Barcelona in 2016 & 2018, is a creative player who holds skill such as vision, accurate passing to the box has an edge over Modric in scoring goals for Croatia.

The 6’3, headstrong Mario Mandzukic, forward, from Juventus is a player to watch out for and Nikola Kalinic, striker for AC Milan, who proved himself recently against Greece could be a game changer as well for the Europeans in Russia.