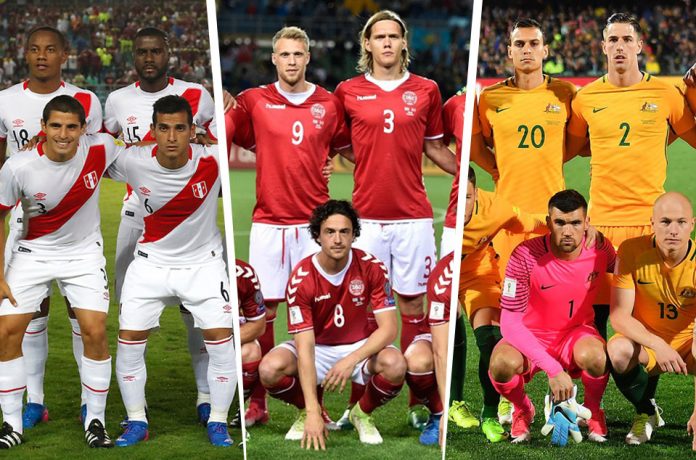 Denmark, Australia and underdogs Peru has a great opportunity to make it to the knockout stages of the 2018 FIFA World Cup from Group C.

Champions in 1966, England have failed to go beyond a semi-final since 1990, despite

Peru were fortunate enough to participate in the inaugural FIFA World Cup played in 1930 but fell short in the years to follow as the next time they appeared in the tournament was in 1970 where they were placed 7th.

Peru hold a couple of interesting records in terms of World Cup history as it was a Peruvian who picked up the first ‘red card’ in a World Cup in 1930 and a spectator base of 300 fans in that World Cup between Peru and Romania host the lowest number of spectators at a World Cup game.

Peru unfortunately didn’t qualify for the 2014 World Cup in Brazil. Their fortunes took a turn the very next year when they were placed 3rd in the Copa America Tournament, beating the likes of Brazil.

Peru ended a 36-year World Cup drought by placing 5th in the South American qualifiers and eventually defeating New Zealand (2-0) in the Inter-Continental playoff to secure their place in Russia.

Coach of the Peru national team in 2015. Being an Argentinian, Gareca played for many Argentinian clubs and even coached the Brazilian team Palmerias in 2014.

He prefers the traditional formation of 4-4-2 and none may question this formation considering the success the team has managed over the past two years.

Jefferson Farfan looks to be a key player in the Peruvian line up with his abilities to send the ball upfield and put it in the back of the net. In addition to the National team he also plays for the Russian Club Lokomotiv Moscow.

Scoring many goals in Peru’s journey to qualification, he scored one of the two goals in their decisive win over New Zealand that sealed their spot at the tournament.

Playing for the Brazilian club Flamengo, Paolo Guerrero will look to orchestrate and act as a playmaker in an attempt to steer Peru to a formidable place.

The FIFA World Cup needs no introduction. It is the pinnacle of world

Their journey of trying to qualify for the World Cup began in 1958 but unfortunately, they lost all four of their qualifying games in Sweden to England and the Republic of Ireland.

Their history at the World Cup began quite recently in 1986. Since then they have qualified for the tournament in 1998, 2002 and 2010 with their best performance coming in 1998 when they made it to the quarterfinals.

Denmark failed to qualify for the 2014 World Cup and did not feature in the Euro tournament in 2016. Their line of misfortune continued when they lost their first two World Cup qualifying games to Poland (3-2) and Montenegro (1-0).

However, they managed to pull themselves together as they went on to win their remaining games and ultimately sealed their spot in Russia by defeating the Republic of Ireland in a resounding 5-1 victory.

Age Hareide was appointed as the manager of the Danish Football team in 2015. The World Cup in Russia will be the first major tournament that he faces as a manager.

The Norwegian replaced Morten Olsen who stepped down after Denmark failed to qualify for the Euro 2016 tournament.

He is one of the key men behind the scene of Denmark’s success in qualifying for the World Cup 2018. He prefers playing with the 4-2-3-1 formation which allows his team to change its  dimensions during play without any extra effort.

Christian Eriksen and Kasper Schmeichel both have tremendous experience in the English Premier League and this will play a vital role in giving the team confidence. As for weaknesses, Age Hareide will manage his first major tournament in his career which points at a lack of experience that might prove to be fatal in the long run.

Premier League superstar Christian Eriksen was named the Danish Player of the Year in 2013, 2014, 2015 and 2017. His appetite for scoring will be vital if Denmark are to

compete well in the upcoming World Cup. He was also included in the Premier League Team of the Year in the 2017-18 season which showcases his brilliance and experience in International football.

Kasper Schmeichel will play in goal and will be a key player in coordinating the Danish defence. The exposure that he has gained in Premier League Champions Leicester City’s campaign in 2016 will equip him with the confidence he needs to keep the opposition at bay. 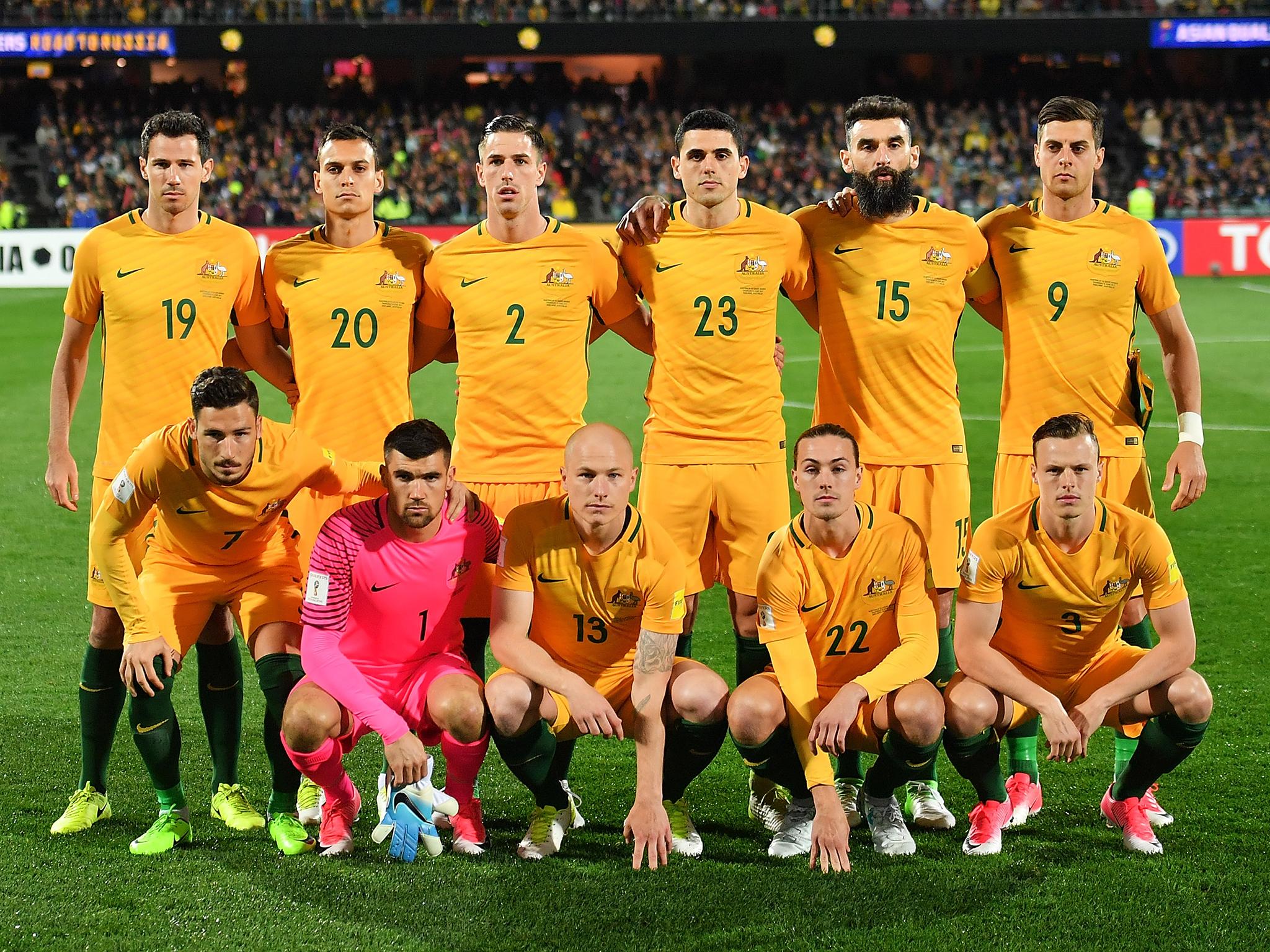 The first occasion that Australia vied for qualification to the World Cup was in 1966 but unfortunately, they lost the decisive game to North Korea 9-2 on aggregate.

Their first successful attempt at qualifying came in 1974 for the tournament in West Germany where they were eliminated in the group stages. Since 2006 they have featured in every World Cup with no notable achievements.

After their poor run at the 2014 World Cup, Australia hosted the Asia Cup in 2015. They emerged champions of Asia with a convincing win over South Korea in the finals. In 2017 they participated in the FIFA Confederations Cup, exiting after being placed 3rd in their group.

In their initial qualifying group, they won against Kyrgyzstan (2-1), Bangladesh (5-0), Tajikistan (3-0) but lost to Jordan (2-0). In the next round they defeated Iraq (2-0), UAE (1-0) and drew against Saudi Arabia (2-2) and their one all draw to Japan meant that they needed to qualify for Russia via the playoffs.

At the playoffs, a 2-0 loss to Japan meant they needed to beat Thailand with a large margin which they failed to do as they only won with goals difference (2-1). Luckily the Socceroos managed to beat Syria 3-1 on aggregate and sealed their position at the World Cup with a 3-1 victory over Honduras.

Lambertus ‘Bert’ van Marwijk will coach the Australian side as they strive for victory at the 2018 World Cup. Having been introduced as manager in January 2018, Bert has had only 5 months to mould this Socceroos squad into his vision.

He is reputed with guiding Netherlands to the World Cup Final in 2010 and also helping Saudi Arabia qualify for this year’s World Cup. Australia lost its first game under his command 4-1 to Norway following which they held Colombia to a nil all draw.

Van Marwijk was only recently put in charge of Australia. The time that he has spent in developing his team could be deemed as insufficient and thus Australia seem at a disadvantage. He still hasn’t produced a win in his short tenure as manager. The only two games that Australia played under his management have ended in a defeat and a draw.

Veteran Tim Cahill will brace himself as he takes part in what could be his last World Cup. His role as a captain will be vital as he has the most amount of experience at the World Cup and the team will be looking at him for guidance.

Cricket and Cameras – the marvels of technology

Brawling with the boys for Chinese cookies – Round two, week...

Who is the greatest sports fan?