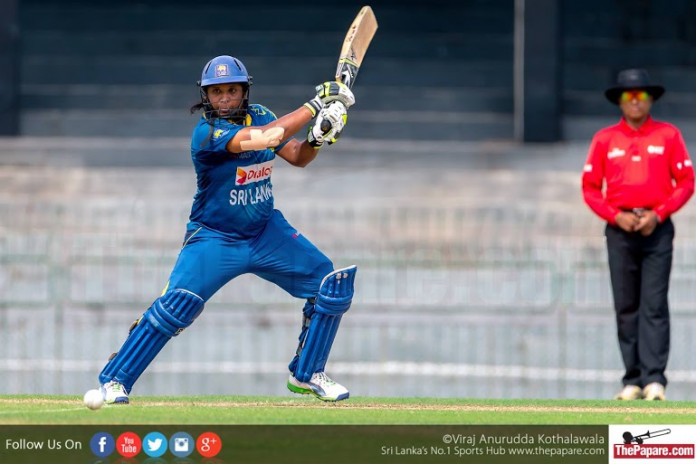 Sri Lanka overcame a stutter in the middle of their innings to post what turned out to be a match winning total of 129 against 10th ranked Ireland in their 2nd game of the Women’s WT20 thanks to some sensible batting by Eshani Lokusooriya.

Batting first after winning the toss, Sri Lanka started off in excellent fashion with stand-in skipper Chamari Atapattu really getting into the Irish bowling and putting on 45 in the 1st 5 overs alongside fellow opener Yasoda Mendis. However a double strike by legspinner Ciarra Metcalfe undid their good work as both Atapattu and Mendis fell in the 6th over. One drop batter Dilani Manodara looked set to continue her good form but was run-out by Clare Shillington, leaving Sri Lanka in a spot of bother at 55/3. As wickets fell, the run-rate too stalled as Prasadini Weerakkody tried to rebuild. Oshadi Ranasinghe was the next to go with the score on 57 and 17 year old debutant Harshitha Samarawickrama was dismissed for a duck in the same over, to give Metcalfe another double wicket over. Eshani Lokusooriya joined Weerakkody at the crease and the two put on a splendid 49 run stand for the 6th wicket to resurrect the Sri Lankan innings. The latter fell in the quest for quick runs in the 18th over but Lokusooriya remained unbeaten on 35 off 28 deliveries to lead Sri Lanka to 129.

Considering the start they got, the Lankans would be disappointed with the total they ended with but will have to be content at the performances of Atapattu, Weerakkody and Lokusooriya, who all made 30s.

For the Irish women it was Metcalfe who did most of the damage, picking up 4/15 in her 4 overs while skipper Isobel Joyce bowled went wicketless but was instrumental in keeping the Lankans in check, conceding just 11 runs in her 4 over spell. Lucy O’Reilly and Laura Delany picked up a wicket a piece.

Sri Lanka began their bowling effort as well as they had their batting effort, picking up a wicket in the 2nd over when Sugandika Kumari bowled Shillington for 1. Cath Dalton followed a couple of overs later, again to the bowling of Kumari as the Irish slipped to 18/2. Cecelia Joyce was joined at the crease by sister Isobel and the twins put on 22 for the 3rd wicket. The required run-rate continued to grow as Cecelia was dismissed by Ranasinghe for 29. Isobel and Delany put on a further 47 runs for the 4th wicket, giving the Irish a brief glimmer of hope of causing an upset. 43 off the last 5 overs proved to be too much however as the Sri Lankan spinners closed up the scoring. Ireland finished with 115 for the loss of 8 wickets. Delany and the Joyce twins gave Ireland a chance but they ultimately fell short by 14 runs.

Kumari was the pick of the bowlers for Sri Lanka, picking up 3/24 while the Lankans also affected 3 run-outs to break the back of the Irish innings.

Metcalfe was adjudged player of the match for her excellent performance with the ball.

Overall Sri Lanka will be thrilled with the win as they have had a very disappointing couple of series’ prior to this. They did go into the game as favourites to win against the Irish, who are ranked 10 in the world by quite a distance.

Sri Lanka are currently in 3rd position in Group A behind tournament favourites Australia and New Zealand while sitting ahead of Ireland and South Africa. They will face reigning world champs Australia in their next game on the 24th, in what will be a televised game.

Did not bat: Kumari, Ranaweera

Did not bat: Metcalfe