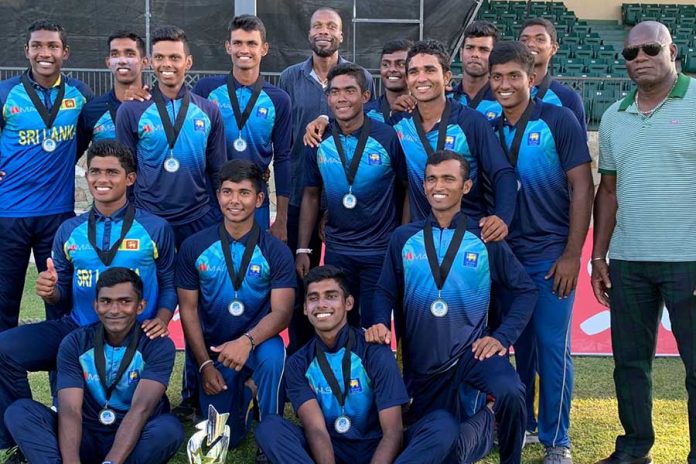 Sri Lanka U19s recorded a commanding win over England in the final of the Tri-Series (U19s) Tournament in West Indies on the 21st of December in Antigua.

After winning the toss, Sri Lanka skipper Nipun Dhananjaya made the decision to bat first at Coolidge Cricket ground and Sri Lanka openers Navod Paranavithana and wicket keeper batsman Kamil Mishara responded brilliantly with the bat as they piled on a 124-run partnership for the 1st wicket.

Royalist Mishara was run out for a well-made 69 while left-handed opener from Mahinda College, Paranavithana stroked a match winning century to follow the 73 runs which he made in the last game. His innings included 16 glorious boundaries and set the base for a 250+ total for young Lions.

A few late contributions from Ravindu Rasantha and Ahan Wickramasinghe carried Sri Lanka to 268 at the end of 50 overs, challenging the English with a competitive target on a sporting pitch.

The English boys were never in the chase as their openers were dismissed for just 10 runs before the 5th over. Their highest runs scorer of the tournament, Jordon Cox fought alone with a gritty 77 but it wasn’t enough to stop the Sri Lankan bowling attack as England were bundled out for just 188.

Centurion Paranavithana’s day wasn’t over as he chipped in with 2 wickets and the star for Sri Lanka through out the tournament, leggy Kavindu Nadeeshan stretched his dominance in the wicket takers column for the tri-series with another 3 wickets, confirming the 77 run victory for Sri Lanka. 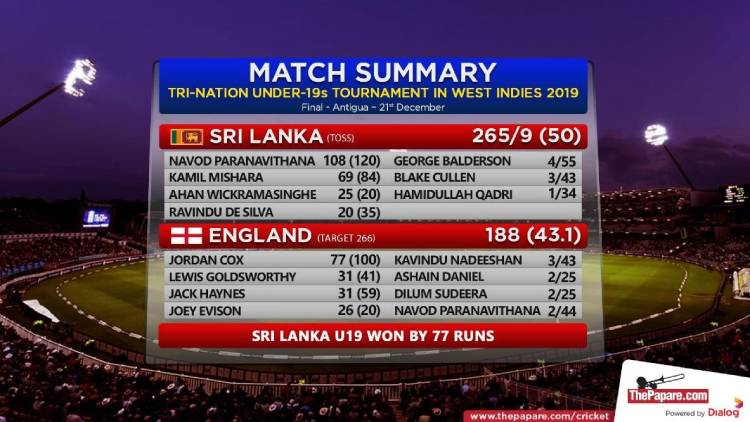 Highest wicket taker of the tournament

The  victorious young Lions outfit now has the biggest test of their lives so far, as the U19 World Cup will be held in South Africa starting from 17th January.