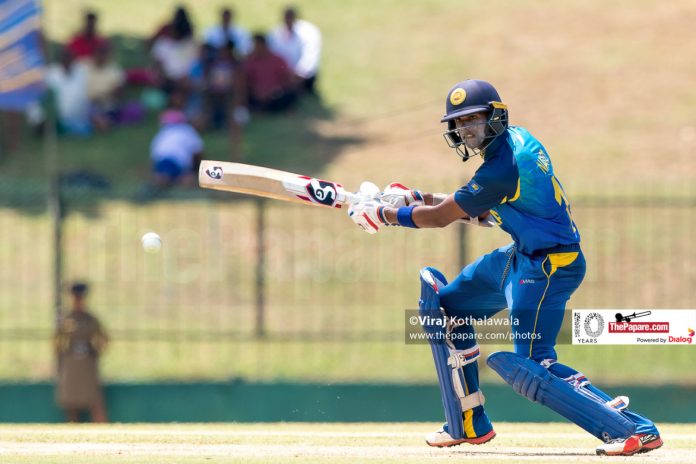 Sri Lanka Under 19s, who had already secured a place in the final of the Tri-Nation Tournament in West Indies, lost their last first-round fixture by 44 runs at the hands of England U19s in Antigua yesterday.

Both Sri Lanka and England came into this game without the pressure of having to win since they’re already in the Final on Saturday. The islanders won the toss and sent in the young Englishmen to bat.

However, number three batsman Jordan Cox played a brilliant knock for the Brits, smashing an unbeaten 105 off 127 deliveries with 7 fours and 3 sixes. He constructed two crucial knocks with Jack Haynes and Luke Hollman during the middle overs to take them to 184 for 4 with only six overs left.

Read: Rewards for Amshi’s fifer missed by a whisker

Sri Lanka’s death bowling came under heavy fire when number six Joey Evison together with Cox pressed the accelerator to rack up 108 runs in the last six overs. Evison reached a stunning 18-ball 50 with 2 fours and 6 sixes as England U19s posted 292 for the loss of 4 wickets from their 50 overs.

After a number of failures in the previous matches, Sri Lankan opener Navod Paranavithana reclaimed his lost form. Paranavithana and Kamil Mishara got the young Lions off to a cracking start, adding 103 runs for the first wicket in just 16.2 overs. Mishara made 40 off 49 deliveries while Paranvithana made a key 73 off 75 deliveries with 9 fours and 1 six.

As wickets continued to fall, Sri Lanka U19s lost their hopes of chasing the score down. Ravindu Rashantha and Sonal Dinusha struck half-centuries to propel Sri Lanka’s chase but it was little too much for the islanders who ended on 248 for 9 in their 50 overs. Dinusha remained unbeaten on 51 off 64 deliveries, while Rashantha scored a 46-ball 52 with 6 fours and a six.

England U19s won four out of their six first round matches, while Sri Lanka U19s won their first three matches, but have lost the last three games. Both these teams will play the final will be played on Saturday (21st December) at the same venue.