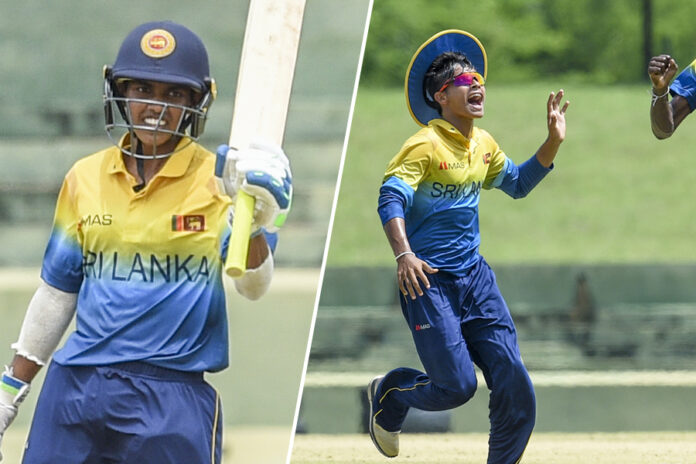 Sri Lanka U19 registered a 148-run win in the second Youth ODI against visiting England U19 at SSC Grounds in Colombo.

Sri Lanka U19 Skipper Dunith Wellalage won the toss and chose to bat first. Chamindu Wickramasinghe and Anjula Bandara opened the innings for the hosts, but the duo could not provide them a good start as both of them were inside the first 5 overs.

The left-handed duo Pawan Pathiraja and Shevon Daniel steadied the ship with a 68-run partnership for the third wicket. After the dismissal of Daniel, Pathiraja was joined by Ranuda Somaratne at the middle, and they built a match changing stand for the fourth wicket putting on 105 runs 129 balls.

The Skipper coming to bat at 6 provided the late impetus to the innings, as Sri Lanka reached 251 for 4 in the allotted 50 overs.

Chasing 252 runs to win, the visitors witnessed a chaotic period from the ball one as they continued to lose wickets at regular intervals, and hurtled to a massive defeat at the end.

The left-arm spinner Wanuja Sahan was the pick of the bowlers for Sri Lanka as he snared 5 wickets for 21 runs. The speedsters Yasiru Rodrigo and Matheesha Pathirana also chipped in with taking 2 scalps each.

With this win, Sri Lanka U19 leveled the 5-match Youth ODI series 1-1, with 3 more matches remaining.