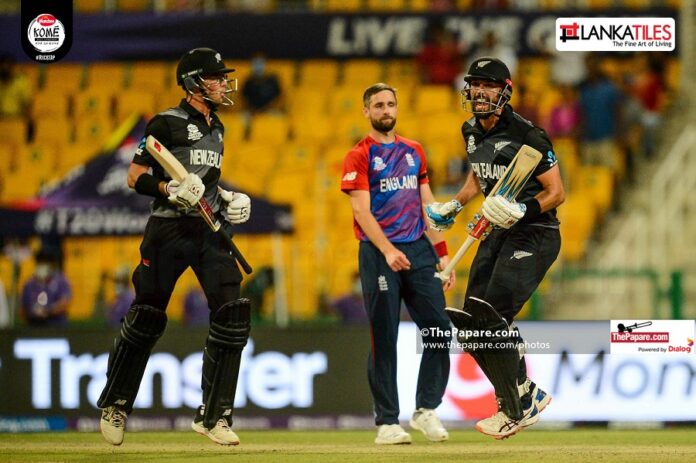 New Zealand stormed into their first-ever T20 World Cup final as Daryll Mitchell struck a brilliant, unbeaten 72 to beat England by 5 wickets in the first semi-final of the ICC Men’s T20 World Cup 2021 worked out in Abu Dhabi on Wednesday.

Chasing 167 runs to seal their place in the finals, opening batter Mitchell made 72 off 47 balls with 4 sixes and 4 fours as the Black Caps reached the target with an over to spare.

Earlier, after being asked to bat first, England got off to a solid start with Jos Buttler and Jonny Bairstow scoring 37 runs for the first wicket. Bairstow departed for 13 courtesy a brilliant catch by New Zealand captain Kane Williamson. The danger man Buttler missed a reverse-sweep and was caught plumb in front as New Zealand leg-spinner Ish Sodhi got the prized scalp soon after the powerplay ended.

Dawid Malan and Moeen Ali rebuilt the England innings adding 63 crucial runs. Malan scored 41 off 30 before bottom-edging a catch behind off Southee as he looked to race through the gears. Needing a big finish to reach a competitive total, Ali and Liam Livingstone unleashed late on to take England to a competitive score. Livingstone’s 17 off 10 did the job for his side as a finisher, while Ali remained unbeaten on 51 off 37.

Chasing 167 runs to win, New Zealand lost two of their most senior batters – Martin Guptill and Kane Williamson cheaply as they were two down for 13 runs.

At the end of the Powerplay, New Zealand were 36 for 2 after six overs, with the Black Caps failing to score a run off the bat for 12 consecutive deliveries at one stage. But Conway and Daryl Mitchell led the rebuild in search of 167 for a place in Sunday’s final, with Conway reaching 46 off 37 deliveries before being stumped off Liam Livingstone.

Glenn Phillips could not connect during his short stay as England crawled their way back into the game. However, Jimmy Neesham, walked in and gave the much-needed impetus with a 11-ball 27 to change the whole complexion of the game. He hit 23 runs off Chris Jordan in the 17th over of the innings which proved to be costly in the end for England. After Neesham departed, Mitchell finished off the game in style, hammering 20 runs in the penultimate over off Chris Woakes.

New Zealand will take on the winners of the second semi-final between Pakistan and Australia in the final on 14th November in Dubai.