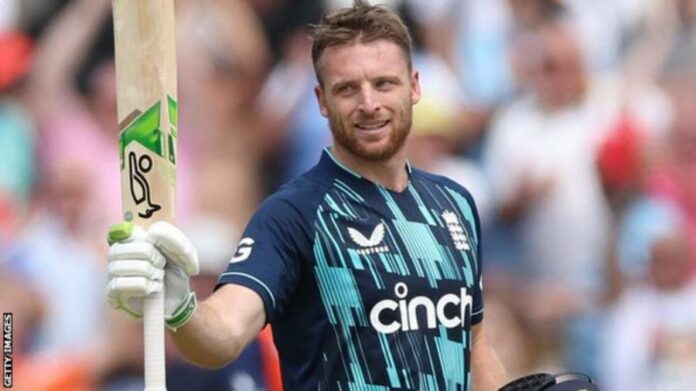 England broke their own record for the highest score in a one-day international with a mammoth 498-4 against the Netherlands in Amstelveen.

In Matthew Mott’s first game as England’s new white-ball coach, Jos Buttler finished unbeaten on 162 from 70 balls as he struck an incredible 14 sixes and seven fours.

Dawid Malan (125) and Phil Salt (122), with his maiden ODI ton, also both made centuries off 90 and 82 balls respectively as the Netherlands bowlers were smashed to all parts of the ground.

A total of 26 sixes rained down on the uncovered stands at the VRA Cricket Ground in Amstelveen, and fans assisted the Dutch players in searching for the ball every time it disappeared into the forest which surrounds it.

Liam Livingstone’s cameo at the end of the innings was just two balls short of the fastest ODI half-century as he blasted fifty off just 17 balls, finishing with 66 off 22 balls.

Fittingly Buttler hit the runs for England to reach the record ODI total, with a six launched over deep mid-wicket off Shane Snater on a miserable day for the Dutch bowlers, with leg-spinner Philippe Boissevain’s 10 wicketless overs costing 108 runs.

“Boring boring England” sang the travelling fans as Livingstone managed only a four off the penultimate ball of the innings to ensure England missed out on 500, but they were soon cheering when he hit final ball of the innings for yet another six over cow corner.

This was the first occasion an ODI between the two sides had been played on Dutch soil, and it was an altogether different experience than the very first time an England XI took to the field here.

A side featuring future stars Alec Stewart, Nasser Hussain and Derek Pringle suffered a humiliating loss to the Netherlands at the same ground in 1989 – struggling to bowl in the drizzle on a slippery coconut matting wicket in their pimple-soled training shoes.

The straw-coloured grass pitch carefully prepared by Benno van Nierop at the VRA Cricket Ground over three decades later was hard, true and perfect for run-scoring on a day when the mercury touched 30 degrees Celsius.

It made Dutch skipper Pieter Seelar’s decision to bowl first baffling to all but the accountants tallying up the beer sales from the raucous 6,000 visiting fans as England recovered from the loss of Jason Roy – bowled by his cousin Snater – off the ninth ball of the innings.

The Netherlands had chances, though. Snater spilled Salt at deep point off Bas de Leede on 40, then three balls later Malan overturned a marginal lbw decision on review after he was struck on the pad by Seelaar reverse sweeping.

Seelaar, at least, was able to account for opposite number Eoin Morgan who, perhaps smelling some easy runs to ease himself back into form, promoted himself up the order only to fall lbw for a first-ball duck.

Even by his own dizzying standards this was quite breathtaking hitting from Buttler, as he struck the ball so cleanly he seemed to be playing a different game to everyone else.

Fresh from a productive stint in the Indian Premier League the 31-year-old is currently the best white-ball batter in world cricket, operating at the peak of his powers.

A caveat to this knock must be placed in the context of the strength of bowling, given England were playing an Associate nation. Indeed, the Dutch did not even have a frontline attack for arguably their blue riband series of the summer.

Fred Klaassen and Roelof van der Merwe were among those who remained with their county sides and will play in the T20 Blast on Friday night. The Dutch federation can demand their mandatory release, but with a small pool of players there is a little appetite from either side to rattle cages.

Nevertheless, Buttler’s knock was stunning. His century came off 47 balls, 150 off 65, as his fast hands and strong wrists proved destructive. The Dutch bowlers simply did not know where to bowl to him, as their brains became scrambled in the carnage.

He offered two chances on 17 and 37 as Vikramjit Singh got finger tips on a high one while Musa Nadeem Ahmad shelled a more straightforward opportunity 20 runs later. It would prove costly.