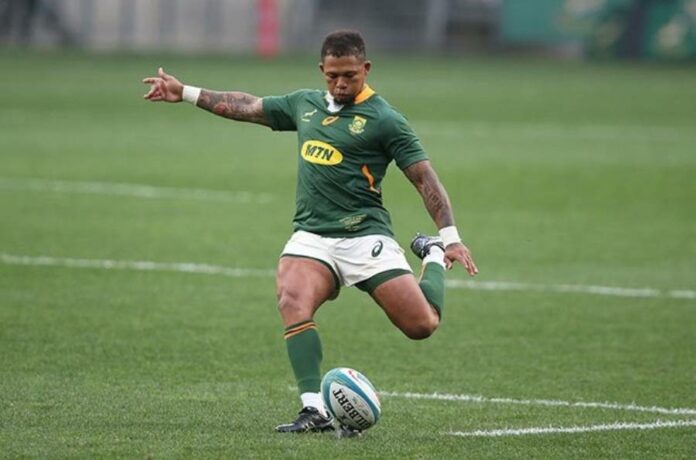 Springbok flyhalf Elton Jantjies sheepishly admitted that they celebrated their 31-29 win against New Zealand in Gold Coast a bit too early.

The Boks earned a late penalty and celebrated the win before Jantjies kicked over the penalty.

The Boks earned their first win against New Zealand in three years and four matches.

Match-winning Springbok pivot Elton Jantjies cheekily admitted that they celebrated slightly prematurely despite beating the All Blacks 31-29 in Gold Coast on Saturday.

When the All Blacks were penalised for offsides deep in their 22 after the hooter by referee Matthew Carley, the Springbok players celebrated as if the game had already been won.

While Jantjies has never looked a player who could repeat what Theo van Rensburg did in 1993 for the Lions (then Transvaal) against Auckland in the Super 10 final when he missed a straightforward conversion, he said it was all about him applying his daily kicking routine.

“With that last kick, I think we celebrated a bit too early,” Jantjies chuckled.

“It was straightforward, so there wasn’t a lot of pressure on me because these are things that we do every single day.

“It was just going through a routine, putting the head down and kicking the ball over.”

The three points weren’t Jantjies’s only contribution to the game. There was a drop goal from nowhere on a penalty advantage while also providing an assist for Makazole Mapimpi.

However, in the event the team needed a drop goal in the absence of a penalty, Jantjies was ready for the opportunity.

“The drop was something I mentioned to the boys, so we needed to make sure that we execute,” Jantjies said.

“If I got an opportunity, I would have definitely gone for the snap drop again.”

Jantjies felt the Boks’ belated success in Gold Coast on Saturday was a result of their narrow defeats in two of the three games in Queensland.

Late penalties in the respective first Australia and All Black Tests consigned them to painful defeats, even though their style of play was questioned in those matches.

Jantjies said it felt like a decade of events happened in the last 10 minutes of the game, but they trusted their discipline and belief.

“We had opportunities to close the game in the other Tests and it happened again in this game,” Jantjies said.

“It boiled down to us being aligned in the last 10 minutes and the last five minutes. That shows you how long the game is.

“There were a lot of things that happened in the last five minutes, but the guys talked about belief at half-time, but we stuck through it and we were disciplined.

“The coach also encouraged guys to take individual opportunities if they did arise.”