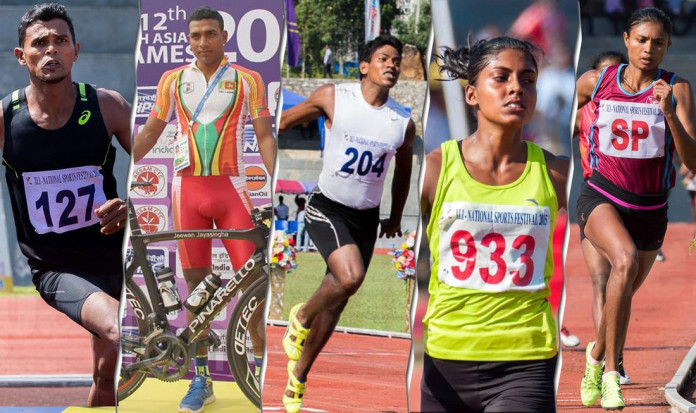 Himasha also broke the South Asian Games Record in the heats with a timing of 10.26secs. He broke the record of India’s Anil Kumara 10.37secs which was set in 1999.

However Nimali was nowhere close to her National Sports Festival Meet Record of 2:05.32mins which she set in December.

Captain of the Sri Lanka contingent Manjula Kumara Wijesekara won the Gold in the Men’s High Jump clearing a height of 2.17m. He was in an intense battle with India Thejaswin Shankar who also cleared 2.17m but Manjula won because he cleared the height with less attempts.

In the Women’s Long Jump favourite N.C.D.Priyadarshani could only muster a 4th place but Sarangi Silva was able to win the Bronze medal with a jump of 5.89m in her final attempt. Priyadarshani only had one jump which was 5.79m while all her other jumps were fouls.

However last December after struggling with foul jumps for a long time, Priyadarshani set a new Sri Lanka record at the National Sports Festival with a jump of 6.43m. Incidentally this was the distance jumped by Mayookha Johnny of India to win the Gold Medal at the 2016 SAG.

In the Women’s Shot Putt event Tharika Fernando won the Bronze Medal with a throw of 14.87m. Manpreet Kaur Jr and Manpreet Kaur Sr won the Silver and Gold medals with throws of 15.94m and 17.94m respectively.

Sri Lanka’s star Cyclist Jeevan Jayasinghe once again proved his worth when he won the Men’s 100km Individual Road Race with a timing of 2hrs 25mins and 39.650secs. Janaka Hematha Kumara missed out on a Bronze Medal after he was placed 4th.

Sriyalatha Wickramasinghe too missed on a Bronze Medal after she was placed 4th in the Women’s 80km Individual Road Race.

Weightlifters continued their medal hunt on day 4 as they won Silver and one Bronze Medal.

Saman Abeywickrama won the Bronze Medal in the Men’s 105+kg category lifting a total weight of 275kgs. His snatch effort was 120kgs and the clean and jerk was 155kgs.

In the Recurve Team event both Men’s and Women’s teams won the Silver Medal.

The Men’s team of Nipuna Senevirathne, Indranath and Sajeev De Silva were narrowly beaten for the Gold by India. Sri Lanka scored 51, 53, and 53 while India bettered with 53, 53, and 55. They comfortably defeated Pakistan in the elimination round and after a close tussle out smarted Bangladesh in the semifinal.

The Women’s team of Dilhara Salgado, Anuradha Karunarathne and Suchini Ubeysiri defeated Pakistan eased through the elimination round against Pakistan and defeated Bangladesh in the semifinal.