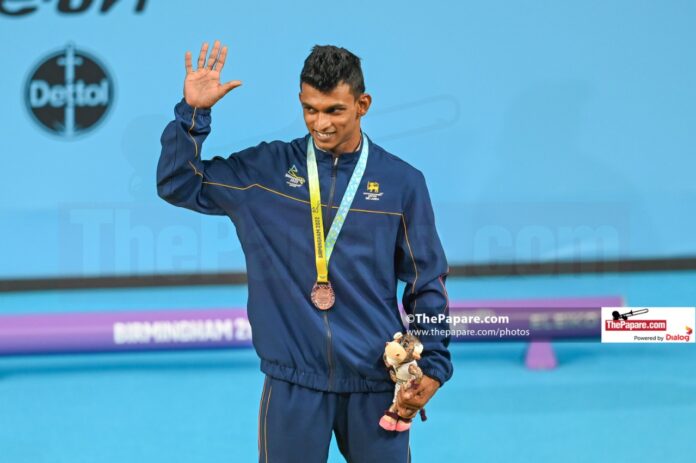 The weightlifting team, which shouldered a larger chunk of Sri Lanka’s medal haul at the previous Commonwealth Games, did the honors of opening the island nation’s medal account at the 2022 games in Birmingham, from the first event the islanders featured in.

One of the five competition venues, the National Exhibition Center (NEC) based in the Midlands is the largest event space in the UK, with the ability to host over 15,000 fans. The NEC is host to six of the eleven sports featured in the Commonwealth Games, with Weightlifting, Badminton, Table Tennis, Boxing, Judo, and Wrestling. Weightlifting was a favorite, with the Weightlifting arena packed to capacity almost every sitting.  The lively crowd was behind every lifter, cheering on their attempts.

Dilanka snatched 106Kg in his second attempt, having not completed his first lift. In his third attempt, Dilanka’s attempt to clear 112Kg, which would have improved his medal chances, was not completed. In the Clean & Jerk, Dilanka’s clearance of 120Kg in the first attempt was enough for him to book a spot on the podium despite his second and third attempts of 137kg & 141Kg being futile.

With a total of 225Kg cleared, Dilanka was placed third behind Bin Kasdan of Malaysia, who won Gold with a total of 249Kg, and Sanket Mahadev of India, who cleared 248Kg to win silver.

Sri Lanka’s hopes of doubling their medal tally were dashed when veteran Thilanka Palangasinghe, competing in the Men’s 61Kg final, was forced to retire due to an injury he sustained during his second attempt in the snatch where he tried clearing 106kg, having snatched 100kg in the opening snatch.

The Commonwealth Games which commenced on the 28th of July will be held across eleven days with a vibrant closing ceremony and the participation of some A-list artists to conclude the games.

ThePapare.com have made the journey to the United Kingdom and will bring the action as it happens from Birmingham. Visit the hub of the Commonwealth Games at ThePapare.com/CWG2022 for complete insight on the Sri Lankan Athletes at the Games.