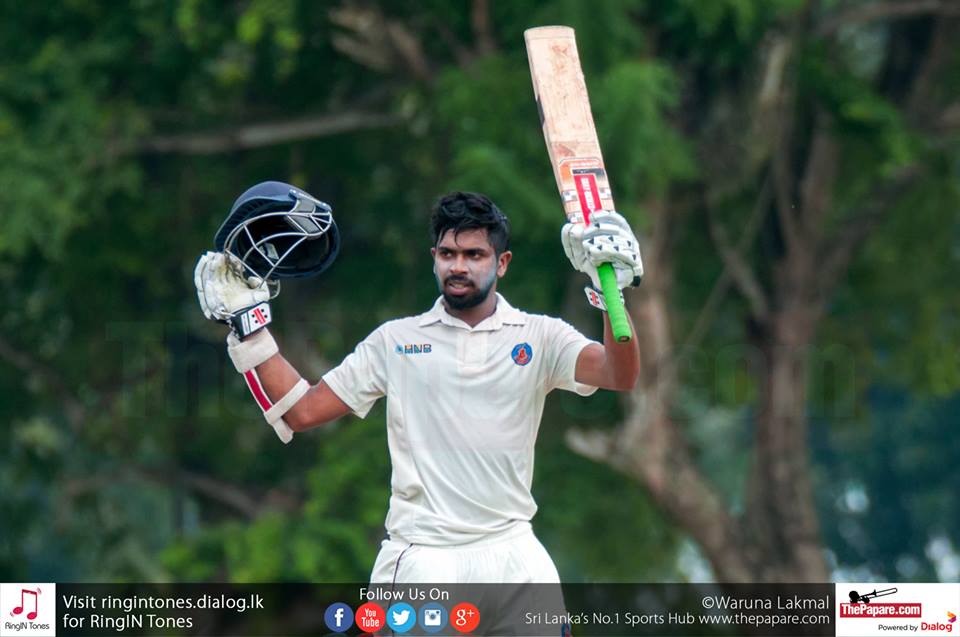 22-year former Trinity skipper Niroshan Dickwella smashed a 156-ball 137 for NCC against Badureliya CC as the hosts’ piled on 437 for 6 at stumps on day one at NCC grounds.

Dickwella’s special knock contain 14 fours and 2 sixes. Young Nimesha Gunasinghe made 90 as he was involved in a mammoth 186-run stand for the 2nd wicket with his home town mate. NCC skipper Farveez Maharoof remained unbeaten on 67 as well.

Brother of TM Dilshan, TN Sampath recorded his 4th first-class ton as Galle took the upper hand in their game against Bloomfield at Bloomfield grounds.

The opening pair of Sampath and Damitha Hunukumbura added 186 before the latter was dismissed unfortunately for 94. Sampath consumed 187 balls for his 100 which included 13 fours and 2 sixes. The visitors ended day one on a healthy position at 285 for 5.

The Soldiers amassed 240 for 8 at stumps on day one against SSC at Maitland Place.

After being 93 for 5, the visitors recovered through young Sanjika Ridma’s fighting 67 which restored the game into balance. Double-arm spinner, Tharindu Rathnayake picked up 3 scalps for the hosts’.

A collective effort by the Chilaw Marians’ bowlers helped them restrict Moors for 201 on day one in their match at Moors grounds.

Mahela Udawatte top-scored for the home team with a patient 66 while veterans, Lahiru Gamage and Dinuk Hettiarachchi picked up 3 wickets each. The visitors were 37 for 2 in reply.

Tamil Union took major honours at the end of day one against defending champions, SL Ports Authority at Colts grounds.

The visitors bowled out SL Ports Authority to 183 with none of the batsmen crossing over 50 runs. Off-spinner Dhananjaya De Silva and left-arm seamer Charith Jayampathi claimed 3 wickets apiece. Tamil Union were 81 for 3 at close of play.

Former Sri Lanka under 19 player smashed 11 fours and 3 sixes but off-spinner Umesh Karunarathne and left-arm spinner Akila Ishanka shared 7 wickets for the hosts. Saracens were 33 for 3 at stumps.

All six matches will be continued tomorrow (27th December) for second day’s play.