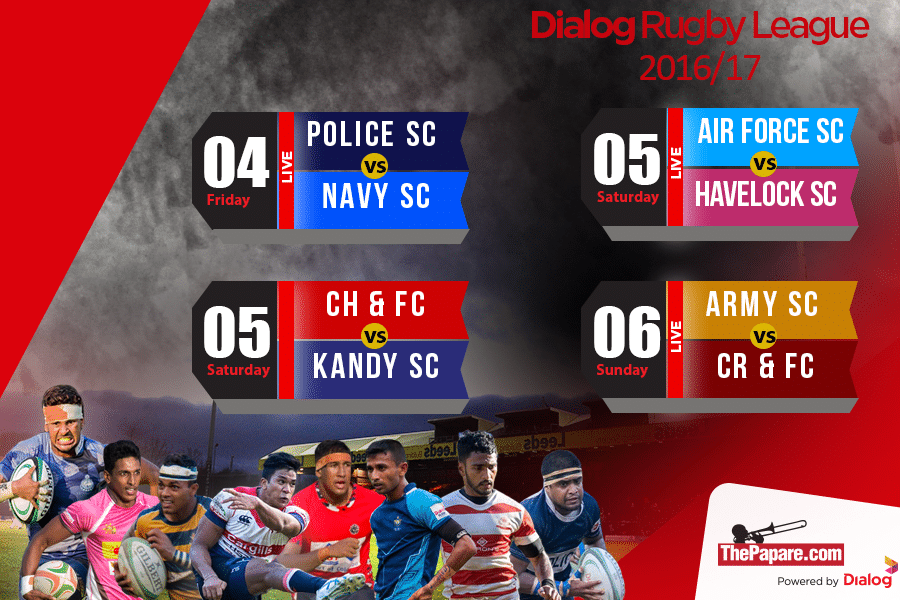 After a fortnight of silence, rugby is back to the island in the form of the Dialog Rugby League (DRL). The fiercely contested league comes alive for the 2016/17 season this weekend as Police Sports Club  lock horns against Navy Sports Club at the Police Park.

The first week of November marks the start to 14 weeks of exciting rugby as the country readies itself to welcome the rugby extravaganza this weekend. A total of four matches will take place this week and is expected to continue through to the next year followed by the Dialog Clifford Cup.

The battle between the fourth and fifth finishers of the last season’s rugby league, Police Sports Club will meet the Sailors on Friday at Police Park. The last time the two teams met in the league was in the second round match at Police Park where the Navy team faced defeat with scores reading 16-11. The first round game last year went in favour of Sailors who won 27-24 at home.

Police will be playing sans their star-studded outfit from last year but will bank on the experienced Mushin Faleel, Abzal Mohammed and Achala Perera to get them into a winning outfit.

The Sailors don’t have too many changes from last season but with Thilina Weerasinghe, Lee Keegal and Chanaka Chandimal turning up in the regular numbers, they should go in as favourites in the league opener.

CH & FC will travel to Kandy for their first game despite being hosts and will face the defending champions Kandy Sports Club at their home grounds. Having won the league title thrice, the Kandyans led by Roshan Weeraratne will be looking to lead his outfit to another success story. Kandy will be looking to test their new recruits that crossed over during the season break and be prepared for the later weeks.

Kandy Sports Club ran riot against CH & FC in the first-week scoring as much as 80 points while CH could only score 3. The second round fixture was no different as CH & FC was defeated 78-13.

Runners-up from last season, Havelock Sports Club will meet the 7th place finisher from last season Air Force SC. The Airmen don’t have too much on their plate except for their two wins with CH & FC last season. While Havelocks align themselves in line to a title contention, it will be important for them to be at full strength when it comes to the important matches such as Kandy and CR & FC.

Havelock Sports Club won both encounters last season with scores reading 36-08 and 38-05. Airforce on the other side will have the likes of Charith Seneviratne and Nuwan Perera to put up a fight.

CR & FC will face the resurgent Army outfit in their first match of the season. Underdogs Army SC lived up to their name in the first round of last season but could not continue their success story forward. Last year’s third place finisher, CR & FC won both of the matches last season cruising to a comfortable 35-15 win in the first round followed by a close 19-13 win the returning round in Diyagama.

CR & FC are revitalised with the likes of Omalka Gunarathne, Kushan Idunil to account for the vacuum created by the departure of Kanchana Ramanayake and Jason Dissanayake but the Soldiers can always bring in the element of surprise.