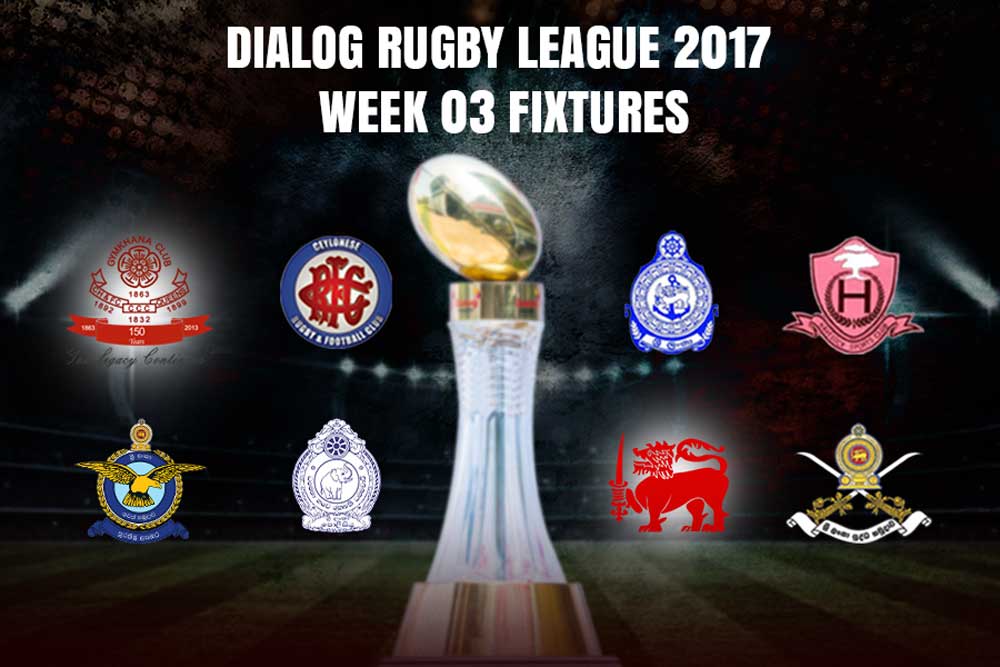 Three teams head into this weekend’s games unbeaten, with all hopes of keeping that tag alive and building up to the crunch end of the Dialog Rugby League 2017/18 first round.

Host CH will be hurting after their second loss this season however, CR will set their sights firm on the opportunity to add insult to injury in this game between the two old neighbouring clubs.

CR beat their arch rivals in the Captain’s game pre-season match but the CH team will surely unleash everything they have got in their bid for a win at the third time of asking.

It would be interesting to see if Lee Keegel would be able to put a dent in Tarinda Ratwatte’s creative play or will Tarinda run circles around Lee?

With the CH three quarter line being starved of the ball in the first two games, coach Laga has made a bold move, switching fullback Maduwantha to the playmaker, no.10 jersey, moving skipper Rajapakse to his usual flanker position. Youngster Maduwantha will face off against the experience of CR’s Chanaka Chandimal.

Charana Sendanayake will be a man to watch out for in the CR team as he was brilliant in attack and defence in the past two games.

The game is heavily tipped in favour of the Longden Place club tomorrow but taking the CH team too lightly could be a mistake CR wouldn’t want to make.

Navy is set to host the Park Club after tasting defeat for the first time this season and Havelocks will be heading into this game with confidence levels high after their two wins in as many games.

Lahiru Herath will line up against familiar foe Nishon Perera as both rising stars will go head to head in the no.13 jersey but the eye catching match up will be between the two half backs, as Richie Dharmapala takes on Sudam Sooriyarachchi.

Havelocks will be without the services of captain Melder after he sustained an ankle injury and was forced to sit out last week’s game. For Navy, the return of Stephan Gregory will be a much needed boost as he made his comeback in the final minutes of the CR match.

The Sailors know that if they are to challenge Kandy, Havelocks and CR & FC for the title, they need to secure as many wins at home.

The lads in Pink will be seeking to keep their unbeaten record intact as they travel down to Welisara in what will see them put up against the sword for the first time this season.

Havelock SC are the favourites heading into this game but home advantage will be a massive factor in favour of Navy as they seek to get back into winning ways.

Both teams will be aiming to register their first win of this season. The home team have lost their coach, adding insult to injury for the team from Rathmalana. Police, another team in disarray having lost their first two games and in dire need of a win.

Without a coach, Air Force looked all over the place while the Cops were helpless against defending champion’s Kandy, as both teams were heavily defeated last weekend.

Though the airmen were defeated they had a few positives to take out of that game. Flanker Radeesha and big prop forward Charles Praveen had an outstanding outing and will surely seek to carry their form through to this vital game against their old club.

For Police, scrumhalf Gomes and Romesh Archcharige were two players who played to their full potential. Archcharige’s work at the line out was wonderful while Gomes’ distribution was immense.

My money will be on Air Force as they play at home but with both teams in dire need of a win it’s hard to separate the two teams and pick a winner.

Kicking off at the same time, Sunday’s double header will see defending champs Kandy play their first home game of the season against a rejuvenated Army side, coming off a well-earned win last weekend.

The home team is just getting into their stride after a good win against Police as they dispatched the Cops in an all-round effort. For the Army team, however, it will be a mountain to climb if they are to come away with anything from this game, let alone a win.

Kandy will be without the services of lynchpin Fazil Marija for this game as well but Nigel Ratwatte proved to be an able replacement and will continue to fill into the no.10 jersey.

For the Soldiers, coach Nilufer wrung the changes in last week’s game leaving out a few experienced players, but the decision to bring them off the bench proved to be the match winning move. It will be fascinating to see what coach Ibrahim has up his sleeve this weekend, in one of the toughest games of the season for them.

Every viewer’s money will be on the home team but if Army are to have any chance, their defensive wall will have to stand firm while they will have to turn every attacking opportunity into points. If they manage to do so, we will be in for a sensational game of rugby up in the Hill Capital.

Kandy coast to 2nd win of the season

“We could have done better” – Gayan Weeraratne