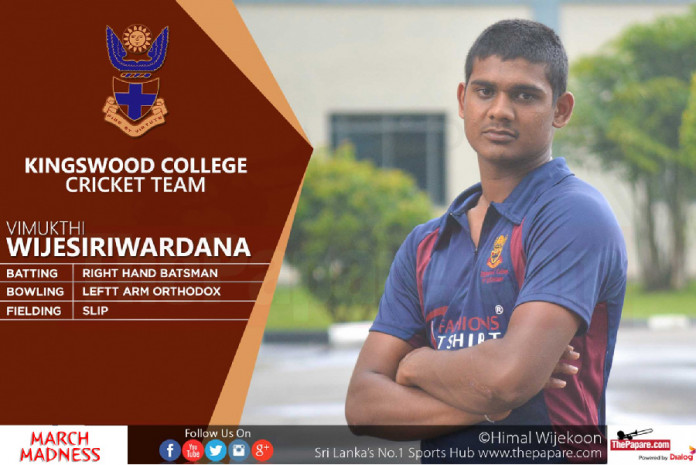 The first day of the 111th Battle of the Maroons in hill capital ended with Dharmaraja College having better chances of securing a first innings win.

There was no rain around today which was rather surprising taking into consideration that rain was ever present the last few days at around the 3 o’ clock mark. Deshan Gunasinghe of Dharmaraja won the toss and elected to field first on a pitch that had a bit of grass on it.

The Kingswood top order was blown apart by the pacemen leaving them 20-3 in the crucial first hour of play. Vimukthi Wijesiriwardena then came to the crease at this point of the game. He was the only batsman in the Kingswood innings to get past the 20 run mark. Vimukthi went on to make an unbeaten 87 runs as the rest of the batting failed miserably.

Kingswood was 40 for 3 and seemed to be building a partnership when Niwantha Herath joined the crease for his off spinners. He turned the table on a grassy wicket with only around an hour to lunch. Within 6 overs the Kingswoodians were 40 for 3 and 50 for 6.

At lunch, Kingswood was looking down the barrel with 64 for 8. Vimukthi Wijesiriwardena then got his act together and put on another 100 runs with the two tail tenders.  The last pair Vimukthi and Ganidu Kaushalya put on 53 runs while 52 runs were added for the 9th wicket. This innings might prove to be the match saver for the Kingwood lads at the end of the encounter. Kingswood not only got themselves some valuable runs but was also able to take time out of the game. They batted for a total of 61 overs before being bowled out for 167 runs.

Niwantha Herath was brilliant getting the ball to turn on the second hour of the day itself and he finished with figures of 4 for 24 while his counter parts Gihan Vitharana and Navinda Dilshan got 2 scalps each. Rukmal Disanakaye and Chathuranga Aludeniya chipped in with one wicket apiece between them.

Dharmaraja came into bat during the last session of play and they managed to get 41 runs for the loss of 2 wickets. Ganidu Hambaragumawa removed the captain Deshan Gunasinghe and the other opener cheaply. Tomorrow will be a vital day for both the teams as they look to secure the bragging right with a first innings victory over each other. Depending on how the game goes in the first session we might even see an outright victory.