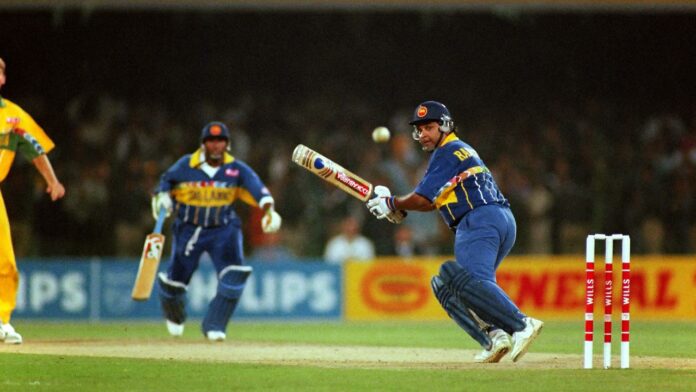 The silver jubilee celebrations of Sri Lanka’s World Cup triumph are just around the corner and after all these years, Arjuna Ranantunga’s side becoming World Champions in 1996 brings back nostalgic memories although there have been other iconic sporting moments such as Susanthika’s bronze in Sydney Olympics, World T20 triumph in 2014, Test series win in England in 2014 and Test series win in South Africa in 2019. It is true that a nation loves its first heroes. But more importantly, 1996 is special as it was a campaign that defied all odds.

This is how Sri Lanka defied some of those odds.

At the final selection meeting to pick the team, the selectors wanted to leave Muttiah Muralitharan out of the squad. But skipper Arjuna Ranatunga argued his off-spinner’s case. Unlike the present day, in 1996, the World Cup squad only comprised 14 players. Duleep Mendis the selection chief felt that if Murali were to be called again for throwing, the campaign would derail.

Apart from being the nation’s best spin bowler, there was one more reason that made Arjuna battle for Murali tooth and nail. The chucking controversy in Australia just a month ago had been a huge unifying factor and Arjuna wanted that team chemistry to work.

Confident of their batting depth, Sri Lanka opted to chase when they won the toss. This they did even in the World Cup final, despite knowing that a team batting second had never won a title before. That was even after Arjuna had been warned against chasing by, of all people, Imran Khan.

“As I walked out for the toss, Imran asked me what are you going to do? I said I am going to chase. Imran said, don’t do that. You should bat first. I was left in a dilemma. Here’s the guy who had won the World Cup before me and knew Lahore like the back of his hand. How can I go against his words,” Arjuna told our Legends segment. Eventually, he decided to back his gut feeling and it proved to be the right decision with Australia’s spinners unable to grip the ball in the night.

Backing Sanath Jayasuriya all those years; not just by arguing his case at selection meetings, but providing him shelter and food during his stay in Colombo was a masterstroke. A purist – Colombo’s cricket elite was full of them at that stage – saw Sanath’s technique as a mess. No way was this good enough to succeed in international cricket. But Arjuna saw someone who could hit the ball a mile. Someone who could bring a new dimension to cricket. Someone who had little footwork but immense power in his wrists to crash the ball square of the boundary. Hence all that backing. He would get his reward in the biggest competition of them all – the World Cup – where Jayasuriya was Player of the Series.

The done thing in that day and age was to build up your innings and then throw the kitchen sink in the last ten. Sri Lanka did it the other way around. They were defying all odds and logic. It didn’t go to plan all the time. But what it did was to instill fear among opposition. When it didn’t go to plan, the batting had the muscle to put enough runs on the board.

Not until Sri Lanka reached the quarter-finals did their fans start looking at this seriously.

Having topped the group, Sri Lanka were going to avoid both South Africa and Pakistan in the quarters. England were going to be their opponents. This looked a walk in the park, but Sri Lanka were not used to playing those high-pressure games. They did lose their way a bit after Jayasuriya’s  swashbuckling display (82 off 44 balls).  But the cool heads of Arjuna and Hashan Tillekeratne saw the team home by five wickets. Such was the Jayasuriya devastation early on that Sri Lanka won with 56 balls to spare.

Anyone who has gone to Calcutta knows the love Bengalis have for cricket. Indian cricket supremo Jagmohan Dalmiya when once told that T20 cricket could bring back fans to the sport, informed the British journalist that when a Test match was happening in his native Calcutta, there were 110,000 people inside and 50,000 people outside the ground.

The semi-final was a high-pressure game and both openers were out in the first over – caught at third man. There was little hope following such a poor start. But this was a team that was willing to back their unpopular decisions. It was time for the team’s think tank to rise up. Aravinda de Silva did so admirably.  A target of 252 proved beyond India who collapsed losing seven wickets for 22 runs. The 110,000 fans were stunned to silence. Then the riots started.

There was some aura about Shane Warne.  He was Sri Lanka’s biggest obstacle in the final. Those days, veteran broadcaster Kelum Srimal used to call it ‘Warne bhithikawa’. The leg-spinner set up batsmen smartly. Sri Lanka countered their biggest challenge by telling their left-handers to go after his bowling.  Both Asanka Gurusinghe and Arjuna did that as his ten overs went for 58 runs but fetched no wickets.

This was a special team that played special cricket. They feared none.  Given their troubles down under a month back, the players had been mentally prepared for their biggest challenge in the sport. They wanted to do only one thing. Beat Aussies in the final.

Sir Richard Hadlee had predicted the possibility of Sri  Lanka winning the title, but then, even the most ardent Sri Lankan fans  had their doubts. The reason for that being that the biggest thing their team had won until then were a couple of tri-nation competitions. But possibilities in sport if you believe in yourself and put in the hard work are endless. Sri Lanka showed that 25 years ago.