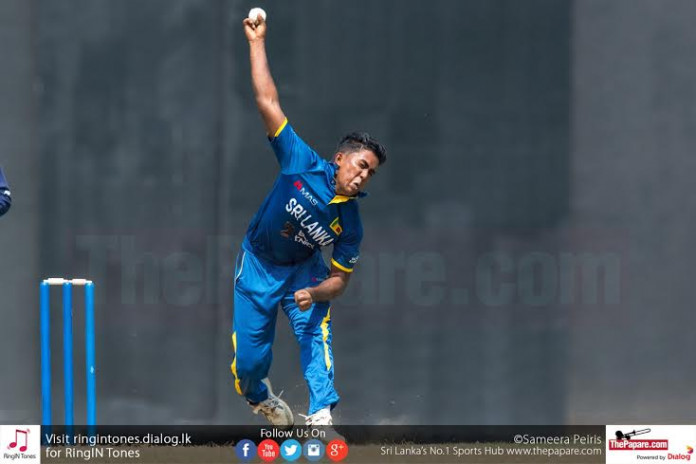 Asitha, making his 1st class debut, was the highest wicket taker at the recently concluded Under 19 World Cup. He registered a match bag of 7/75 which included a 2 wickets in the 1st innings that helped Sri Lanka A claim a 22 run lead.

Pakistan A was crumbling at 38 for 5 at stumps on day 2 chasing a target of 154. The Lankan bowlers did exceptionally well to rattle them late in the day and carried that momentum early on day 3 as well. It was Asitha Fernando who made the early inroads into the Pakistani lower order with the wicket of set batsman Jaahid Ali. Jaahid was top scorer for the Pakistani’s with a fighting 38.

The Pakistan A batters just couldn’t form any worthwhile partnerships and ultimately they were bundled out for just 120 runs. Spin bowling all-rounder Sachith Pathirana was amongst the wickets yet again as he, along with Vishwa Fernando, played the supporting roles to the marauding Asitha.

At the end of day 2 both teams would have fancied their chances, with Sri Lanka A holding the slight edge.

Early on in the match Sri Lanka posted 299 thanks to a timely half century by Mahela Udawatte and  in reply Pakistan A were bowled out for 277; Mohommad Nawaz was the top scorer with 68. Pakistan A came back into the game courtesy a brilliant performance with the ball in the second innings when they managed to bundle out Sri Lanka A for just 131 runs.

The two teams will meet again for the 2nd unofficial which is set to begin on the 10th of July at Worcester.