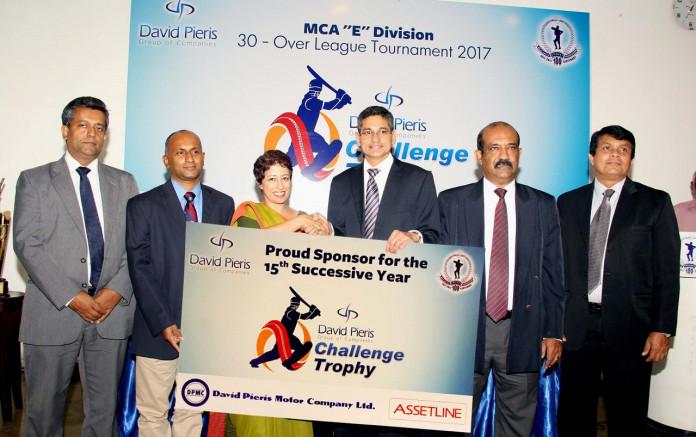 David Pieris Group of Companies will power the MCA “E” division 30-Over League Tournament 2017 for the 15th successive year.

This is the 2nd longest running partnership in the history of MCA, only next to the MCA Premier League.

The following 36 teams, pooled into 06 groups will vie for the glittering “DPGC”  Challenge Trophy offered by the sponsor.

The tournament will be conducted in 02 stages – “League” and “Knock-out”, consisting of 105 half day matches including the Final.

The Knock-out stage will be staged with the top 16 teams from the 06 groups. The Pre Quarter finals will be on 11th March, the quarter finals on 18th & 19th March, the semi –finals on 26th March and the Final on 01st of April at the MCA Grounds.

The MCA Tournament Committee has upgraded the tournament by introducing the D&L method also made another important decision to appoint a Match Referee for the entire span of the tournament; earlier, Match Referees were appointed only from the Quarter Finals onwards.

Special Awards : The  04 special awards on offer are for the best batsman, best bowler, man of the final & man of the series.

The sponsorship handing over ceremony, together with the Media Conference was held on Wednesday, 25th January 2017 at the MCA Lounge, 6.30 pm.