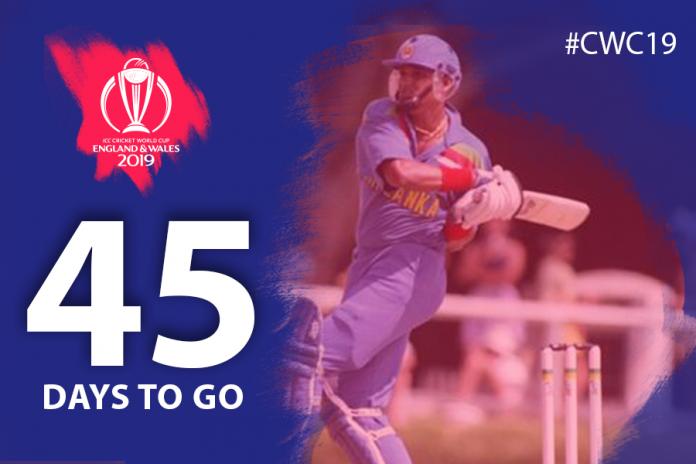 Sri Lanka had a disastrous World Cup campaign in 1987 where they failed to win a single game. Drawn alongside West Indies, Pakistan and England, the Sri Lankans lost all six encounters.

For the next edition in 1992 in Australia and New Zealand, with a different format where each team had to play all other teams once in the group stage, they were at least expected to beat Zimbabwe, still not a full member of the ICC. Sri Lankan fans expected their team to cruise past David Houghton’s side. But that wasn’t the case.

Andy Flower is easily one of the best batsmen to have played the game for Zimbabwe. He averaged 51 in Test cricket and for a period of two years from 1999 to 2000, he was the best batsman in the world. His ODI debut was against the Sri Lankans in the 1992 World Cup in New Plymouth.

The little heard of South African-born opening batsman posted an unbeaten hundred on debut. His 115 not out helped Zimbabwe set Sri Lanka a target of 313.

Now in this day and age, that’s a total a team would chase down eight times out of ten. But in the 1990s it was a different ball game altogether. Zimbabwe had every reason to fancy their chances. Leave alone chasing down a target of 300 plus, no team had scored 300 runs batting second before that. But there was the ice cool Arjuna Ranatunga, the man for a crisis.

Sunil Gavaskar, one of the commentators at the World Cup had said prior to the tournament that there were two batsmen who could win a cricket contest for their teams no matter how hopeless the situation was. One was Javed Miandad and the other was Arjuna Ranatunga. It was time for Arjuna to live up to those expectations.

Roshan Mahanama (59) and Athula Samarasekara (75) had given the team an electric start adding 128 runs for the opening wicket. But Zimbabwe had wrestled back the initiative leaving Sri Lanka needing 100 runs in the last ten overs with five wickets in hand. Zimbabwe had a habit of overcoming fancied teams. In the 1983 World Cup they had beaten Australia. In the 1992 edition, they beat England. Sri Lanka too looked like they were going to be their prey.

This was the ideal situation for Arjuna though. He ran those cheeky singles, toyed with the bowling, and expertly used the short square boundaries to his advantage.  He found the boundary ten times, hitting 88 not out off 61 deliveries.

Early on in his innings, Arjuna let Sanath Jayasuriya do the scoring. Jayasuriya, aged 22, smashed 32 off 23 balls with two fours and two sixes. Then followed a 51 run stand with Hashan Tillakaratne as Arjuna took the fight to the Zimbabweans.

With four balls remaining, fittingly, Arjuna hit the winning runs. These had been tough times for him and to guide the team to such a tense win was special. Arjuna had been axed as captain following Sri Lanka’s tour of New Zealand the previous year. He was suspended for the tour of England in June 1991 and was making a comeback. It was a memorable comeback. Checkout Arjuna’s legends interview with ThePapare where he recalls the tough times.

Arjuna wasn’t the captain for the 1992 World Cup. Sri Lanka were led by Aravinda de Silva. But after the World Cup, Aravinda stepped down and Arjuna took over again. He literally ran Sri Lankan cricket for the next seven years. There were some memorable moments during those seven years which culminated with the 1999 World Cup. Arjuna was sacked after Sri Lanka failed to qualify for the second round in 1999. He never played ODI cricket again.