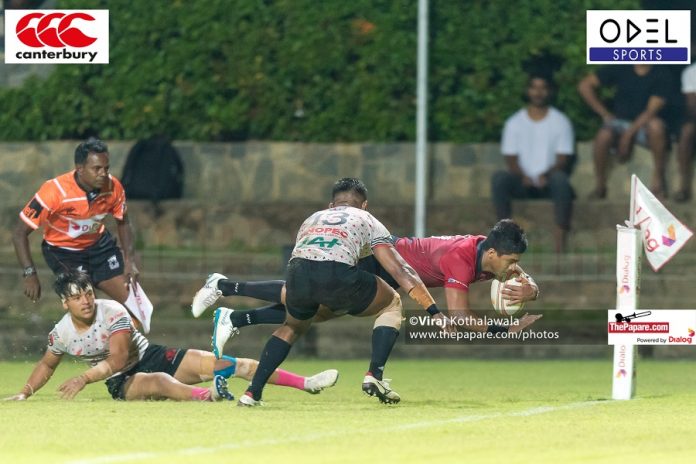 The full-time whistle saved CR & FC as CH & FC’s late comeback came to a premature finish sending the Longdon Place club to finish on top in the final week of the Dialog Rugby League encounter, played at the Colombo Racecourse.

The game was CR & FC’s to win, taking into consideration their impressive first half performance but come the middle stages of the 2nd half, the CR & FC team back-peddled paving way for CH & FC to anchor a comeback.

CH, opted to start their second string team giving them some game time before the season comes to a close.

The Reds had complete control of the 1st half with Ratwatte drawing first blood with a 45m penalty.

CH & FC’s reply was a strong one with Avishka Lee scoring a converted try, completely blindfolding the CR line.

Fighting back, CR’s Wajid Fawmy broke the line of defense in the corner to score the team’s first. Switching directions, speedster Reeza Raffaideen brought the side their second in quick succession.

The Ratwatte-Reeza combination saw new hope and a perfectly timed set piece from Ratwatte saw Raffaideen scoring his second. With Ratwatte adding another penalty, CR & FC had a commanding 23 points under their belt.

CH had two tries to finish the half, one off Avishka Lee and the other coming off Pulasti Dissanayake who scored from a rolling maul.

The second half saw coach Ronny Ibrahim bring back his experienced campaigners to the side and that propelled the turnaround.

However, Tarinda Ratwatte had other plans.

In a lapse of 15 minutes, the fly half had got himself over the line twice with two brilliant tries and later added three points skyrocketing CR’s winning probabilities.

1 of the 2 tries were converted and CR looked very confident with 38 points.

With CH’s Sudam Sooriyarachchi entering the field, things took a different turn. Over went Nishon Perera on the far corner and his national captain followed him with an exhilarating break from the midfield to score right under.

To cap it off Sudam Sooriyarachchi brought in his cameo to score his 11th league try and the team’s 5th. Samuel Maduwantha converted all 3.

With the scoreboard reading 33-35, CH & FC were desperately on the lookout for the win but unfortunately ran out of time as referee blew for full time.

Despite the outcome of today’s game, CH & FC will finish third in the Dialog Rugby League 2018/19 and the winning team, CR will have to be contempt with 4th place.