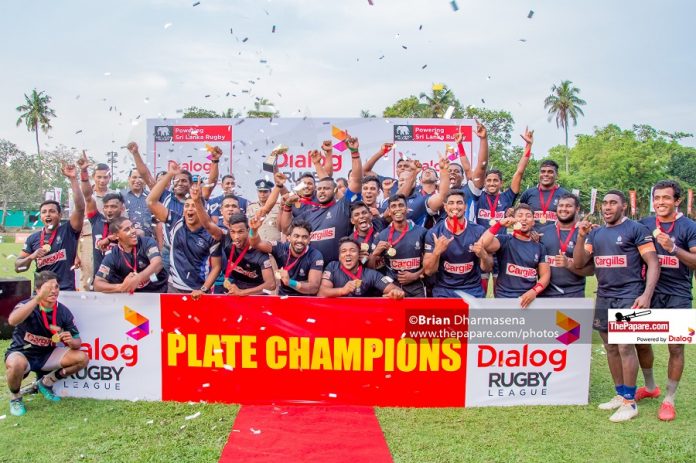 Police Sports Club came from behind to hammer a half century against a sorry Army Sports Club outfit to clinch the Plate Championship 50-27, rounding off their respective Dialog Rugby League campaign for the 2018/19 season.

Army Sports Club made four changes coming into the decider for the Plate Championship while Police made a single change, hoping to stick to more of the same for the Cops which saw them get the better out of a strong Navy team on their way to a virtual Plate final.

The game saw 77-points being scored in 80 minutes as Police Sports club comprehensively outplayed Army Sports Club in a resurgent second half.

The Cops got off to the best possible start scoring through Gihan Silva after a break from the mercurial Emosi Vunivosa. He got the better of his opposite number from a set play off a scrum, drawing the last man and setting up Silva for the opener. Janith Chamdimal made no mistake from under the sticks to make it a perfect 7. (Army 0-7 Police)

Sudaraka Dikkubura seemed to have butchered an opportunity to draw level as former Josephian winger Janith Chanaka made a crucial try saving tackle.

Nonetheless, moments later Rizvi Mohomad pounced on an opening, to dive over from close range to level out the early Police score after Isuru Medagedara – coming into the run on XV to replace Gayan Salinda – knocked over the conversion. (Army 7-7 Police)

Medagedara pierced the posts for three further points after Police were penalized for indiscipline at the breakdown and made no mistake converting their next try moments later as Police was reduced a man; Skipper, Udara Suriyapperuma saw yellow for stamping an opponent.

Danuka Wijethilaka was the try scorer as Army found their feet the quickest and got into a 10-point lead early on. (Army 17-7 Police)

Police fought their way back with an unconverted try from Janith Chandimal, however, yet another moment of indiscipline saw Army continue with a seven-point lead. (Army 20-12 Police)

Both teams were quick to point to the posts when give an opportunity with the intention of accumulating points in this do or die encounter.

Emosi Vunivosa added a 5th combine try in the first half. Army themselves were reduced a man as former Vidyartha man Dhanushka Thalwatta was sent to the bin. Sachith Silva added the extras as the Fijian magician looked to be assuming control of proceedings.

Trailing by a single point at the break, Police came in with a plan and executed it in magnificent fashion.

Gihan Silva was the first score one-of-five tries in the second half – his second of the game – for Police as they assumed the lead in the game only for the second time as Sachith Silva continued with a sublime kick from the touch line. (Army 20-26 Police)

Janith Chandimal and Sachith Silva scored in quick succession as he and his Police mates broke the back of Army, leaving the home team in search of answers.

Chandimal broke from inside his own half, running the restart to score an individual brilliant try as the Police lead was stretched further. Sachith Silva missed from a similar position to his previous conversion as the game slipped away from the grasp of Army. (Army 20-31)

In similar fashion to his 2nd try, Chandimal broke after receiving a restart, this time setting up Sachith Silva as Police Sports Club’s 6th try of the evening silenced the Army faithful. Chandimal added the extras. (Army 20-38 Police)

Army’s defense was under the microscope and failed to hold firm as this time Janith Chanaka made a scintillating break from inside his own half, beating 5 would-be tacklers to set up Udaya Sanjula to put the result out of the reach of the home side.

ThePapare.com Player of the Match Janith Chandimal added the conversion and scored his hat-trick of the evening, an unconverted try as Police raced towards the 50-point mark, leaving Army in search of answers. (Army 20-50 Police)

With nothing going their way, Army made one final dash towards the Police whitewash, scoring a consulting try through skipper Upul Abeyrathna to end the game in disappointing fashion, however, Police Sports Clubs comeback was complete, as the Cops completed an astonishing turnaround to secure the Plate Championship through the virtue of finishing on a superior head to head count against Army, even though both teams ended the season with a similar number of points on the table.